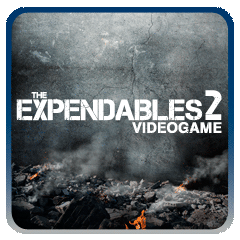 It Lives Down To Its Name

The last of the big summer movies arrives to wind down the season and hint solemnly at more books, homework and classes. The Expendables 2 combines a dream team of classic and contemporary action heroes in one big cinematic brouhaha, and, as befits such spectacles, it’s got the obligatory tie-in game to accompany it. And if you were expecting another rushed, cheap, poorly conceived cash-in just to rope in uninformed gamers that equate a beloved franchise with “Everyone that has the same name on it must be good,” then… you’d be bang on.

The Expendables 2 Videogame tries to play it safe by going for that most fundamental of arcade experiences, the multiplayer shooter. This is a game in the same tradition as top-down/isometric shooters like Ikari Warriors and Commando. You control one of up to four of the Expendables, with the Sylvester Stallone and Jet Li characters voiced by sound-a-likes (a very drunk sound-a-like in the case of Sly) while Dolph Lundgren and Terry Crews actually got roped into providing genuine voice work for their respective characters. The disposable story is a prequel to the movie, with the crew needing to get a hold of information for the next mission from an uncooperative sniper. If machismo and twee one liners were like spray on aerosol cheese in a can, this game would be flooding the room in about four minutes.

The game allows for up to four players simultaneously, either online or locally, which is a nice consideration. However, the simplistic leveling system (you can upgrade health, weapons, etc) and gratuitous, non-stop violence are let down horribly by a fundamental lack of understanding in how shooters work. With the exception of Dolph Lundgren’s character, who uses a sniper rifle equipped with a laser sight, the rest of the characters suffer from an inability to really aim and shoot properly. Most shooters will either aid players with a targeting reticle to show where their fire will go, or else give visual aids in the form of “tracer fire” to show exact line of fire for guns. Expendables does neither of these things, relying instead on a Call of Duty-ish snap assist that provides a soft lock on to enemies so you just pull the trigger and fire. This works fine in an FPS where what you’re looking at is the same general direction as your gun, but in an isometric setting, with twin-stick shooting mechanics implemented, and hordes of enemies coming from every direction, it becomes extremely difficult to differentiate your fire from that of your buddies.

This misstep in the fundamentals is further compounded by the RPG elements that actually allow the game to become easier as you get further. Boosting your health, movement and weapons when enemies don’t become appreciably tougher unbalances the game to a noticeable degree. The level design itself isn’t particularly inspired, taking the heroes from one repetitive shoot out to another, occasionally interspersed with the now mandatory chopper-with-vulcan-cannon sequences that permeate all contemporary military shooters.  There are also bugs in the game from bad voice/lip synching to environmental glitches.

Ultimately, for $15 (or $12, if you’re a PS+ member), The Expendables 2 Videogame is not a great deal, especially when such a recent, refined shooter like Dyad is also available to Sony owners as part of the same summer promotion. It’s a by the numbers, uninspired, twin stick shooter that doesn’t even get the shooting right. This is really only worth it if your idea of a good time is listening to a drunken Sly Stallone slurring his way through another exclamation of “IT’S KILLIN’ TIME!” Everyone else is probably better off putting that money away towards viewing of the latest Batman movie.

The Expendables 2 Videogame tries to play it safe by going for that most fundamental of arcade experiences, the multiplayer shooter.
REVIEW SCORE
5
File Under: Action, Adventure, PlayStation