It’s Trials, But With Loot Boxes 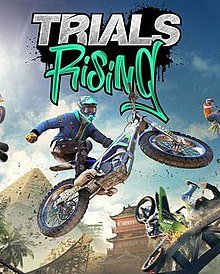 Every entry in the Trials series typically offers a similar and effective package: a large collection of tracks filled with explosive obstacles and an excellent 2D bike simulation to master. I enjoyed returning to this frustrating yet addictive process of learning, replaying, memorizing, and mastering levels in this strange bike-racing platformer hybrid. But with Trials Rising, Ubisoft tarnishes the experience with loot boxes, dreadful aesthetics, and a contrived leveling system. It’s a design choice that nearly ruined the experience for me and continues to frustrate me…as I continue grinding out gold medals in spite of myself.

Nearly two decades after the original Trials flash game was released, the series has had little need for any drastic change in form. Trials Rising is yet another excellent collection of tracks filled with outrageous obstacles and built for a near perfect motorcycle physics system. The system, though complex, is deceptively straightforward; you are a cyclist trying to complete stunt-heavy tracks with the best timing you can pull off without busting ass. Each new track requires extensive replaying and memorization to achieve a gold-medal rating, but the process is made all-but-painless with a snappy checkpoint system. It’s a familiar trial-and-error experience, one that kept me in the loop of replaying levels, then popping into “one more level” for hours.

Though environments are built with three-dimensional objects, your cyclist drives along a 2D plain, meaning you can only control them by pumping the gas and leaning forward or backward. It’s a minimalistic number of inputs, but the physics behind the bike’s weight, the resistance of its shocks, its agility, its momentum, and so many other factors all conflate to create an infinitely complicated and realistic experience.

This realism in bike physics is counterweighted with absurdities in level design. Throughout the over 100 tracks in Trials Rising, I have scaled mountains, ridden a mobile construction tractor, mounted a 16th century sculpture, and have been launched off countless exploding platforms. One level had me riding on top of moving train cars transporting explosive oil drums. Even as I got used to certain obstacle designs and tropes, I was regularly amused by each track’s surprises.

I spent the first third of my time with Trials Rising playing it the wrong way. I had earned gold-medal ratings on every track I had encountered—many of them on my first try—by gunning the gas of my Squid bike, touching the sky off every ramp and executing multi-flips each time. The crowds cheered, as did my Evel Knievel impersonating avatar, and I got a blast watching him either land these spectacular tricks or ragdoll into some gnarly busts. Such was my enthusiasm for Trials’ exceptional tracks and bike physics, it took over eight hours of playtime before I realized how detrimental my flare was for my track completion times.

Underneath the lighthearted absurdity is a sophisticated motorcycle sim and platformer.

Once I unlocked the third bike—the springy and high-powered Mantis—the true essence of Trials revealed itself. After completing dozens of tracks with explosive spectacles, I was all of a sudden asked to reign in my cyclist angst, lay off the gas, and learn more subtle tricks like bunny hops and rear wheel bounces. The tracks began to yield fewer star-jumper ramps and more minute obstacles, ones that required light touches on the triggers and joysticks to circumvent. After spending several hours acclimating to the game’s meathead tone, it’s a pleasant surprise to find an elegant challenge hiding underneath the dirt.

Trials is a fun experience, and has been one I’ve enjoyed since my introduction to the series in 2012 (Trials Evolution). But this iteration is bogged down by a contrived leveling system and microtransactions. Cosmetics are locked behind either in-game currencies or loot boxes, called Gear Crates. While I earned these regularly as I leveled up, the contents seemed to most frequently be stickers or duplicates of biker clothes or bike parts I already owned. I must have cashed in the same green-ish denim jacket a dozen times now. In order to get what I really want from the marketplace, I’d have to purchase the items directly with either in-game currency or Acorns—Trials Rising’s real-money premium currency. That said, I never wanted any of the abhorrent cosmetics available through the store more than my Evel Knievel outfit; the whole marketplace ended up being little more than a nuisance tainting my experience in between tracks.

More offensive was the leveling and content-unlock system. Having to wait until I was level 42 before accessing the Bunny-Hop tutorial tracks meant having to actually learn how to Bunny-Hop on my own to reach level 42. Local multiplayer was technically unavailable until I’d unlocked enough tracks to fill a three-track heat; this took roughly ten hours of play. I understand locking certain bikes behind a leveling system, as it takes a certain skill level to handle the more powerful rides, but it was extremely frustrating to find myself barred from competing with friends early in the game. (Online multiplayer was not available by the time of posting.)

Other multiplayer features include online ghosts and the tandem motorbike. Except for the multi-lane tracks, each track comes with up to three user ghosts a la racing games, which are displayed as transparent bikers racing alongside my avatar. The trials seem to be chosen arbitrarily, as they were far too easy to beat to be top leaderboard players, so I’m unsure what it is they’re supposed to offer besides instinctive competition. Proving to be more of a distraction than an interesting challenge, I quickly turned the opacity down on these riders and never gave them a second thought.

The Tandem Bike was also only an ephemeral joy; though giving two players control over the same bike made for a hilarious spectacle at first, it quickly became clear to my friend and I that the heavy bike was not balanced for any levels past “easy” rating. It only took two levels with un-jumpable gaps for us to give it up as a funny, yet regrettably broken gimmick.

When looking at the core gameplay, Trials Rising is just as addictive and entertaining as any of its predecessors, and I was happy to spend hours chipping away at its 100-plus tracks. But everything in the game’s peripherals–the loot boxes; the level-locked features; the cheap, ugly cosmetics–sullies the experience. That said, for anyone that has not experienced the frustrating, absurd, highly rewarding joys of this motorcycle platformer series, these gross attempts at monetizing Trials are but a crass addition to what is ultimately another successful entry in one of the most inventive platformer series I’ve ever played.

Trials Rising, another excellent racing platformer hybrid, is bogged down slightly by an ugly loot box economy and an unnecessary leveling system.
REVIEW SCORE
7
File Under: