I still can’t believe we, as gamers, have this many fighting games to choose from. With a resurgence of the genre on Steam this year alone combined with the biggest EVO showing to date, it’s a great time to be a fan. There’re just so many games to choose from, with even “western” themed fighters like Killer Instinct giving players a respite from the so-called “anime” category that typically dominates the scene. But there’s always room for more anime fighting games, including Under Night In-Birth Exe:Late‘s recent Steam release.

French Bread (the actual developer, as Arc System Works is merely publishing) is no stranger to fighting game development. They’ve crafted the well-known Melty Blood series as well as Dengeki Bunko: Fighting Climax, and really come into their own in the past several years. The Under Night franchise itself has had several years of fine-tuning, the culmination of which is one of the most accessible entries to date. 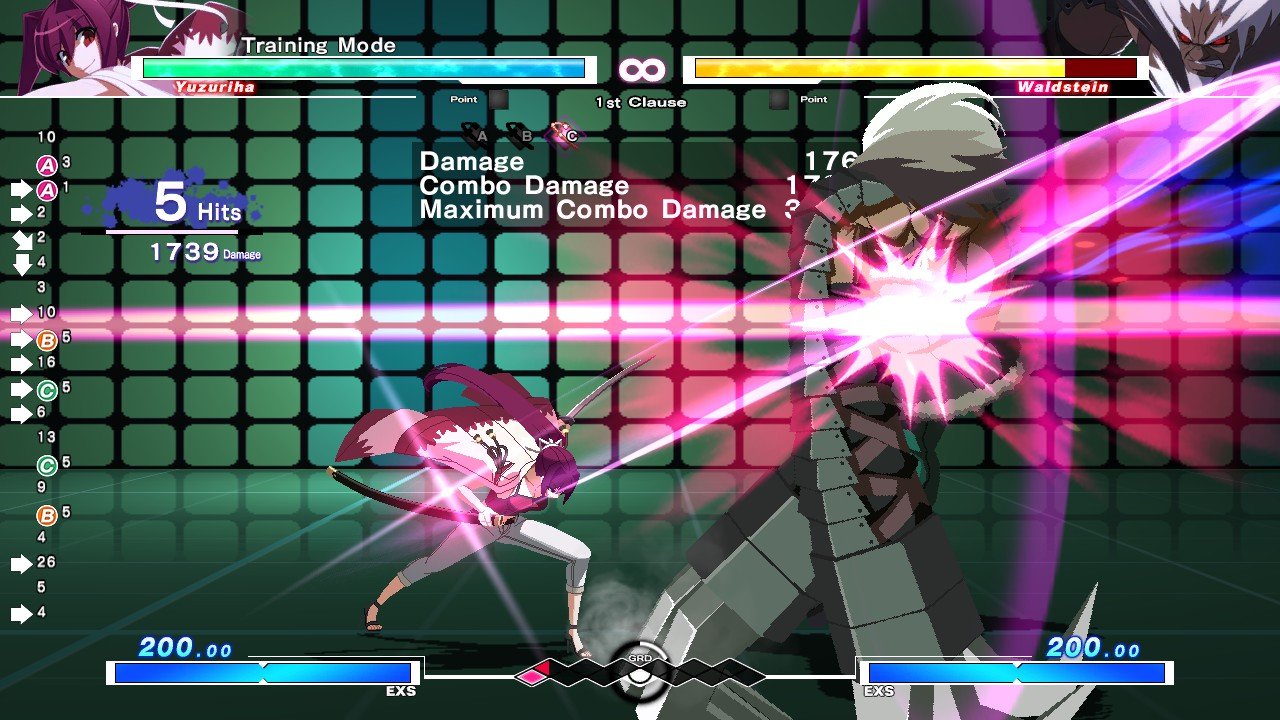 Under Night In-Birth Exe:Late is a fast game, yes, but accessible. Players can air dash and flutter about the sky, but they’re never out of control and commands for all 16 characters are manageable, as most of the characters have access to a variety of zoning and combo tools (with a weak, medium, and heavy three-button setup). Much like Guilty Gear‘s tension system, Under Night’s fighting system encourages people to play aggressively, granting them Grind Grid meter (GRD) for performing actions and taking it away for retreating or taking damage. If you happen to have more GRD, at certain intervals (roughly 15 seconds) you can dole out additional damage or choose to boost your super gauge.

No, it’s not a new concept, but it’s a mechanic that I adore in that it generally creates more intimate matches, especially when playing with strangers. If you’re too reckless, you’ll just get punished into oblivion, but it’s the mindset that I dig. The way attacks can be chained is also very intuitive, as many characters have a super of sorts tied to their heavy attack, with multiple variations set to the light and medium buttons. In other words, you can use the same command to send out, in some cases, four or five different abilities. It’s not too taxing to actually perform them, but it is a lot of memorization. Half of those characters, mind, have an amazing set of animations and designs (like the intimidating Waldstein with his giant claws, or the freaky Merkava), but the other half follow the same “classmate” archetype that make them blend in more than they should.

Outside of local versus there’re a few distractions, like an arcade mode, score attack, survival, and time attack game types — the usual stuff, with light dialogue interactions and not much in the way of an actual “story.” Under Night‘s biggest holdup on Steam, however, has to be its online play component. It’s just…not reliable, at least during my testing sessions with it. Some matches will be silky smooth and others will lag out entirely even if both combatants have good connections. It does find people quickly though, and the community isn’t as inactive as those of other similar indie fighters.

If you have time to dig into the indie fighting scene, past the massive towering monoliths of Street Fighter and Guilty Gear, Under Night In-Birth Exe:Late should suit your needs just fine.

If you have time to dig into the indie fighting scene, Night In-Birth Exe:Late should suit your needs just fine.
REVIEW SCORE
8
File Under: Arc System Works, fighting game, Valve