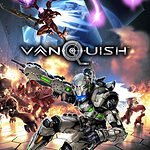 Vanquish makes every other shooter look plodding, sluggish, and pokey in comparison. Every gunfight feels like thousands are bullets are whizzing past your head. Every enemy hurries forward as you hurtle around beautiful futuristic arenas, spraying shots until your clip empties while power-sliding around each battlefield in a rocket-powered rush. Yet its mechanics make everything thoughtful, manageable, and irresistibly fun.

There is some sci-fi stuff going on with Russia microwaving San Francisco from space and creating fighting robots, but you won’t care. Even if you do, Vanquish’s plot just feels like an absurd parody of military shooters. Its story is dumb, it’s dialogue all cliché, and the voice acting is terrible, but it’s hilarious to listen to and only enhances the over-the-top nature of this game.

The story won’t have anyone coming back for more, but the battles will, as each is a frantic, fast-paced affair. They typically start out with every single enemy firing on the player at once, opening ever battle with a hailstorm of gunfire, bullets whizzing past the player and leaving glowing red lines in their wake. This visual kicks off fights with a real sense of danger, getting you fired up to fight.

You don’t have a whole lot to worry about as you watch this spectacle, as your character is armed with some handy tools. Instead of running, you can use a jet-fueled power slide that will send your character rushing across the area. This move is highly maneuverable, and you can also aim and fire your gun while doing it, showing that Platinum Games flare for ridiculous action.

You can also engage a slow-mo function, watching enemy bullets creep on by as you slide or move around. This helps you get a bead on hard-to-hit robots, and also allows you to slow things down should you find battle too hectic. This mode also engages when you take too much damage, allowing you a little time to get your bearings, move out of harm’s way, and find yourself better cover.

This system is what takes the high speed of combat and makes it manageable for its players. While you can be under fire from dozens of enemies all at once, bullets slamming into your cover as buzzsaw tanks cleave through barriers, drill-wielding robots hurtle across the field, and starships above pepper you with huge laser blasts, you can fire back at full speed, embracing the dizzying array of things all attacking you at once, or you can slow it all down when it becomes too much, taking a moment to breathe before moving back into the thick of it.

This function has limits, only going for the length of your Overheat meter. Once that drains from too much power sliding or slow-mo, players have to go without it until it fully recharges. This keeps players from abusing the function, and it has been carefully doled out to feel like just the right amount of charge to get the player to safety without making them want to use it as a crutch.

You also have a large array of guns to use in combat, from the typical machines guns and sniper rifles to guns that shoot saw-blade discs, tracking lasers, and powerful beam weapons. Not only are these weapons all fun to use with various unique properties, they can also be upgraded by picking up another copy of the weapon when your ammo is already full. The upgrades increase ammo limits, firing speeds, and other useful aspects of each gun.

Although it can be a bit irritating to avoid using a weapon to power it up, it rewards picking up multiple copies of the same weapon, and makes it more fun to scour a battlefield for leftover guns after a fight. Also, as long as a player passes a checkpoint, these upgrades stay with them for the rest of the game, even if they toss the gun away and get it later. Players can also grab special upgrade pickups, so they don’t always have to hold onto their ammo just to power up a gun.

Cool guns and fast-paced fights are great, but the set pieces take the over-the-top combat and make it truly special. You’ll face hordes of enemies while riding on a monorail, with enemy cars doing loop-the-loops around you as you try to catch them with your shots. You’ll blast machines as a huge, walking tank shoots colossal beams from afar, clearing out huge swaths of the battlefield while you scramble to get out of the way while still fighting back. It’s all beyond exciting, and makes for incredible fights that are so much more than just exchanging gunfire behind cover.

With those big beams comes a minor source of irritation – dying from unexpected things. A couple of attacks in the game will just kill you outright (melee attacks, some beams, etc), and it can be hard to know which ones will do that until you get slammed. Dying can take the player back to the beginning of some long fights and is therefore pretty annoying, but it’s something you get a feel for as you play.

The game also doesn’t really have all that much enemy variety. It uses a lot of the same enemies throughout, a couple of bosses that appear repeatedly, and that’s it. This might bore players in another game, but the speed in which these robots move, their flurries of attacks, and the variety of attacks and the ways in which they mix together make each fight entertaining even if there are only a handful of opponents.

Sometimes death feels unfair, but you won’t even think about it when you’re basically shooting killer robots while dodging a hundred shots while riding opposing rollercoasters. Vanquish is fast, yet doesn’t feel out-of-control. It’s frantic, yet precise. It gives you stunning setpiece battles in gorgeous sci-fi landscapes, and gives you high-speed tools to deal with them. It’s endlessly appealing, but it just might sour you for slower shooters afterwards.