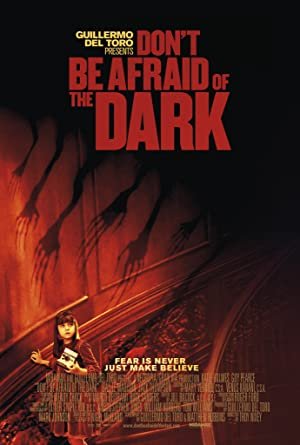 Guillermo Del Toro sure likes to terrify kids. I’m talking about the children characters in his movies, of course, though I’m sure he’s pleased that the films have that effect on young audiences as well. The Devil’s Backbone and Pan’s Labyrinth were rather amazing films about children embracing a terrifying supernatural world as a means of escaping the only moderately less-frightening world of their real lives.

They are remarkable pieces of filmmaking that turned Del Toro into a brand name in the horror community, and Don’t Be Afraid Of The Dark almost feels like a companion piece to those movies, albeit a less intellectual version more geared to jump scares than thematic complexity. This is more of a pop version of Del Toro’s dark fairy tale sensibility that might not become a genre classic like his more mature work, but could very well be his most financially successful dabble in the horror genre.

Don’t Be Afraid Of The Dark is a movie that Del Toro wanted to make for years and should have been one of his first Hollywood outings. The film is based on an obscure TV movie from the 70s that Del Toro obsessed over as a child. He was disappointed when he rewatched it as an adult because his imagination had transformed the movie into something far more frightening over the years, and he was determined to get that version made. He initially wrote the screenplay when he first got to Hollywood in the 90s, but wasn’t able to make it until now. Years on, Del Toro decided not to direct the movie himself since he had so many projects in development, Instea he stayed on as a producer to keep his dirty finger prints all over the project and gave the official directing duties to comic book artist Troy Nixey, whose gothic sensibility and bold style is perfectly suited to build a new castle in Del Toro’s sandbox.

The story is simple, but delightfully creepy. A young girl (Bailee Madison) moves into a spooky old mansion that her father (Guy Pearce) is renovating with his new girlfriend (Katie Holmes). The family recently split up, so the girl is still confused and skeptical about the new woman in her father’s life. Then one day she finds a hidden door to the basement and starts hearing voices call her name out of a boarded up fireplace. Curiosity gets the best of her and she cracks open the underground fireplace only to find that a group of pint-sized monsters emerge from the bowels of the house. They won’t show themselves to anyone else and never appear in daylight. However, the second the sun goes down the monsters start taunting the girl through creepy whispers and threaten to pull her underground with them. Her father dismisses these stories as the ranting of a troubled and medicated child, but gradually things get worse and those little guys won’t go away.

It’s all simple spook house stuff, but expertly handled by Del Toro and Nixey. Rather that splatter blood all over the screen (something that Del Toro is hardly above in movies like Blade II), the film is based more in carefully constructed suspense scenes and jump scares. From the threat established in the tooth-cracking prologue, a sense of dread hangs over every scene that filmmakers carefully build and toy with. When the monsters arrive, they are creepy and disgusting little creatures that easily live up to the build up. Saw-loving gorehounds might be disappointed by the lack of gooey stuff, but it’s not really that type of movie. As long as you know what to expect, it works perfectly well. It worked so well, in fact, that despite that the filmmakers deliberately aimed for a PG-13 rating while shooting, they were given an R not because there were moments too grotesque for children, but because it was just generally felt to be too intense. You definitely don’t hear that everyday. It’s almost a shame that kids can’t get into to Don’t Be Afraid Of The Dark, because while it’s certainly effective enough for all crowds, this sucker should almost instantly become a sleepover horror classic like Poltergeist.

Don’t be Afraid of the Dark doesn’t have the emotional depth or thematic complexity of the likes of Pan’s Labyrinth, which is probably why Del Toro didn’t direct it himself. However, that hardly means it’s a bad movie. It’s a deliberate attempt at mainstream horror scares from a genre master who knows what he’s doing. Compared to other horror fare like Insidious, it’s fantastic. Unfortunately, you can’t help compare it to Del Toro’s other work, and since he’s grown as a filmmaker since writing this script the film just isn’t quite as impressive as his best work. Still, we’re talking about a solid horror movie with big scares, strong performances, compelling characters, a rich story, and an appropriately dark n’ downbeat ending. Those elements are the makings of a damn fine horror flick, even it doesn’t quite live up to the full potential of arguably the finest contemporary horror director. It’s more than worth the price of admission if you’re one of those people who still finds their heart skipping a beat when things go bump in the night (don’t be ashamed, it happens to the best of us).

Donâ€™t Be Afraid Of The Dark is a movie that Del Toro wanted to make for years and should have been one of his first Hollywood outings.
REVIEW SCORE
6
File Under: