The 2018 holiday season is almost upon us, and we here at CGMagazine are on hand to make your shopping choices a little easier. On the comics side, 2018 has been a year full of high fantasy adventure, spooky horror escapades, emotionally engaging hijinx and vulnerable superheroics. From Vision and Green Lantern to Underwinter and Isola, here are the top gifts for the comic fan in your life.

One of the best comics of this year, Isola is a fantasy book that tells the story of a former palace guard, as she navigates a lush and at times barren world with a mysterious tiger at her side. To say any more is to invoke spoilers, but let’s just say that Isola manages to surprise and delight while astounding with its gorgeous, narrative leading art.

Isola is one of the prettiest comic books I have ever read and the colouring especially shines throughout the 136 pages that make up the book’s first volume. Also, if the person you’re looking to buy for is a fan of Avatar the Last Airbender or other similar shows then Isola is definitely the book to get. 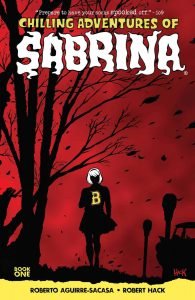 Set in the fictional town of Greendale in the 1960’s, the Chilling Adventure’s of Sabrina is a horrifyingly well-crafted take on the classic Archie Comics character. The series follows Sabrina Spellman, a half-witch half mortal who is torn between her witchly calling and her comfortable mortal life, as her monumental 16th birthday draws near.

The graphic novel is written by Robert Aguire Sacasa, the creative mind behind the hit show Riverdale as well as the Sabrina Netflix series, and the book is a great gift for fans of those series and horror aficionados alike. Be warned though, this one is not for kids. 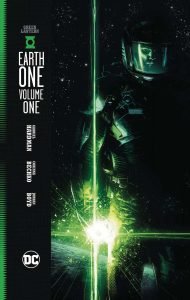 Green Lantern Earth One is a futuristic reimagining of the Green Lantern mythos that is accessible and inviting to new readers as well as veteran fans. In this new version, the Green Lanterns are less space cops and more space refugees, and the change brings with it a new sense of heart and hope. The story by Corinna Bechko and Gabriel Hardman is engaging and very feels like a grand and important superhero story. On the art side, Hardman manages to convey the main character Hal Jordan’s hardened, yet determined personality without relying on text or exposition. His worldbuilding is gorgeous and the threat that the heroes face is one that packs a real emotional weight. (Seriously, just check out the fabulous cover)

Writer Geoff Johns reignited the Green Lantern flame nearly a decade ago, and Gabriel Hardman and Corinna Bechko have once again given the property new life. This is a great gift for the superhero fan in your life, regardless of their age. 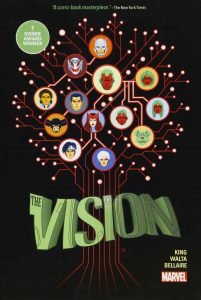 One of the best superhero tales of the past decade, The Vision by Tom King and Gabriel Hernandez Walta is a harrowing and emotionally charged tale about an android trying to understand what it means to be human. Where most superhero books are populated by maniacal villains and over-the-top action scenes, Vision stands out with its focus on relationships and the people, or in this case the android, behind the bright superheroes we know and love. Even if you’re someone who isn’t a big fan of traditional superhero stories, there is still a whole lot to love about this comic, and it serves as a reminder of how powerful the medium can be. 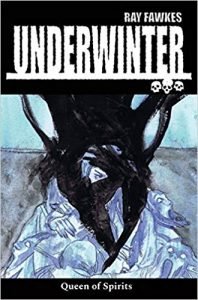 Underwinter is an uncomfortable book to read. With its heavy use of watercolours and abstract style, it’s not always clear what’s going on at first glance. It’s a Lovecraftian-style horror book that requires close inspection and multiple read-throughs by the reader. Writer an artist Ray Fawkes does such an exemplary job of crafting his world that he does what even Lovecraft couldn’t do, as he presents these undescribable creatures in a tangible and terrifying way that captivates the senses.

Queen of Spirits is the third standalone release that takes place in the Underwinter universe, and it features a fittingly spooky tale of ghosts, witches and the fight for control of the afterlife. It may not be for everyone, but for fans of eldritch horror and books that challenge the status quo, Underwinter is a must read.

Little Moments of Love is a super cute collection that is a celebration of the wonderful little moments that make up a relationship. From staying in on a Saturday night to eating a loved one’s leftovers, and everything in between. Creator Catan Chetwynd brings a strangely relatable and wholesome look at modern love, that is refreshing given the prevalence of cynism and negativity that often seeps into life.

Little Moments of Love is a great buy for that special someone in your life, and since all the comics are posted on Instagram, you can give them a look and see if they resonate with you before purchasing Instagram likes. 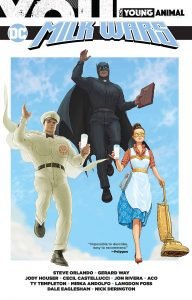 What if a priest had broken through Batman’s window instead of a Bat? What if Wonder Woman had become a housewife? What if instead of using his powers to help the oppressed, Superman instead chose to spread the gospel of…Milk? All that craziness and more is on full display in the latest crossover from the mind of former My Chemical Romance frontman Gerard Way.

Milk Wars is zany, hilarious, thought-provoking and altogether the best event series of the year. It very much feels like a modern-day Elseworlds tale and one that is even more satisfying than a tall, cool, glass of cow juice. 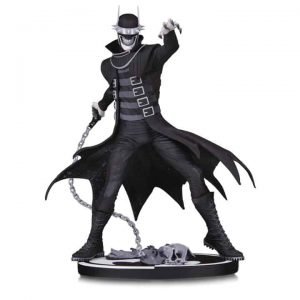 Based on the Art by Greg Capullo
Sculpted by: Jonathan Matthews
Sold by: DC Comics

Regardless of how you feel about DC Comics’ recent Metal event, it’s hard not to like the look of the series’ villainous ‘Batman Who Laughs.’. Thankfully, the rocking bad guy is no longer confined to the comics page, as DC Collectibles has decided to release a detailed statue of the character, just in time for the holiday season. The statue releases on November 29th and retails for $80.95 USD, or around $110 CDN, and is a great addition to any comic fans collection. 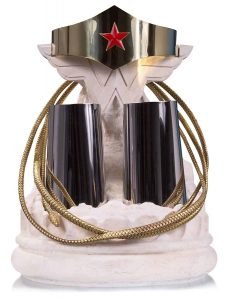 Not only is this a cool looking collectable for any Wonder Woman or DC Comics fan but it’s also currently a heck of a deal. Even though the lasso is listed at $349.99 USD on DC Comics’ official website, the package is available on amazon.ca for only $180.06 CAD. It remains to be seen how long this price mismatch will last, and I recommend pouncing on this offer with Amazon-like speed. 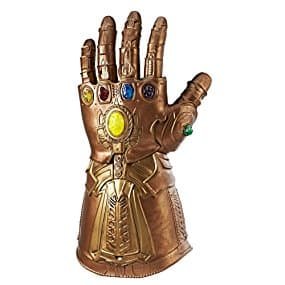 Thanos and friends dominated the box office this year in Infinity War and now you too can harness his power with the Articulated Infinity Gauntlet from Marvel Legends. The replica gauntlet features light up Infinity Stones, along with sound effects from the movie. It also looks the part and is a great buy for the Marvel fanatic in your life. Just be careful not to snap your fingers.