The Cat and the Bat Meet the Status Quo. 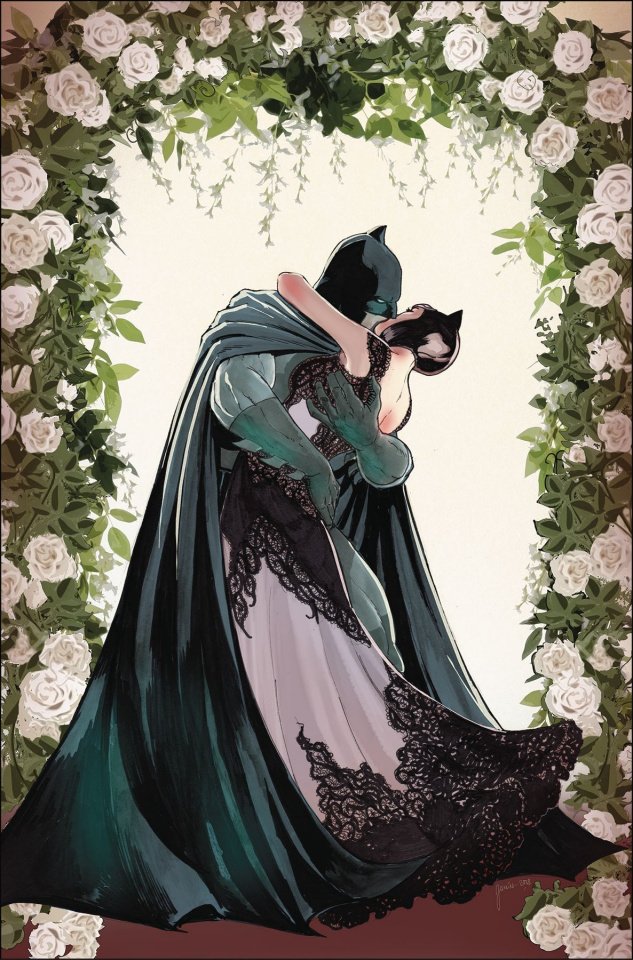 Batman #50 has generated a lot of hype over the past few months. First of all, it’s Tom King’s 50th issue of Batman which is an impressive feat in and of itself. More significantly, the issue has been billed as the big wedding day between Batman and Catwoman. But does the long-awaited issue live up to the hype? To put it plainly: no, not by a longshot.

The story kicks off rather strongly with Batman and Catwoman talking about getting married in the morning, while simultaneously defeating a comically supportive Kite-Man. From there, the two break off to make last minute arrangements for the wedding, which include finding witnesses and a minister to anoint their marriage. These tasks are interspersed with full-page spreads full of inner monologues by Batman and Catwoman, illustrated by a number of top talent in comics. These creators include: Joelle Jones, David Finch, Mikel Janin, Lee Bermejo, Frank Miller, Jose Luis Garcia Lopez, Ty Templeton, Becky Cloonan, Andy Kubert, Neal Adams, Rafael Albuquerque, Mitch Gerads and Clay Mann. Their work is gorgeous for the most part, with Lee Weeks’s minimalistic page being the standout.

That being said, the constant shifting from the main story progression to the full-page spreads does fragment the story a bit. This problem is further compounded by the fact that this issue doesn’t pick up directly from the previous issue. Batman #49 ended on a cliffhanger that featured a potentially Joker-ized Catwoman and a number of murdered civilians. To immediately switch to Catwoman and Batman all happy and healthy is a bit of a disconnect and frankly one that makes the events of this issue even more disappointing.

In case you have somehow avoided spoilers up to this point, now is the time to turn back because I’m going to have to dig pretty deep into the story from here on out.

At the end of the issue, Catwoman breaks up with Batman, leaving him waiting for her at Finger Tower where they agreed to exchange their vows. Catwoman’s explanation, communicated in a letter, cites her belief that Batman cannot exist if Bruce Wayne is happy, and as a result, she felt that it would be selfish of her to end Batman and the good that he accomplishes just because she loves him. And while that may seem like a move that makes sense, it’s also one that comes out of nowhere and very much undermines the last 20 or so issues of this comic. Since Catwoman has come into Batman’s life, he has become less of a gruff, brooding loner, and more of a three-dimensional character. He has also continued to fight crime and be a force for good, which very much goes against Catwoman’s reasoning for breaking off the marriage.

Some may argue that the move to call off the wedding is an unexpected one that plays against the expectations of the readers. However, getting rid of the Batman/Catwoman marriage serves less as a means to baulk expectations, but serves more as a return to the predictable and angst-driven Batman comics that have dominated the shelves for most of the character’s published history. While there’s nothing intrinsically wrong with that take on Batman, it is one that has been all but done to death, and a new relationship focused direction would have been a welcome change.

And it’s disappointing because Tom King has shown that he has a knack for writing Catwoman and Batman’s relationship and flipping the conventions of a Batman comic on its head. Instead of that, we get a return to predictability and the reveal at the end that Bane is plotting Batman’s demise has little to no impact as a result. In the end, Batman #50 is a disappointment and a missed opportunity that forgoes exploring a new direction in favour of the safeness of the status quo.

Liked this article and want to read more like it? Check out the Best Comics to Buy This Week and our Interview with Sonic the Hedgehog Writer Ian Flynn.

Batman #50 is a disappointment and a missed opportunity that forgoes exploring a new direction in favour of the safeness of the status quo.
REVIEW SCORE
5.5
File Under: Batman, Comics