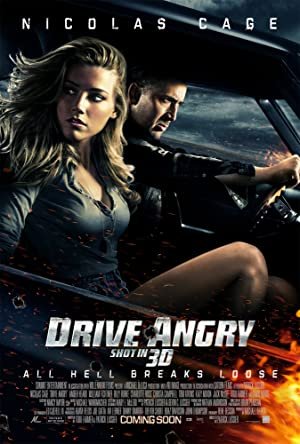 Nicholas Cage can be a frustrating actor as his taste for cinematic fast food can often undermine his talent. Sure, it would be nice to see Cage focusing more on complex character pieces like Adaptation, but the guy clearly prefers living out his 12-year-old fantasies by blowing things up real good while ogling beautiful ladies. His taste for trash and inability to accept his receding hairline makes him a laughing stock more often than not. Fortunately, Drive Angry 3D is possibly the perfect vehicle for Cage’s basest instincts. The movie is a lovingly R-rated sleazefest, boasting the bloody violence and jiggly nudity of a 1970s exploitation movie along with some delightfully tacky 3D and just enough tongue-in-cheek humor to avoid being despicable. The filmmakers and Cage clearly have no illusions about what type of movie they are making and ensure that the audience has just as much fun watching the absurdity unfold as they did making it happen.

Good ol’ Nic plays John Milton (a curiously out of place literary reference amidst the drive-in shenanigans), a spurned father who manages to escape from the clutches of hell to avenge the death of his daughter. The undead Cage is on the hunt for a sleazy satanic cult leader who plans to sacrifice his infant grandchild. Since this is an exploitation movie, Cage also picks up a hot young blonde (Amber Heard) along the way, who can spit out curses, pack a punch, and sex it up whenever the movie threatens to slow down for a millisecond. Cage is also being pursued by a bureaucrat from hell who wants to return him to the underground. Played by the underrated William Fichtner in a deadpan creepy/funny manner that feels like it may have been written for Christopher Walken, Fichtner’s character is so hilarious and unique that he threatens to steal the movie away from the perpetually mugging Cage. Fichtner’s character is a man who has been in hell so long that he’s forgotten what the real world is like and can barely contain his joy to be firing guns, admiring the female form, and driving muscle cars again.  It all sounds like ludicrous pulp and absolutely is, but sometimes we all need a Big Mac and empty calories rarely feel more satisfying they do than in Drive Angry 3D.

The film was directed by Patrick Lussier, the man responsible for thoroughly disposable My Bloody Valentine remake. The highlight of that mediocre movie was an almost indescribably bizarre sequence in which the masked slasher hunts down a naked woman and a midget. That scene suggested a hilariously tongue-in-cheek approach to sleaze that should have been more thoroughly integrated into that film. Drive Angry is fueled by this campy approach and often feels like it was made by a hyperactive teenage boy on a sugar-high gleefully raising a middle finger to guardians of good taste. A scene in which a fully clothed Cage has sex with a bubbly blond while smoking a cigar and shooting a variety of bad guys has to be seen to be believed. Backed by a talented cast who are all in on the joke, Lussier just might have established himself as a new king of blockbuster sleaze. Hopefully the film is successful enough to give Lussier a crack at turning self-conscious B-movies into a career. The guy clearly has the right combination of reverence and sarcastic dismissal of pulpy trash to create a variety of ludicrously entertaining guilty pleasures.

The bottom line on Drive Angry is that if you’ve got a soft spot for campy Nic Cage movies, this flick delivers your drug of choice. The film has more in common with the campy bad taste glee of Bad Lieutenant: Port Of Call New Orleans than it does with the embarrassing incompetence of Season Of The Witch. If all bad Nic Cage movies were this knowing, the guy might actually be respected. Hopefully the acclaim of Lieutenant made Cage realize that if he approaches overacting with irony rather than misplaced sincerity, he could be loved by the critics again. Only time will tell if he’s learned that lesson and given that he already has another bad action movie lined up for 2011 followed by three more in 2012, chances are he’s too batshit insane to tell the difference between good trash and bad trash. Ah well, at least the guy gives us a ridiculously entertaining movie like Drive Angry every now and then when he isn’t busy forging out a career as a late night talk show punchline. That’s something. It’s not much, but it’s something.

It all sounds like ludicrous pulp and absolutely is, but sometimes we all need a Big Mac and empty calories rarely feel more satisfying they do than in Drive Angry 3D.
REVIEW SCORE
5
File Under: Action