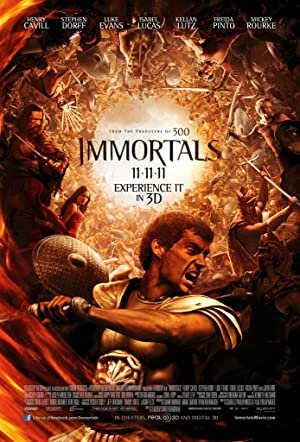 sex and violence than a weekend with Tom Sizmore on a coke binge (and to be fair, those myths weren’t exactly devoid of sex and violence to begin with). It’s the Baz Luhrmann’s Romeo + Juliet school of adapting classical work, with an MTV/videogame aesthetic to keep the attention of all the crazy ticket-buying teenagers out there. It would be a lie to pretend that the film isn’t entertaining, but it’s also rather overblown and stupid. In a way, that’s the point of director Tarsem Singh’s approach, but I can’t help but wish he’d dialed back the ADD entertainment onslaught just a little bit. There’s nothing wrong with amping up old stories for a new generation, but that requires balance, and Immortals is often too much of a good thing.

For those unfamiliar with the story of Theseus, the Coles Notes version is that he was a mortal man chosen by Zeus to stop an evil warlord. To expand it out for this edition of Theseus 2.0, that warlord is King Hyperion, played by Mickey Rourke as a man determined to take over the world by raping and pillaging, one community at a time. Well, raping and pillaging is perhaps too light a description for what he has in mind, because the guy also makes it a mandate to murder all of the pregnant women and castrate all of the men he conquers to ensure no future generations can exist who aren’t from his army. Theseus is a good ol’ muscly boy primed to be a hero, who takes down Hyperion with the aid of a couple of thieves, a priest who cut out his tongue, and a woman who can see the future because she’s a virgin (don’t worry, Theseus fucks that skill away before the big battle). Then there are the gods, who watch over it all while wearing only golden underwear and silly headdresses in an impossible garish Mount Olympus (not an exaggeration). Pretty ridiculous stuff all around and perfect fodder for a bunch of R-rated action scenes.

Based on a lever of pure spectacle, Immortals is fairly impressive. The film comes from music video director Tarsem Singh, who previously made The Cell and The Fall. If you’ve seen those movies you know that they are absolutely amazing to look at, but don’t offer much in the way of compelling characters or a coherent narrative. Immortals is about the same sort of experience. Singh creates a beautifully dirty and bloody version of Greek mythology with a series of remarkable visual set-pieces. The golden gods vs superpowered zombies climax alone is worth the price of admission, and the guy barely lets a second pass without a frame so immaculately composed and lit that it could be hung on a wall. If the movie were 10 minutes long, it would be extraordinary, and that’s probably why Singh had such success in commercials and music videos. Unfortunately. films are two hours long and pretty visuals just aren’t enough to sustain audiences for that amount of time.

The story is competently told, but offers nothing special and is boiled down to the bare essentials of dialogue and exposition to ensure that as little time passes as possible between action scenes. Things move so quickly that it’s hard to ever get invested in what’s happening. I don’t think the film would work any better if it were 2.5 hours long, but a little more attention to crafting a compelling narrative would have been nice. Where Singh really dropped the ball was with his cast. The visual filmmaker clearly cast based on the appearance of his actors, and as a result they don’t bring much to the table acting-wise. In particular, the pretty models cast as the Greek Gods might look nice in the poster art, but none of them can deliver the very formal and verbose dialogue scenes about fate and the natural order of things, making every scene featuring those characters lifeless and dull (and it certainly doesn’t help that they are dressed ridiculously while acting poorly). The only actor who delivers a decent performance is Mickey Rourke, but even he talks with a New York accent that feels wildly inappropriate for the role, and is the only actor who doesn’t go shirtless for the bulk of the running time because of a rather obvious gut that the costume designers struggled to conceal.

I guess how you’ll feel about Immortals comes down on what you expect to get out of it. If all you’re looking for are pretty pictures and ultra-violence, this could well be your favorite film of the year. However, you can’t really expect anything beyond that without inevitable disappointment. One day Tarsem Singh will get a screenplay that can live up to his incredible talents as a visual storyteller, but this isn’t it (The Cell was close, but still a little hacky in spots). Certainly Immortals offers more decapitations and loincloths than any other film currently playing in cinemas.

I suppose that’s something of an achievement and if you’re in the mood for a little shirtless bloodshed, the movie more than delivers the goods. Shame about the plot and acting, though.

One day Tarsem Singh will get a screenplay that can live up to his incredible talents as a visual storyteller, but this isnâ€™t it (The Cell was close, but still a little hacky in spots). Certainly Immortals offers more decapitations and loincloths than any other film currently playing in cinemas.
REVIEW SCORE
5
File Under: