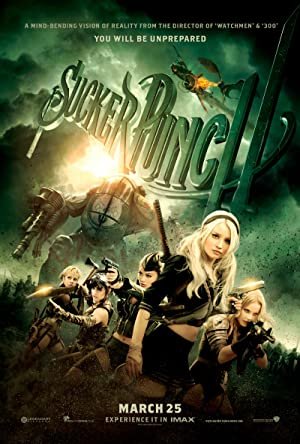 There are moments in Zack Snyder’s latest multimillion dollar pulp epic Sucker Punch that combine so many guilty pleasure elements simultaneously that it’s impossible not to at least smile. Scenes with scantily clad sexpots with stripper names fighting zombie Nazis with samurai swords and handguns certainly hold some appeal. The film combines everything from sexploitation women-in-prison movies to anime and videogames for a peak into the perpetually 14-year-old mind of Zack Snyder. In a time when most films are aimed at the teen boy demographic, he feels like an appropriate auteur for our times. Snyder not only epitomizes the trend, he also shows the limitations of it. While teen boys across the world may well jump up and down with joy in the aisles at a screening of this adolescent fantasy, everyone else seems left out in the cold. If you’re mature enough to recognize the limitations of impossibly glossy action and half-baked ideas, it’s hard not to be overwhelmed and bored by the film after a certain point. And if there’s one thing a movie like this should never do, it’s bore the audience.

The story is set up by not one, but two music video montages in the first fifteen minutes. We’re introduced to Baby Doll, a porcelain-skinned school girl male fantasy who witnesses her father attempt to rape her sister and then accidentally kills the girl while trying to intervene. Soon, she’s whisked off to an insane asylum where a lobotomy is purchased and she briefly glimpses a stage where an experimental therapist has her patients act out their delusions (the movie itself opens on this stage, the first of many painfully obviously symbols peppered throughout). With a brain numbing ice pick inches away from her face, Baby Doll drifts off into a dream world where she’s been sent to a brothel run by thinly veiled versions of the hospital staff and plans an escape with her fellow imprisoned prostitutes with ridiculous names like Sweet Pea, Rocket, and Blondie. The escape is clearly a heightened fantasy version of one attempted in the reality of the asylum and additional fantasies-within-fantasies see the girls as a super fighting force taking on samurais, dragons, ogres, zombies, and Nazis (or are they really just fighting themselves? Whoa…that’s deep, man).  It all builds to a message positioning the value of fantasy as an escape from the pain of the reality lifted from Terry Gilliam’s Brazil, but without the satire, social commentary, or even a clear understanding of what that means.

Coming into Sucker Punch, Zack Snyder has established himself as an auteur through his aesthetic like Michael Bay or Tony Scott at his pulpiest. Within seconds of seeing his rain-drenched, washed out, slow-motion imagery there’s no doubt who made the film and that does signify a certain level of talent and an understanding of the medium. Unfortunately, he doesn’t carry any reoccurring themes or ideas between movies, because he doesn’t really seem to have any. Admittedly, Snyder tries a little harder to say something with his films than say Michael Bay, but he handles the intellectual content so clumsily that I’d almost prefer it if he didn’t do it at all. He clearly has something personal to say about the power of imagination within Sucker Punch, but it’s buried beneath so many musical montages, slow-mo action sequences, and pervy close-ups of scantily clad young ladies that it’s almost impossible to work out what he’s getting at. In that respect, the film is similar to his adaptation of Watchmen, a film so close to the source material that Alan Moore’s intellectual commentary couldn’t help but carry over, yet somehow ended up getting lost behind all the $150 million spectacle that gets Snyder’s dick hard.

If there’s one thing Zack Snyder does seem to be good at, it’s carrying over the aesthetic of graphic novels into film. His trademark painstakingly crafted imagery of dark and brooding worlds feels lifted entirely from the graphic novel boom in the 80s and 90s (he’s even openly adapted a few books from that era himself with 300 and Watchmen). However, the thing that made the classics of that medium so great was the presence of talented writers behind the visually compelling artists. That gave the books more content than the average comic. Snyder’s aesthetic might benefit from better writing were it not for the fact that movie directors also have to work with actors and can’t consume themselves entirely in the visuals. The entire cast of Sucker Punch seems lost and aren’t even worth naming since they serve little purpose behind being pretty figures to occupy Snyder’s carefully composed frames. While the director is still young and has time to mature, it’s hard to imagine his tremendous financial success in the industry will convince him that he needs to grow as an artist in the money-hungry hills of La-la-land.

With all those criticisms and reservations in mind (and there are more that could be heaped onto the fire), it can’t be said that Sucker Punch is a total washout. It might be vapid, indulgent, and overly stylized, but those are the qualities that define most B-movies. Anyone who claims they didn’t find a moment of entertainment (even of the unintentionally campy variety) in all the boobs n’ guns action would have to be lying. The style and world of the film does tap directly into the wet dreams of teenage boys who also might find the mock-profound statements about imagination Snyder attempts intriguing. Given that is the key demographic for the film and Hollywood in general these days, it will probably be a success with legit and regressed adolescents searching for a movie boner. So, on a certain level the film has to be considered a success, if only for its fleeting moments of B-movie bliss. However, there were sarcastic snickers throughout the audience during the screening I attended and I’d imagine that will happen every time it’s shown. Until he grows up, a combination squealing teens and snickering adults is the best audience reaction that Zack Snyder can hope for.

Until he grows up, a combination squealing teens and snickering adults is the best audience reaction that Zack Snyder can hope for.
REVIEW SCORE
5
File Under: Sucker Punch