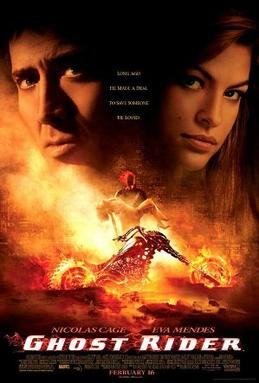 The phrase comic book geek is thrown around a lot, but little do people realize that there are several degrees of geekdom. On the one hand, there are the everyday people that make a weekly trip to the comic book store for their favourite books. Then, there are the guys that dress up like their favourite characters while at the conventions, and then there are the fans that name their kids after Superman—fans like Nicolas Cage. Cage has been itchin’ to be a comic book hero since Warner put the kibosh on his chance to play the Man of Steel back in ’98, and now he’s got his chance with Ghost Rider.

Based on the Marvel comic, Ghost Rider is about a motorcycle stuntman named Johnny Blaze (Cage) that makes a deal with the Devil (Peter Fonda) to save the life of his father in exchange for his soul. Johnny’s part of the deal is to fulfill the role of the Devil’s mounted bounty hunter; when night falls, his skin burns away and his skull becomes engulfed in flames as he rides an enchanted chopper through the streets looking for his quarry. This time out, Ghost Rider is tasked to find Blackheart (Wes Bentley), the son of the Devil, searching for some mystical contract that will give him leverage over the “old man” to be ruler of Hell. Of course, Johnny ends up defying his boss and takes up the role of the Spirit of Vengeance with all the privileges and responsibilities that the job comes with.

Writer/director Mark Steven Johnson was also behind Marvel adaptation Daredevil, which is regarded in a divided manner by the fan community. However, I can’t say that Ghost Rider will be viewed with the same consideration years from now because I think a lot of people will say that it stumbles and falls for the most part. It’s a confused mix of comic book daring-do, horror monster show and vanity project, and it doesn’t do a single one of these things very well.

Cage manages to hold it together for like 40 minutes before he begins his patented mugging and stuttering, the charm of which was lost about the same time he did Gone in 60 Seconds. Eva Mendes plays Johnny’s former flame (Boo ya! Fire pun), and she’s not given anything terribly interesting to do and that includes the usual superhero girlfriend rake out about the hero’s secret keeping and day saving. As a bad guy, Wes Bentley did better as pot dealing, suburban Tarantino in American Beauty. Gone is the legitimate threat of Blackheart from the comic and in is a pestilent, pretty boy that acts like he’s getting back at dad for not buying him that Porsche for his sweet 16, instead of being a future ruler of Hell.

The only two guys that seem to know what movie they’re in are Peter Fonda and Sam Elliott. As a graveyard caretaker that loads Blaze up with the Ghost Rider info, Elliott gives the proceedings just the right sort of gravitas and captures the leathery feel of the Old West that Johnson sometimes tries to go for. As the big D, Fonda plays it just right, not too campy but not wholly serious either. And the cleverness of having the Easy Rider play pit boss to a motorcycle-riding demon is about the only source of inspiration the film really has.

The special effects are just okay, which is a little surprising. Disappointing is another word given the occasional and obvious fakeness of the rendered Rider. How is it we’re able to completely buy Gollum or Kong or the fish Pirates from Dead Man’s Chest, but a Hell’s Angel with a burning skull presents significant difficulties that not even software can solve. Not helping matters though is the lameness of the action scenes, it’s pretty much the same fight scene done four times. The rules of the Rider are never really given a fair hearing, we never know what he’s truly capable of, and Johnny seems able to master his powers with about two minutes of hard thinking. Even Harry Potter had to go to magic school for seven years.

If Johnson’s managed to succeed at anything, it’s that he’s not topped the Marvel movie record of horridness matched by rubber ears on Captain America. Instead, with Ghost Rider what we get is something more in line with a Fantastic Four level of mediocrity where some stuff is done right and too bad about the rest. I can only imagine now that actor Donal Logue, after having roles in both this and the first Blade, is hoping for either a Morbius or Darkhold Redeemers movie so that he can be in all the Midnight Sons properties. Maybe next time, it won’t feel like a two-hour penance stare.

With Ghost Rider we get is something more inline with a Fantastic Four level of mediocrity where some stuff is done right and too bad about the rest.
REVIEW SCORE
4
File Under: