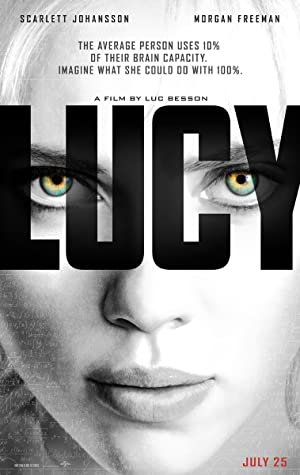 Over the last 30 years Luc Besson has turned himself into a one man Eurotrash action movie factory. He started by writing and directing cult hits like La Femme Nikita, Leon: The Professional, and The Fifth Element before going on to supervise a decade’s worth of glorious B-movie bliss as writer/producer for District B13, The Transporter, and Taken. He still writes and directs occasionally, but for the last ten years those efforts have felt peripheral as his focus has been on his production company. Then along came Lucy. Besson’s latest feature is absolutely insane and completely stupid in a way that might actually be brilliant. It feels like a spiritual sequel to The Fifth Element by way of The Matrix and 2001: A Space Odyssey. He’s tried to take one of his typical vengeful heroine action flicks and turn it into a philosophical thesis on life, the universe, and everything. To say that he doesn’t succeed in his philosophical ambitions is an understatement, but that’s almost not the point. Lucy is a big ol’ crazy movie that is never less than insane and almost more entertaining when it fails in its ambitions than when it succeeds. You’ve never quite seen a movie like this even though you’ve kind of seen it all before. It simply has to be experienced, even if it can never be fully comprehended.

The film opens with a shot of a developing caveman much like 2001 (no, I’m not kidding). From there, we cut to Scarlett Johansson as a full time party-girl and part time student in Taiwan, whose sleazy boyfriend convinces her to deliver a briefcase to a gangster while Besson intercuts footage of a cheetah stalking a gazelle and a mouse approaching a mousetrap. Why? Symbolism! What’s the point? Who cares?! From there Johansson is thrown into a room with Oldboy himself, Min-sik Choi as a stoically psychotic gangster who surgically shoves an experimental new drug into her belly for smuggling. Unfortunately, that drug starts leaking into her bloodstream and unlocks the 90% of the human brain that goes unused unless you are Limitless. This is explained to the audience through the soothing tones of Morgan Freeman, who almost makes it sounds like real science. Freeman’s lecture is backed up by more stock footage montages that feel like Baraka for dummies. Why? Just because. When Scarlett wakes up, she’s suddenly super smart and a superhero. She sets out for revenge while also attempting to evolve to a higher state of consciousness and share her gifts with Morgan Freeman. She starts manipulating reality, moving around radio waves, and beating up bad guys with psychic skills. Why? I’ve got a feeling that even Luc Besson couldn’t tell you.

Lucy is an action film that wants to be profound, but in truth it’s deeply stupid. For one thing, the 10% brain theory is hokum. For another, lines like “The infinite components of the cell’s nucleus are exploding inside my brain,” never sound intelligent when spoken out loud, especially in the middle of a shootout with a bazooka. It’s likely that many people will hate this movie and/or find it confusing. However, those people are a little sad and need to have some fun. What Luc Besson has created is an absolutely bonkers pseudo-intellectual action movie that never ceases to be entertaining for all the right reasons and all the wrong ones as well. On the “right” side, Besson directs with a renegade sense of pacing filled with ridiculous car chases, ludicrous psychic action, and a pounding techno soundtrack that forces his audience into a breathless sugar high. The director plays the whole movie at eleven and it’s hard not to be numbed into submission by his sensory overload. He also cast the flick quite well, with Johansson’s sultry tones spitting out brain-dead philosophy with impressive gusto and her curves kicking ass left and right. Her commitment is admirable and her attempts at thoughtful glances almost sell the dumb ideas at the center.  Ditto Morgan Freeman, whose natural gift for credibly spitting out exposition is given its toughest task to date, but he delivers. Even Min-sik Choi’s underwritten gangster feels like a genuinely imposing villain simply because the right guy is playing him.

In the last 20 minutes Besson tries to transform his movie from The Fifth Element 2 into 2001 and fails so spectacularly that it’s just as entertaining as if he had succeeded (just wait until you see the McGuffin that Morgan Freeman receives in the final scene and try to contain your laughter, I dare you). He piles on faux profound imagery with relentless abandon and even though it’s impossible to deliver on his philosophical promises in a movie that also features Scarlett Johansson flinging bad guys around the room with her mind, it’s fun to watch Besson try. The fact that Lucy doesn’t make sense overall and fails to live up to its ambitions is beyond the point. It’s a goofy thrill ride that gets a magically dumb ending rather than the conventionally dumb endings that we’re used to in this genre. That’s enough to make the movie kind of special. Lucy feels like the type of film that will develop a cult following amongst people who like to laugh hysterically at movies that fly so far off the rails that they carve their own path. Or at least it deserves to be received that way. Love or hate Lucy, you kind of have to see it just to acknowledge that something this unapologetically nuts actually got made and a prime summer movie release.

He still writes and directs occasionally, but for the last ten years those efforts have felt peripheral as his focus has been on his production company. Then along came Lucy.
REVIEW SCORE
7
File Under: Action, Film, Scarlett Johansson, Science fiction