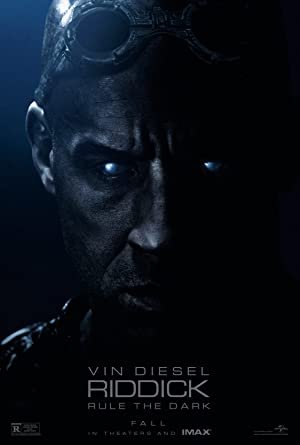 Remember when Riddick was supposed to be the future of dark science fiction cinema? Back when Pitch Black came out it seemed like the charming psychopath who sees in the dark was a future genre icon in the making, and its star Vin Diesel was one of the most exciting actors of his generation. In time, both of those predictions have proven to be wildly incorrect. You can blame it all on The Chronicles Of Riddick, a beautiful but boneheaded attempt to give the character a sci-fi epic franchise that was so bad, the tie-in video game actually ended up being superior. Yet despite that unfortunate failure, somehow the character has returned. Simply titled Riddick, this is one of those threequels that attempt to apologize to fans by pretending the first sequel didn’t exist and going back to basics. Surprisingly, it kind of works. Somehow director David Twohy and Vin Diesel have found life left in their bald, cue ball antihero and delivered something that might not be as good as Pitch Black, but at least suggests that producing further Riddick sequels wouldn’t be a terrible mistake. Who could have seen that coming?

After tossing off/abandoning all of the needlessly convoluted backstory from Chronicles in a few flashbacks, Twohy kicks off his film by abandoning Riddick on a desert planet. For almost 30 minutes, the film follows Vin Diesel alone and struggling to survive, which is much more entertaining than it sounds. Riddick learns to fight the giant scorpion monsters that inhabit the hostile land, feasts off their gooey innards, and makes friends with a big CGI dog (because, why not?). Eventually, he decides to leave the planet by alerting nearby bounty hunters (and huntresses) to his presence through a distress beacon. Two competing teams of bounty hunters show up to hunt Riddick down, only he ends up bumping them off one by one instead (because he’s Riddick). Then after teasing audiences with what they loved about Pitch Black, the film turns into a straight up remake where Riddick and his foes must form a reluctant partnership to fight off a legion of alien monster thingies.

So, Riddick is essentially three sequels for the price of one, which is both a good and a bad thing. Any one of these ideas might seem tiresome stretched out to feature length, but play like gangbusters condensed down to 30-40 minutes. The only trouble there is that the film feels a bit too long for a schlocky B-movie and probably could have benefited from ditching one of the three sub-narratives. On the plus side the movie never really drags, it
just feels lengthy when the collective running times add up. David Twohy has quietly become one of the most underrated B-movie directors in Hollywood (if you’ve never seen his 2009 thriller A Perfect Getaway, you really should do so immediately). He’s a gifted technician and smart enough to know when to follow or bend conventions to deliver a satisfying genre flick. Riddick is not his finest hour, but it is a smooth running entertainment  machine that rights all the wrongs of Chronicles and delivers the most creative use of a machete in recent memory. That’s about all you need to get by in this genre, and the acting is decent all around as well. Vin Diesel proves why he became a star by fully committing to his solo section and delivering enough charisma to carry it. He’s an actor with limited chops, but the role demands exactly what he can deliver. The same is true of the rest of the low-key cast. No one will win awards, but everyone is cast to type well enough to deliver their character as required, particularly Battlestar Galactica’s Katee Sackhoff as a hard as nails lesbian assassin (there aren’t enough of those in movies these days).

Riddick is straight up nuts n’ bolts genre filmmaking. From Twohy on down, everyone involved knew what movie they were making and delivered it without frills. Sure, some of the CGI reveals the franchise’s dwindling budget and things drag on about 20 minutes too long, but in the end if you have any desire to see a movie called Riddick, you’ll get what you crave. It’s enough to suggest that there might still be some life left in the character. Vin, Twohy, and co. will never make a masterpiece out of this material and already learned to keep their ambitions in check after failing on the first sequel. However, a series of movies in which Riddick bounces around the galaxy and beats up bad guys worse than him has a certain sci-fi spaghetti western appeal that could be worth tapping into. Regardless, for the first time since the year 2000 it’s actually worth musing about potential Riddick sequels. That’s really all this movie could hope to accomplish and it’s kind of amazing to think that a franchise deemed dead almost ten years ago somehow came back. Well played gents, but don’t get greedy again if it’s a hit.

“This is one of those threequels that attempt to apologize to fans by pretending the first sequel didn’t exist and going back to basics and surprisingly, it kind of works.”
REVIEW SCORE
6
File Under: Vin Diesel