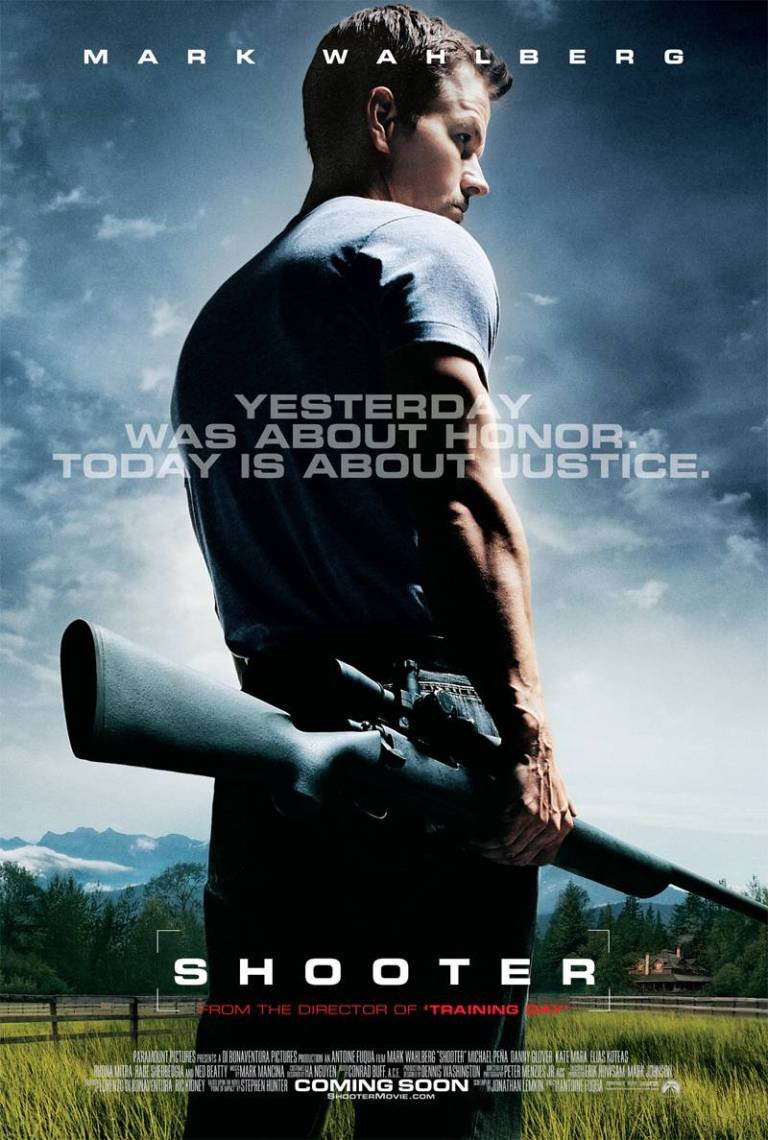 This new thriller from Training Day director Antoine Fuqua is a confection of two vastly different genres: the Bruckheimer blow ‘em up and the 70s conspiracy thriller. The movie can easily be divided into three different sections, all easy to recognize.

First there’s the recruiting of the maverick. This is the part of the film where the hero, a lone wolf kind of figure, perhaps once betrayed by his superiors, is sought out for help in a situation that requires his specialized knowledge. In Shooter, we’re talking about the improbably named Bob Lee Swagger (Mark Wahlberg), a former Marine sniper left behind enemy lines with his spotter who was subsequently killed. There’s a natural indemnity in Swagger as he now lives in seclusion in a Wyoming mountain cabin where he compiles conspiracy theories on the web. Still, he’s a patriot at heart. So when a Colonel Johnson (Danny Glover) approaches him about using his experience to help catch a potential presidential assassin, Swagger answers the call of duty once more.

Next, there’s the fugitive, middle stage of the plot. Naturally, the whole thing is a set-up and Swagger is the patsy. The target is not actually the President, but a visiting Cardinal from Africa, there to speak out about alleged war crimes perpetrated by the US in his country. Ever nimble, Swagger escapes with two bullets in him and manages to evade a four alarm manhunt to cross state lines and get to the home of Sarah (Kate Mara), his dead spotter’s widow and former student nurse. Despite reservations, she stitches him up and he’s ready to fight back.

This brings us to the final stage, and, as if you didn’t already know, it’s revengin’ time. Swagger needs a powerful ally, but all he gets is rookie FBI agent Nock Memphis (also improbably named, but played by Michael Pena from World Trade Center). Swagger knows that Johnson was a plant, but who does he work for and who was the shooter that took the fatal shot at the Cardinal? All roads lead to red meat-eating, big game-hunting Montana senator Meachum (Ned “Misstah Lootor” Beatty). He’s the man you love to hate, but gets re-elected anyway probably because the other guy was once seen in the same photo with someone who might have been at either a gay wedding or a flag burning.

“All in all, I have to say that I was entertained by Shooter indeed.”

There’s confusion in the way the movie is plotted. In its mind, Shooter is a post-9/11 cynical mind-bend like The French Connection. The evil senator opines about how there’s really no such thing as Sunnis and Shiites or Republicans and Democrats, there’s only haves and have-nots, and he’s a have-baby, through and through. “Whatcha gonna do? Shoot a sitting senator in the head? I’d like to see you try.” Based on Stephen Hunter’s book Point of Impact, the script reinforces this conundrum and poses the moral and ethical quandaries associated with what to do when the nature of a system protects the very people it’s supposed to protect the people against.

Unfortunately, though, this film is more of the action movie persuasion, which leaves little room to explore the moral ambiguities fully. A lot of the third act is filled with the typical macho action stuff that Hunter probably rails against in his day job writing movie reviews. The roles for women are non-existent unless you count being the victim or the supportive secretary as a sizeable and appropriate contribution for the modern, more action-acclimated woman. Beatty’s obsurdly evil, and Glover gives appropriate chill as the Colonel, but Canadian Elias Koteas is the resident, over-the-top ham as one of Johnson’s flunkies.

All in all, I have to say that I was entertained by Shooter indeed. Wahlberg knows how to play the game and can channel his inner street tough to make a believable and capable action hero. After all, Swagger can launch a one man war on the US government with a simple trip to buy supplies at the local Wal-Mart. He can make his own pipe bombs and napalm (clearly he owns a copy of the Anarchist’s Cookbook), and can bring down entire choppers with one well placed shot. And despite the cursory silliness, Shooter does a decent job of demonstrating the considerations that go into precision firing a gun beyond point and shoot. Despite the logical flaw in the ending, the movie does well by the violence loving audience member as the bad guys get their comeuppance and the good guys are allowed to drive into the sun. Make that swagger actually, swagger on into the sequel that is.

Despite the cursory silliness, Shooter does a decent job of demonstrating the considerations that go into precision firing a gun beyond point and shoot.
REVIEW SCORE
7
File Under: Shooter