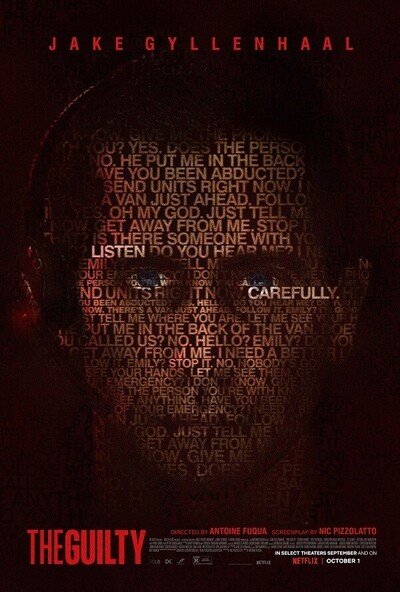 Antoine Fuqua has a killer track record of making thrillers that question heroism, policing, and authority. Though not his first feature, he is most notorious for launching himself into notoriety with Training Day, the story of a new cop’s disastrous first day alongside a crooked counterpart. For his latest, he’s adapted a popular Danish film about a 911 operator whose hero complex has him push some ethical boundaries.

Joe (Jake Gyllenhaal) is an LAPD officer marooned to a desk. He has been pulled of the streets for an unknown reason and spends the evening looking like he’s about to burst through his workstation. Otherwise bored with the gig, he gets a call from Emily (Riley Keough), a woman who says she’s been abducted and needs help. This call is different for Joe than the others, he senses her fear and wants to save her. With only the limited weaponry of a keypad and a headset, Joe spends the night putting together the pieces of this abduction story hoping to save Emily and her family and remind himself that he’s the good guy. As the invisible clock rapidly ticks, Joe tries to breach every protocol and blast through every barrier, making both he and the audience question whether being a “good cop” is the right way to protect and serve.

“The Guilty is a white-knuckle thrill ride that reveals its secrets in just enough time to keep you breathless.”

The Guilty is a white-knuckle thrill ride that reveals its secrets in just enough time to keep you breathless. It’s frustrating to watch a tense Joe clutch his face and only have a keyboard at the end of his itchy trigger fingers. It uses the single-location bit to killer effect, and it’s the heavyweight performance of Gyllenhaal that keeps it all together. In all his roles, Gyllenhaal does such subtle work with his eyes, creating specific traits for various characters. This is no different, him beaming pain, sadness, and anger from his peepers, allowing his subtle reactions to do the work of giving us enough by being the only thing on screen. The audience is left alone with Joe and his headset, the action all happening off-screen, so the effectiveness relies on his intimate performance and the voice work of Riley Keough, Ethan Hawke, and Peter Sarsgaard. Fuqua, and presumably the Danish film, evoke the tension of movies like Buried and Oxygen, where there’s a sense of time quickly evaporating that will make you tap your feet and want to screech like Joe does at characters who lack a sense of urgency.

But for all the success in the story and its twists and turns, the takeaways elicit some lip curls and brow furrows. It’s clear Joe did something nasty to get him handcuffed to desk duty, and as we are pulled into his frustration, the movie almost convinces us that his breaches of protocol were appropriate. I think these core concepts will result in a water-cooler conversation or two over what it all means. From here, I don’t think the few rude outbursts were the movie doing enough to make me question whether or not Joe is the good guy. Ultimately, it’s ethically vague, which is usually a snack that film fans would otherwise gobble up, but it’s a bit uncomfortable for a 2021 film release to glide a bit too close to a police officer’s redemption story.  Further, the movie indicts how ill-equipped first responders are in mental health crises, but comes a hair too close to undermining its own point.

Uncomfortable takeaways aside, it’s safe to say The Guilty will keep you considering it long after the credits roll. It’s tight ninety-minutes hit the sweet spot that allows it to keep you at the edge of your seat just long enough before it becomes uncomfortable. It’s palpable that Gyllenhaal and Fuqua probably had a lot of fun with this masterclass in acting and directing, trying to obliterate the challenge of making an action movie that shows no action at all.

The Guilty is a white-knuckle thrill ride that reveals its secrets in just enough time to keep you breathless. But it doesn’t do enough to make you wonder about its hero-complex white knight lead.
REVIEW SCORE
7
File Under: TIFF 2021