A Deep Journey into Self-Doubt 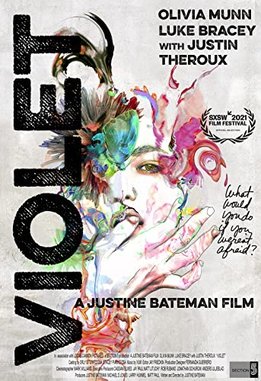 Walking into Violet—the new film from Justine Bateman—I did not know what to expect. From everything I had read about the film before it’s TIFF 2021 premiere, I was sure I was in for a ride, but I did not know just how much of one. Despite some gripes, Olivia Munn and everyone who worked on Violet deliver a shockingly difficult and brutally honest take on self-doubt, anxiety and inner struggle that needs to be experienced.

Violet (Olivia Munn) works in Hollywood and faces the constant struggle of finding herself. Every choice is a battle to say what she wants and needs; with the expectation she will fail. Her inner voice (Justin Theroux) has become all encompassing, pushing her to give up what she wants to be who she is expected to be. She is doing well, her life is on the right track, and people in her life love and respect her, yet she cannot accept any of this could be true. It is not until she is pushed that she starts to realize how much she is missing and how much she still wants.

“While a simple premise, one we can all relate to, it works wonderfully to paint a picture of a person who is trapped in a prison of her own anxiety and fear.”

While a simple premise, one we can all relate to, it works wonderfully to paint a picture of a person who is trapped in a prison of her own anxiety and fear. Justine Bateman does a wonderful job giving a taste of both sides of her mind, with the wants and desires represented by writing on the screen, and doubts shown through the male voice, constantly telling her she will fail.

Olivia Munn blankets herself in the role, becoming the character of Violet. Her pain and struggle is brought to life in every scene with the subtle movements, inflections and way Munn carries herself. It is visible early on how much she is struggling to be herself. The words that come out of her mouth are often the complete opposite of what she truly wants to say. As the film progresses, the struggle becomes more obvious, and Munn’s performance makes the change visible, painful, and rewarding.

“Despite this shortcoming, Violet is a in depth look at the struggles we all face”

While I love the concept, the story and dialog work very much as a vehicle for the message. It is a hard watch, and one that feels more like a series of scenes than one cohesive story. Each moment, a segment of Violet’s life, all the struggles, pain and wants, brought to life on screen—raw and unedited. While this works, the dialog feels stifled or forced at times, takes away the realism that works so well. It brings needless difficulty to a film that so brilliantly captures the struggle many people reading (and writing this) will face daily.

Despite this shortcoming, Violet is an in-depth look at the struggles we all deal with, giving a face—and voice—to the self-doubt, anxiety, and self-loathing that many people struggle with. It is a powerful film, and one that will sit with you long after it ends.

While I would have loved to see the story woven into the concept a bit better, Justine Bateman delivered with the film, and it stands as a knockout achievement for Olivia Munn. If you are at TIFF 2021, or have the chance to give Violet a shot, dive in, but be prepared to have it get under your skin.