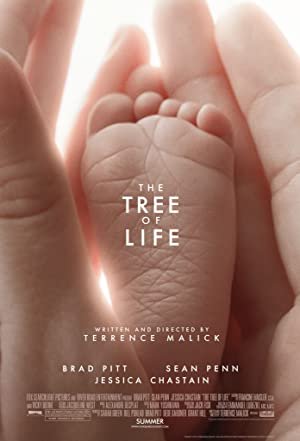 In the midst of the summer blockbuster season along comes Terrence Malick’s Tree Of Life, an art film palate cleanser of sorts that might feature CGI dinosaurs, but is about as far away from special effects driven entertainment as humanly possibly.  The movie comes from one of cinema’s greatest enigmas and recluses, Terrence Malick. The director of Badlands, Days Of Heaven, and The Thin Red Line averages about one movie per decade and seems to work in a genre all his own. His movies play almost like a series of fever dreams and memories. A collection of stunning images that don’t always offer much in the way of plot, but provide a beautiful and almost hypnotic atmosphere. Tree Of Life is a project that the director has been developing on and off since the 70s and in the way it almost feels like the ultimate Terrence Malick movie. A film of this ambition and scale probably hasn’t been seen from an American director since Stanley Kubrick’s 2001: A Space Odyssey. The subject is the struggle to determine the meaning of life. It sounds pretentious and it is, but it’s also an awe-inspiring cinematic experience that justifiably won the top honors at this year’s Cannes Film Festival and should be appreciated by everyone, not just mouth-breathing film geeks.

The movie opens with Sean Penn discovering the death of a family member, which instantly sends him spiraling into crisis. The frenetic opening scenes mimic the character’s lost and disassociated mindset. We see snippets of his day interrupted by haunted memories and images of the formation of the universe, from the big bang right up until dinosaurs walked the earth. Eventually the movie settles into a single long vivid memory that feels ripped from Malick’s personal history and is the closest thing the film offers to a cohesive plot. We see the early years of the Sean Penn’s character’s childhood in 50s Texas, examining his relationship with his idealized angelic mother (Jessica Chastain) and his troubled abusive father (Brad Pitt). It’s a story of the character’s loss of innocence, when he moved on from the naïve and simple world of childhood into the troubled and confused world of adolescence and adulthood. The film eventually finds it’s way to into an almost surrealistic final passage in which an adult Sean Penn finds peace in some form of spiritualism that’s thankfully free of association with any specific religion. That might sound like a spoiler, but this isn’t really the type of movie that can be spoiled by knowing what events will occur. It’s not really about that.

Essentially Tree Of Life could have been called Existential Crisis: The Movie. That might not sound like an appealing movie-going choice to accompany mouthfuls of buttery popcorn, but it’s a truly moving experience with an almost hypnotic quality. It might not offer wiz-bang boom boom style entertainment, but it’s impossible to tear your eyes from the screen nonetheless. Malick is above all else a visual master and along with cinematographer Emmanuel Lubezki (Children Of Men, Sleepy Hollow) he created easily the most beautiful film to come along in years. His camera flows through scenes, creating intense momentum and emotion even when little is happening. Extreme close-ups highlight small details of scenes that might not be required by the narrative, but vividly recreate subjective memory. Looking back on important life events like the ones Malick creates in Tree Of Life, we don’t necessarily remember a clear and complete picture. Memories come to us in snippets, details, thoughts, and emotions embellished and altered by time. Malick captures that quality of memory beautifully.

The sequences depicting the creation of the universe offer some of the best special effects of the summer bar none. Malick has been experimenting and developing techniques for these sequences with SFX guru Douglas Trumbull (2001, Blade Runner) for years and Trumbull actually came out of retirement to help Malick finally bring the movie to the screen. Images of the big bang, atoms forming, evolution, and of course dinosaurs are created through an invisible mixture of new-fangled CGI and the old fashioned optical photographic effects that made Trumbull a legend in the special effects industry. The sequences are remarkable and vital to the film, but it has to be said that their place in the movie has been exaggerated in the advanced publicity. The special effects sequences only make up about 15-20 minutes of the final 2.5 hour product. However, the impact of those sequences is far reaching both visually and thematically.

On the acting side of things, Malick gets his usual stellar work from his cast. Sean Penn is at his brooding and wounded best. Jessica Chastain is heartbreaking in the role of an impossibly innocent and pure mother under the thumb of an abusive husband. Brad Pitt plays the husband and presumably his name is what locked the film’s funding into place. He’s perfectly fine in the role, but it’s undeniably distracting that the biggest movie star on the planet is trying to play a simple, broken man and it certainly doesn’t help that Pitt now seems to think the key to playing character roles is to stick out his bottom lip as far as possible a la Inglourious Basterds. Again, he plays the part well, but it could have been an ever more memorable character with a weathered Nick Nolte-style character actor in the role. The real standouts performance-wise are the cast of children that Malick assembled. Most of them had little acting experience and he must have let them bring a great deal to their roles because they feel remarkably natural, often playing long emotional sequences without dialogue. As in any Malick movie the acting is strong and the characters are memorable, but it’s ultimately a director’s picture and Malick steals the show.

It’s hard to say whether or not Malick actually fulfills his grand existential ambitious with Tree Of Life, simply because I don’t think any movie could fully answer the questions he raises. Still, it’s an incredibly moving and aesthetically stunning experience to watch him try and already a frontrunner for the best film of 2011. The representations of the formation of life and the angelic mother/demonic father divide might sound a little naïve and simplistic, but it works. Malick has always seemed a little naïve as a filmmaker and in a way that’s appropriate. He works in archetypes, not real people. Some might be frustrated by that, but given all of the lofty ideas at play in the movie, it’s actually not a bad thing to have fairly simple character dynamics to latch onto at the center. Tree Of Life will inevitably thrill and frustrate viewers in equal measure, but should still be seen by everyone with even a passing interest in the material. The movie has a grand vision that makes the summer blockbusters playing opposite it feel like amateur youtube videos. Even if the film doesn’t always reach the transcendence it strives for, the fact that Malick even tried puts The Tree Of Life in a league of it’s own this summer. A film that demands to be seen by anyone with even a passing interest in the art of cinema.

Itâ€™s hard to say whether or not Malick actually fulfills his grand existential ambitious with Tree Of Life, simply because I donâ€™t think any movie could fully answer the questions he raises.
REVIEW SCORE
6
File Under: