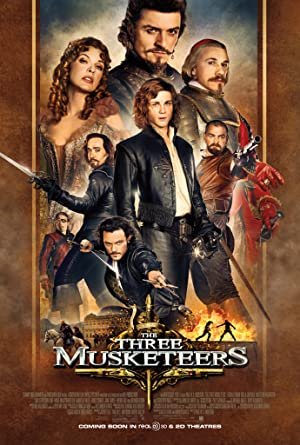 Paul W.S. Anderson’s Three Musketeers is an absolutely ludicrous Hollywood bastardization of Alexandre Dumas’ beloved novel. The film transforms a historical romp into a ridiculous spectacle filled with flying battleships and Matrix-style slow-motion fight scenes. Here’s the thing, though: what I just described is the best part of the film, as well as its most disastrous element.

You see, there’s a winking sense of ironic humor in the film which suggests that, for once, Anderson actually recognizes that he’s made absurd fluff and has created a semi-parody of blockbusters. The thing is that it’s unclear how much of the cast and crew have been let in on the joke. If the film is a deliberate comedy, it works, but it’s hard to tell how sincere everyone involved was when they approached the project. As a result, the film feels muddled, a half-parody of blockbuster trash and half-pure blockbuster trash.

The movie opens with a fairly loose adaptation of the book, with D’Artagnan coming to Paris to join The Musketeers as an innocent country boy, and inadvertently annoying and scheduling duels with all of the surviving Musketeers before lunch. Wait, I should double back: the movie actually opens with a ridiculous prologue in which the Musketeers and the deceitful Milady break into a secret chamber of Leonardo Da Vinci’s vault in Venice (which obviously has Indiana Jones-style booby traps) to steal his long lost plan of a flying battleship, destroying a priceless collection of lost Da Vinci inventions in the process. The dichotomy of those two sequences sums up the approach to the film as a whole. The movie loosely follows Dumas’ original plot of the retired Musketeers coming together to stop an international scandal connived by Milady and an evil cardinal, by stealing back some of the queen of France’s jewels in time for an important party with the king. Only this time it involves far more pyrotechnics and the aforementioned flying battleships.

The main player who gives away Anderson’s possible deadpan joke is his wife Milla Jovovich as Milady. She sports a mischievous grin during her more ridiculous sequences (like when she strips down to her old-timey underoos for a jewel heist) that suggests that the movie is deliberately over-the-top. The same can be said for Bond villain/Pusher Trilogy veteran Mads Mikkelsen and Inglourious Basterds Oscar-winner Christoph Waltz. The three actors make up the film’s primarily villains, and they are clearly laughing their way through the absurd screenplay. Their scenes are funny and exciting with their respective tongues stuck deep into their cheeks; unfortunately, the musketeers themselves take their scenes very seriously, playing the roles as if the film is a legitimate Musketeers adaptation, which can elicit some rather loud unintentional laughter when they apply that approach to scenes involving flying ship battles over international waters.

Make no mistake, Paul WS Anderson’s The Three Musketeers is a stupid, stupid action movie from a director who specializes in them (Mortal Kombat, Resident Evil, etc.). If you enjoy dumb action movies, there are plenty of absurd sequences to laugh at and expensive explosions to admire. The winking humor in certain scenes may suggest it’s all a big expensive joke, but the cornball dialogue between the musketeers feels more like it come out of Anderson’s bad movie handbook. It’s a curious combination, but bad movie lovers who find as much joy in laughing at movies as they do laughing with them should have a good time. I can’t in good conscience recommend the movie to anyone expecting a straightforward and elegant Three Musketeers movie. If you’re looking for that, rent Richard Lester’s (A Hard Days Night) brilliant 70s adaptation. However, if you’re in the mood for a future Razzie awards contender that will have you doubled over in hysterics at ludicrous Hollywood filmmaking at it’s best/worst, there’s definitely plenty about the movie to enjoy.

Just don’t go in expecting a good movie. Good lord, would that ever be a mistake.

If youâ€™re looking for that, rent Richard Lesterâ€™s (A Hard Days Night) brilliant 70s adaptation. However, if youâ€™re in the mood for a future Razzie awards contender that will have you doubled over in hysterics at ludicrous Hollywood filmmaking at itâ€™s best/worst, thereâ€™s definitely plenty about the movie to enjoy.
REVIEW SCORE
4
File Under: Action, Luke Evans