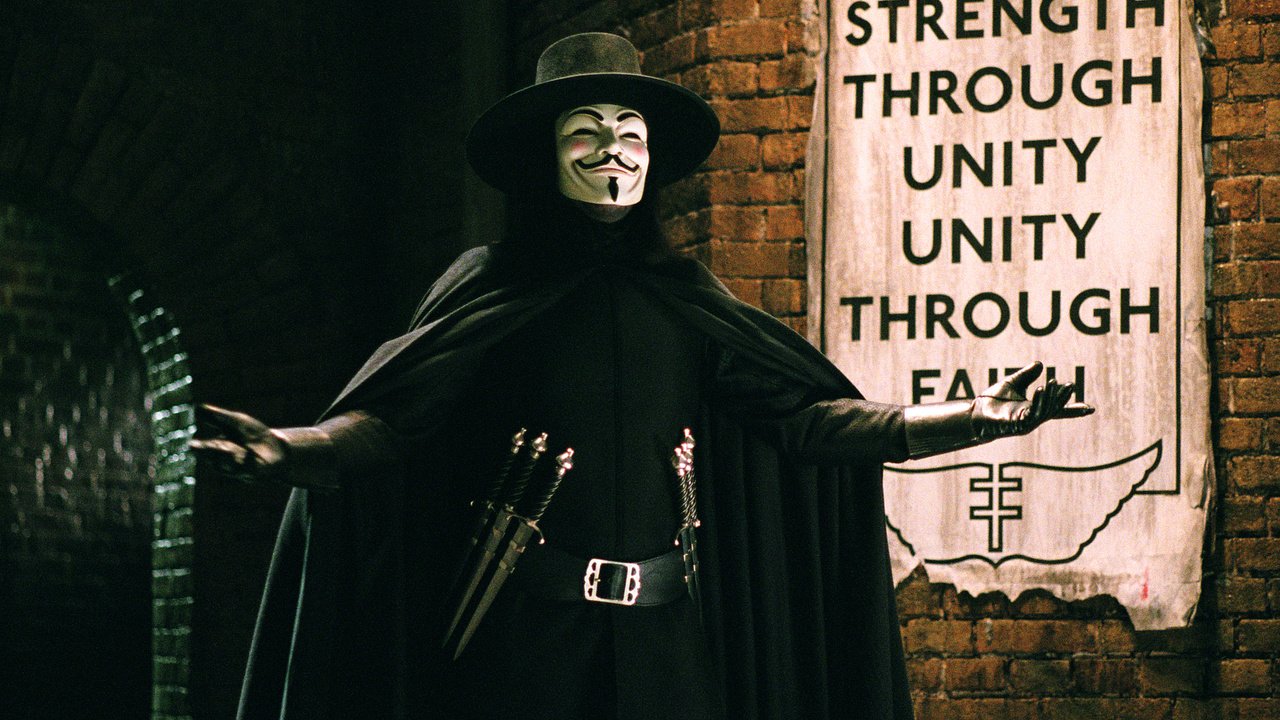 The films based on the works of Alan Moore have been a mixed bag; From Hell was by and large a successful adaptation, while The League of Extraordinary Gentlemen was, by all accounts, a fiasco. Now we have V For Vendetta, which will leave the author’s seminal Watchmen as the sole remaining major Moore work to be adapted. V For Vendetta for the most part succeeds in transferring the graphic novel to the silver screen, undoubtedly purists will cry havoc, for anyone looking for a solidly entertaining movie with ideas, Vendetta is a must-see.

Updated from the graphic novel’s prophetically paranoid allusions to the Thatcher Era, the movie V uses pretty much the same foundation as it’s comic predecessor. An England spared the evils of war, terrorism and disease that have ravaged much of the rest of the world, has been taken over by a fascist dictatorship, led by the Hitler meets Big Brother, iron fisted Adam Sutler (John Hurt). All visible minorities have been stamped as undesirable and been taken away to concentration camps, any one who utters one word of descent against the regime is shown no mercy, and Gestapo-like “Finger Men” enforce a strict curfew under threat of rape, torture and death.

Such a fate would have befell Evey Hammond (Natalie Portman) had she not encountered V (Hugo Weaving) at the beginning of the film. V, an inhumanly tough fighter armed with flying daggers wearing a Guy Fawkes mask rescues Evey from some Finger Men and then takes her to his Shadow Gallery, a kind of Batcave meets art museum and library. The vendetta which the title refers to involves V’s quest to liberate England and his desire for vengeance against those that imprisoned and experimented on him in a concentration camp called Larkhill. The third member of the film’s triumvirate is Inspector Finch (Stephen Rea), the man tasked with finding V.

The fans of the graphic novel will probably be disappointed coming out of the movie, in truth I was a little too having read the graphic novel and having a deep appreciation for its multi-layered and sophisticated narrative. Still though, I was pleasantly surprised by just how much of Moore’s voice was still in the finished film and generally accepting of the changes made to the script to suit the transference to the screen.

I’ve heard a lot of moaning about how the Guy Fawkes mask is more of a hindrance to the film than help, but I disagree. The V costume is a great visual: striking and archetypal. I f anything I’d say that the film really overemphasizes the Guy Fawkes connection, in the graphic novel it’s really nothing but a passing, really only symbolic given V’s first act of terrorism (which happens at the end instead in the movie). The movie seems to treat it as critically important, even including an prologue about the real Fawkes.

Regardless of the rigidness of the mask, Weaving does a stellar job as V, perfectly capturing the character’s idealism, insanity and physical presence. It’s a credit to Weaving that we are still some what sympathetic to V even after his actions at the end of the second act, which I will not spoil here. Portman plays well off Weaving but when left to her own devices she sometimes let’s the moments slip, that’s not a knock against her British accent either, but she really doesn’t take full charge of the roll. Rea was good as Finch, which was fortunate because one of the oddities of Vendetta is that it sometimes seemed to be about Finch solving the mystery of V rather than V trying to achieve his mission.

The political allusions of V For Vendetta are at best oblique. There are some vague references to a war that “America started” that brought about its downfall. The propaganda wing of Sutler’s government takes the shape of a 24 hour news channel who tow the party line word for word. The station’s main anchor, Prothero (Roger Allam), bears a striking resemblance to the likes of Bill O’Reilly and Sean Hannity. V even transmits a video ultimatum that could almost a lot in common with the one’s that occasionally come from Osama bin Laden.

None of these allusions are very specific, after all the scene where V commandeers the TV station is straight out of the graphic novel. The general message of the film is however explicitly clear: it’s not advocating terrorism, but rather it’s trying to encourage us to be wary about people who promise security at any price, that living in fear is the worst way to live and that you should be willing to stand up for what you believe in-lest someone else impose what they believe on you.

V For Vendetta may look like just a sleek successor to The Matrix Trilogy, but it’s got ideas too. A tight script from the Wachowski Brothers, competent leadership from first time director James McTeigue, a stellar cast, brilliant concept, and exciting visuals. V For Vendetta is better than we deserve, even for an Alan Moore adaptation.

V For Vendetta is better than we deserve, even for an Alan Moore adaptation. 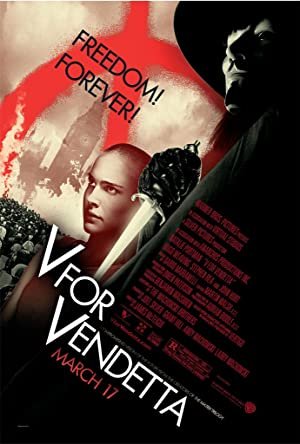