Cities: Skylines – The Board Game Review

An earnest attempt that ends up feeling flat 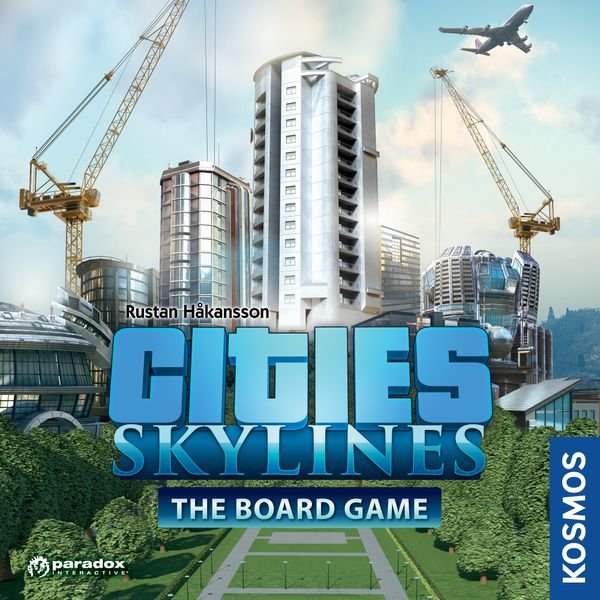 Cities: Skylines, based on the videogame of the same name, is an attempt to recreate the videogame city-building experience in boardgame form. Unfortunately, it ends up making you wonder why you bothered with it instead of just firing up the computer.

To be clear, Cities: Skylines is by no means an awful boardgame. It isn’t broken or unplayable, deadly dull or unbearably frustrating. It’s just… mildly disappointing. But it’s a consistent disappointment. For one thing, although it claims to be for 1-4 players, I can’t see it being much fun for a group. Because it isn’t competitive and has little to distinguish one player from another (it does offer role cards that give each player a different special ability), it is at its core a solo puzzle. Adding more players makes the puzzle a little easier (since you can see more cards and so plan out your order of play better) but otherwise merely adds more people to talk over choices that are fairly obvious to begin with. It can work as a couple’s activity, which is how I played it, but I’d say only when the point is time spent together rather than the game itself.

Beyond that, the game mainly suffers from being little more than its base mechanics. You have various sliders that you want to keep low, such as traffic, crime, and pollution, and others that you want to increase, such as money, power, water, trash capacity, and above all, happiness, which determines your final city rating at the end of the game. You take turns playing cards that each allow you to construct a specific building by placing it on the game board. Each building offers its own particular trade-off. Building a police station costs you money but reduces crime, for instance, while constructing a residential area might give you more workers but increase pollution and consume water.  And yes, sure, this is the core mechanic that lies at the heart of any city building game – you try and balance out competing demands on your resources while keeping your burgeoning population happy. But for a game to succeed, it needs to use its mechanics as a scaffold for something greater.

Consider, for a moment, a Dungeons and Dragons-based RPG. The basic mechanics are not, by themselves, particularly interesting. You start with a character who is essentially a series of numbers (your stats). Then you go out, fight against other characters who are also series of numbers (their stats), which in turn earns you still more numbers (experience), which you can eventually spend to slightly increase the numbers that make up your character.  It’s all very silly if you stop to think about it, which is why most games go out of their way to keep you from thinking about it. Instead, they generate an illusion – you’re not increasing a number block by one when you level a character stat in an RPG; you’re granting a grizzled warrior better skill at finding weak spots when he’s swinging his sword or teaching a mage how to conjure more powerful spells. And this illusion matters. People can spend hours clicking on enemies in a videogame to grind out everything they need to make their Chaotic Ray of Absolute Doom able to kill even the biggest monster, but very few of us would be happy clicking a blank screen for an entire evening to slowly increase a number from, say, fifteen to twenty.

And this is where Cities: Skylines falls flat. Literally. Its buildings are all represented by flat cardboard pieces that give no you impression at all of actually constructing anything. Instead, they feel like pieces in a Tetris puzzle, a sense further heightened by the fact that they come in a bunch of different shapes and sizes and have to be meticulously fit together in various sections of the board to maximize what you can do. And the Tetris puzzle aspect is kind of fun, I guess. But it’s not city-building, and it makes balancing the sliders a purely mechanical thing. You never feel like you’re building a bus station to relieve the terrible congestion on the south side of the city. Instead, you’re simply placing a cardboard piece after playing a card that keeps your sliders relatively balanced. To make matters worse, the cardboard pieces don’t even fit together on the board very well. It’s not a huge issue that completely prevents you from enjoying the game. It’s just… mildly disappointing.

Which brings us back to where I started.  A boardgame explictly based on a videogame needs to either capture the spirit of that game or else provide a unique experience that is nonetheless exciting to fans of that game. Cities: Skylines didn’t really do either for me. It seemed throughout that it would be better to just play the videogame – instead of flat cardboard pieces to represent buildings, I’d be able to see nicely rendered 3D images, and the game would be free to add layers of complexity to the city-building process in a way that is difficult for a boardgame to manage. It doesn’t help that if you play the intro scenario recommended for your first game, you play without including any of the most interesting cards. So for the first game you won’t have role cards to make players feel unique, you won’t have news cards to give a sense of dynamism in your city. You won’t have policy cards to make you feel like a city administrator. As a result, your first game is especially likely to discourage you from wanting to play a second.

So if you are going to give this one a try, I recommend adding everything in from the get go. The additional cards do help a bit.  The role cards give you some advantage to having more than one player, policy cards allow you to buy some of what you need without having to take up space on the game board, news cards impose disadvantages that add to the challenge, and unique building cards allow you to build special buildings that offer more benefits at the expense of taking up more space on the gameboard. The end result is a richer, more complex game than the recommended first session would make it appear.

Nevertheless, even having all the cards added in is not really enough to overcome the sense that this game would all be much better played solo on a computer. That said, I can see it maybe working for some people. Kids who are into city building simulators might have enough imagination to overcome the game’s defects. And there are probably some older players who love city building sims so much that they’d fall in love with the game anyway.  And anyone who has been yearning for single-player city building boardgame and doesn’t much like any other type of boardgame will doubtless be thrilled. As for me and my boyfriend, we didn’t hate the game – it was a nice time playing something a little different – but we’re not likely to ever play it again, simply because there are so many better designed and more interesting boardgame options out there.