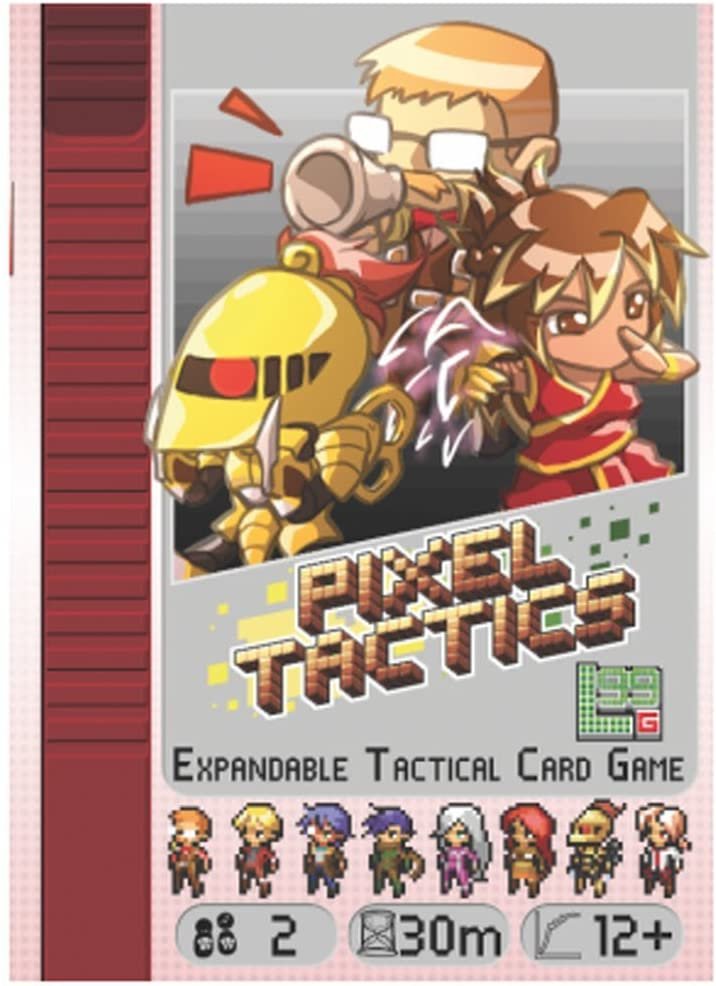 I have a pretty nice board game collection at this point. It’s certainly not the biggest or feature all the hottest new bits of cardboard and plastic, but it’s a strong, carried collection if I do say so myself. The problem is that a lot of it has been getting neglected for the majority of the year as most of it isn’t designed to play well with two players, and no matter how hard I try, my cat just won’t stop chewing on the boards, so duel style games have been a staple between my partner and I. Luckily, Pixel Tactics Legends will fit right into our duo playing lifestyle.

What Pixel Tactics is, at its core, is something akin to a turn based strategy game given the board game treatment. Each player has a matching deck of 25 cards and a 3 by 3 grid in front of them. From their starting hands they’ll select a card to act as the leader of their army, with each card having powerful special abilities and stats when serving this function. Following turns will involve players conscripting into their unit with the purpose of defeating the other player’s leader and protecting their own. Once a leader has been taken down, the game is over and the player who’s leader remains undefeated is the winner, so simple enough concept, mostly. Each row of a player’s 3 by 3 acts on that row’s given turn, front, middle and back (Or Vanguard, Flank, and Rear, to use the game’s terminology), and cards have different abilities depending on the row in which they are placed. A card in the vanguard position might boost the health of other cards in the vanguard while in the flank in might increase attack power. Not only that, but cards can also be used to activate one time use actions specific to each card rather than playing them into a players grid, making each card valuable in a variety of situations.

One mechanic that I am particularly fond of is what happens once a card is defeated, or, rather, the questions that that could lead to. So, if you defeat a card in controlled by your opponent it leaves behind a corpse, occupying that space and preventing your opponent from putting a new card there until it is cleaned up. Clean up is simple, it costs an action (Of which each player has two per turn) and they simply pick it up and put it into their discard, but there are some fairly interesting reasons why they may not want to do that. For one thing, it opens the card behind it up to do melee damage, or they may have some plan that will involve resurrecting that card later, but there may also some wacky stuff afoot. By wacky stuff I mean things like the Soothsayer can make all of your corpses into copies of the Soothsayer during your turn for the next few rounds allowing them to gain access to her fighting, healing, and rebuffing capabilities, or the Judge’s leader power that makes it so when your opponent clears a corpse in goes directly into your hand rather than their discard pile. Due to the varied utility of each card, players will need to adjust strategies on the fly and be ready to combat any number of absurd situations.

The artwork is fairly simple. Each card is illustrated with some cute pixel graphics as the title might suggest, and honestly that’s all that it needs. The focus here is on tight, interesting game play and I can’t see how lavishly hand painted visuals would add to the overall game. What would be nice, however, is an upgrade to the components or even including enough to comfortably play the game. Rather than an actual board, this comes with what is essentially a flimsy poster meant to be spread on the table, I’m pretty sure I ripped it the first time I set it up. It doesn’t sit flat against a table and is generally pretty frustrating to place cards onto. Additionally, the tokens provided with the game are too few to really track damage on individual cards throughout the course of a full game, especially as they are double sided and the back sides may not be in anyway related to the front, leading to situations where a single chip may need to be placed in multiple places. Also, the manual, though generally pretty understandable, neglects to explain what most of those chips are even for, with specific cards noting an effect that will need to be tracked that might be covered by one of these tokens, but it’s impossible to know for sure.

Pixel Tactics Legends is a great little two player tactics game filled with interesting decisions and nearly endless variety. It comes in at a budget price but is certainly lacking in quality in regards to its components.

I loved Pixel Tactics Legends through and through but couldn’t stop thinking about how much I would rather have a neoprene mat and more tokens.
REVIEW SCORE
7
File Under: Board Game, Tabletop