Justice for wasting our time with The Hand 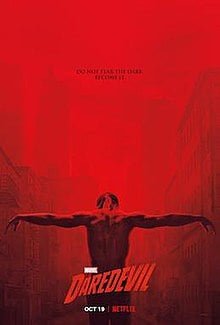 Daredevil has a lot to clean up in its inaugural season three episode. You see, Matt Murdock was supposed to be dead after a giant skyscraper caved in on him. But in true comic book fashion: he’s not! Matt lives it up conveniently at the Saint Agnes Orphanage he grew up in and gathers his strength. Not before waxing poetic on the bible of course. “I know the story Matt,” proclaims his nun-friend.

We all do, sister

After roughly 40 straight minutes of “Should I or shouldn’t I be Daredevil again” (spoiler, he kind of has to be if Marvel wants the show to keep going) he’s training hardcore, identifying ravioli by sound (seriously), and getting back to normal by…having sanctioned boxing matches in the basement of a holy place. It’s a rapid-fire take on part of the Born Again arc (one of Daredevil’s dominate 80’s storylines) but it’s far better than most of the time-wasting intros for other Marvel Netflix shows.

There’s a fair bit of wandering in the first three episodes but it’s acceptable meandering, bumped by the strength of the cast and the reduction of extreme eye-rolling melodrama. At this point it seems like the Marvel Netflix crew know the dangers of over-saturation, as proven by the shocking cancellation of Iron Fist: the first-ever show in this continuity to get the axe across a whopping 11 (!) collective seasons. If Daredevil goes completely off the rails, there’s no going back.

Things swiftly improve. Karen is still in the mix and she knows about Matt’s alter ego, vastly improving their once withholding dynamic. Foggy is actually given things to do in the third season and gets a chance to shine as the world’s best friend. Vincent D’Onofrio prominently returns as Kingpin after a monitored release from prison, and as one of the most enigmatic parts of the show, is welcome. His in-head arguments with Matt are a riot and he manages to really turn the tables in a way that most other villains really haven’t so far. He continues to be one of the most formidable characters in the Marvel universe and D’Onofrio’s gravitas sells it. Even a blank stare from D’Onofrio’s Kingpin means something. Although Marvel runs the risk of giving us too much of him I hope they find a way to keep him in the fold going forward. The company has always had problems giving us captivating villains in both the film and TV realms but has clearly found their muse here.

Another addition worth mentioning is Benjamin “Dex” Poindexter, otherwise known as Bullseye and the secondary antagonist of the season. We get a brief origin story here that doesn’t feel bloated or rushed, even if is a bit hollow (I see what they were going for here but the whole psychoanalysis angle of what makes Dex tick is too reductive). The joint team of Kingpin and Bullseye, two characters devoid of “traditional” superpowers, helps ground the season in a universe where love-interest super ninjas can come back from the dead. The concept of Bullseye using office equipment as instruments of death sounds silly on paper, but works effortlessly on-screen, even with the limited amount of screen time he gets in the first half of the season. He could have stood to be a little more fleshed out before he became irredeemable, but given that Kingpin is the real focus he doesn’t feel necessarily wasted.

Daredevil also greatly benefits from the complete removal of The Hand (enacted at the end of The Defenders), a silly adaptation of an evil ninja clan who mired an entire half of the last season. Matt, who really shines in one-on-one situations, taking on an entire organization that bled into several other shows (running out their welcome) got old quickly. Again, Bullseye and Kingpin are the perfect marriage.

From what Netflix provided us so far (the first six episodes), Daredevil manages to stay on target and once again rise above most of the other Marvel TV offerings. A lot of it falls back on Charlie Cox, who has always been the anchor the entire universe sorely needs. If there was one actor who deserves a film adaptation, it’s him.

Daredevil is back on track as it returns to its roots that kicked off the entire Netflix Marvel universe.
REVIEW SCORE
8
File Under: Action, Daredevil, Marvel, Netflix