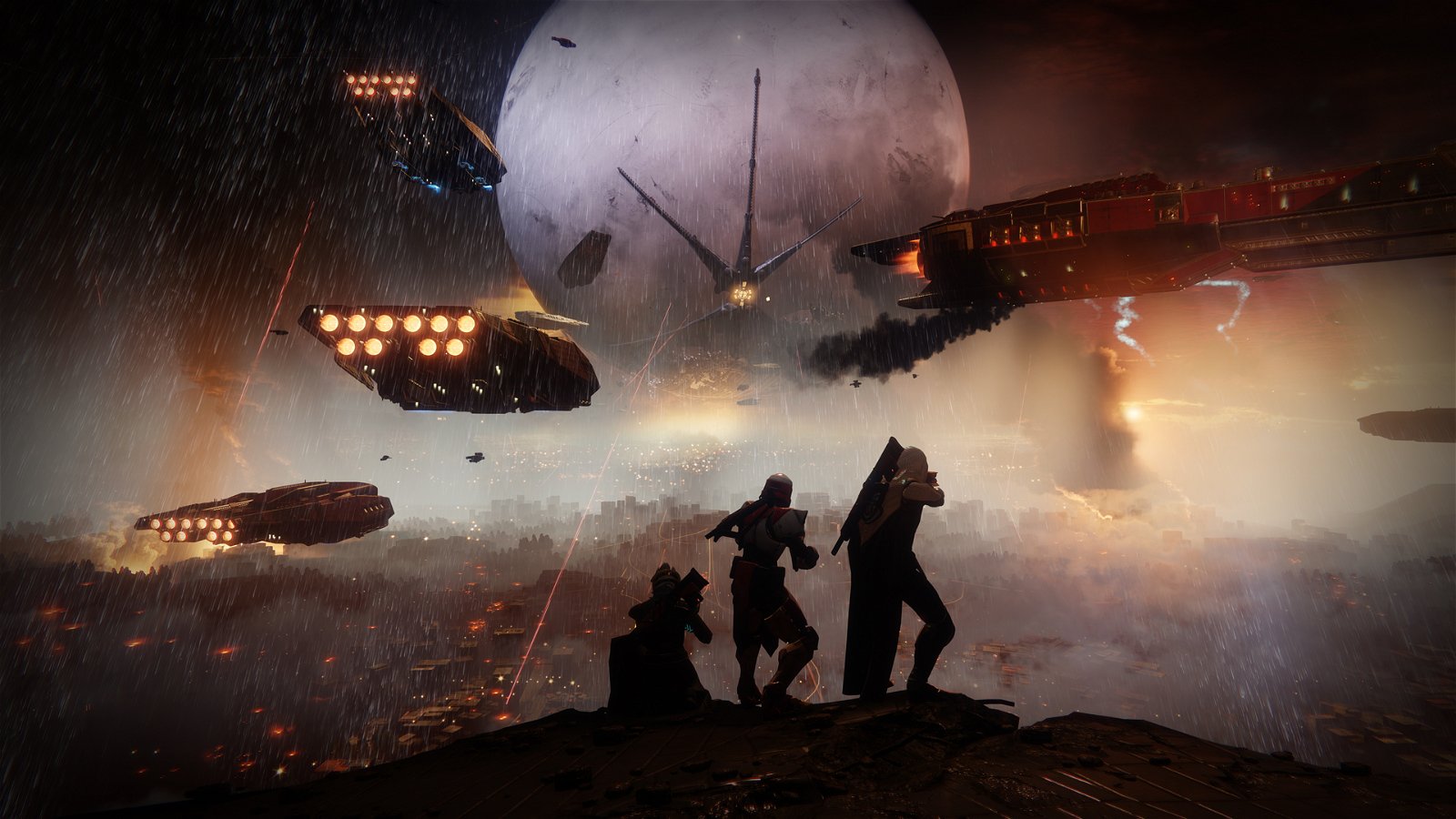 Bungie is a studio that knows how to build games. They are a studio whose work I have loved since the early days of Myth on the PC and Mac, and while not every game they build is a knockout success, they all have a level of quality and polish that few studios can boast. Yet, when Destiny launched, I could not get hooked. Sure, I spent hours playing through the story, joining my friends on some raids and pushing my character slowly up in stats, but somehow it always felt like something was missing. It was a well-crafted experience that had some astounding ideas, but it always felt it could be more. Bungie has taken note of these shortcomings, and Destiny 2 shows how you can take a good idea, and make it something truly memorable.

The world of Destiny 2 follows close on the heels of the first title. Humanity has to rebuild civilisation; where there was once nothing, humans have built a stronghold that can stand against the forces trying to kill them. Yet it is here, in humanity’s triumph, that the great fall and the stripping away of all hope by the Red Legion takes place. With the Red Legion trapping the power of the traveller, Humanity is once again pushed back into darkness.

Starting with the first mission of Destiny 2, titled “Homecoming”, I jumped into the shoes of the Guardian as I tried to defend against an oncoming onslaught of the Red Legion. Digging myself out of the rubble of the once great tower, the first thing that I noticed was the spectacle that was on display. Destiny has always had great combat and brilliant level design, but it never managed to capture the moments of wonder I experienced when I first played Halo—at least, not until now. From the start to the very end of Homecoming I was on the edge of my seat, talking down the legion as it tried to tear away the power of humanity. It was nothing short of brilliant.

From the combat to the moments of tension and even the look of the engine, Bungie has taken what was good about Destiny and made it great. The fire and smoke swirling around your character as you push through the waves of creatures that are throwing everything they have at you was an experience that kept me wanting more. There was a magic Bungie brought to Halo, that somehow was lost in the first Destiny, and they managed to find it once again with Destiny 2.

Moving on from the wreckage of Earth, you are taken to the Red Legion capital ship where you try to take the fight to the enemy. As you work your way through the spacecraft, you witness a battle taking place on the planet’s surface as well as the struggle humanity is facing. It all works to build a narrative that gives you what is needed to not only care about the story, but the drive and urgency to push forward.

The campaign was the only segment I managed to play while at the event in LA, but they also gave plenty of time to experience Strike game mode, PVP and what Destiny 2 was like running on PC. But before we get ahead of ourselves, touching on Strike is important. This is the mode that most excites me about Destiny 2. A team of players jumping into a mission as a team is always the most fun way to play online games. While yes, PvP is fun, and often a good way to sit down and enjoy a game, if I want to play for hours on end, I need some co-op gameplay. This is the itch that Strike scratched. The mode was fast, fun and enjoyable.

The strike mission on display was one that takes place on the planet of Nessus. Filled with rich colours, floating platforms, and ancient alien technology, the planet felt as if it were a fully realized planet from No Man’s Sky. From the vegetation to the architecture, it was a planet that was a wonder to witness and explore.

These missions push the over-arching narrative that permeates throughout Destiny 2, the idea that humanity must rise from the ashes to reclaim their lost power. As you fight through wave after wave of enemies, you and your team finally make it to a massive digging machine. The massive construct, moving and changing the world as you try and push past it, shows the scale and scope that Destiny 2 allows. Trying to avoid the crushing blades while fighting everything that stands before you made for some of the best moments at the event and gave an example of how Destiny 2 is trying to push the envelope on what co-op gameplay can be—and it was spectacular.

The segment ends in a multi-stage boss fight deep underground. As you take down the enemy’s life, the floor breaks away, plunging your party deeper into the planet. Eventually, you will find yourself on a small platform in a silver pool that is deadly to the touch. It is a good finale to a mission that gave a great vertical slice of what Destiny 2 has to offer.

While I personally have never been a fan of PvP in a game like Destiny, and there are far too many amazing offerings already in the space, it is hard for a new game to offer what a game like Overwatch already does. That being said, Bungie knows how to build fun shooters to play against other people. So, I went into the new 4v4 excited to see what they have to offer.

It is a mode that keeps both teams guessing, with a constant sense of tension no matter what side of the battle you are on. The map design ensures there are no safe moments—with plenty of choices in how you attack or defend—and shows the skill of the level design team at Bungie. It is hard to say if this mode can replace a game like Overwatch, but I would argue it does not need to. It offers players a way to enjoy Destiny 2 with a game mode that is crafted by one of the best shooter teams in the business. It is sure to be enjoyable for anyone willing to jump in.

With Destiny 2 hitting the PC via Battle.net, it is amazing to see it running so well. After some time with the PC version of the game, it quickly became clear this would be my new preferred way to play the game. The mouse controls are spot on, and with the precision the mouse allows, Destiny 2 quickly became a game that was more about accuracy and speed rather than the auto aim experience that is found on consoles. The visuals are also noticeably crisper, and with the buttery smooth framerate on the PC it was hard to go back to the console version. While I was not sure if Destiny would translate well to the PC, Bungie has exceeded all expectations and this platform will be where I personally play the game come release.

Destiny 2 is a game that lives up to all the promise of the first Destiny. Bungie has fixed every issue I had with the first game, at least in the demos I played in LA. Beyond that, they have made me care about the Destiny universe again. Humanity is back to being the underdog, and it is a story that makes me want to fight alongside my friends until we find the ultimate victory. With improved graphics, new modes, and much-needed refinements, Destiny 2 is a game that improves on the first game in every possible way. While it is hard to say if the final product will live up to these demos, if it does, Destiny 2 will be a must own game this holiday season.