Best Comics to Buy This Week: The Return of Wolverine

This week the best comics list features the return of Wolverine to Marvel, a new issue of everyone’s favourite vampire book, Redneck, and some good ol’ fashioned crossover action in Scooby-Doo Team-Up.

Wolverine’s recent history over at Marvel has been a tumultuous one, to say the least. In 2014 the character lost his healing ability and ended up dying soon after as a result. And on the film side, he died recently in 2017’s Logan while saving a number of young mutants. In summary: Marvel likes killing this guy, but they also like bringing him back and this week’s Hunt for Wolverine #1 looks to be the start of Wolverine’s latest rebirth.

The series is written by Charles Soule, which is fitting as he’s the one who killed off the character back in 2014. Soule has shown a knack for writing great superhero comics and with David Marquez on art, it’s definitely going to be a pretty book. What’s more is that this series promises to have far-reaching ramifications, and is very much the most anticipated Marvel storyline so far this year. 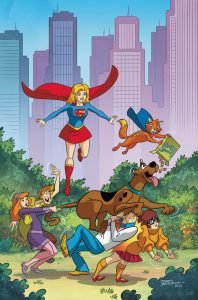 One of the best all-ages comics of the past couple years, Scooby-Doo Team-Up has stood out in the comic book landscape with its inventive crossovers and all-ages fun. Over the past 32 issues,  Scooby and The Gang have met an assortment of DC Comics and Hanna Barbera characters including Wonder Woman, The Flinstones and Aquaman.The series is very much a spiritual successor to The New Scooby-Doo Movies, and a 1970’s TV series which involved Scooby and The Gang crossing over with an assortment of different properties including The Jetsons and The Addams Family.

As for the actual comic, this week is perhaps the most exciting crossover yet as it features guest-heroes Supergirl and Streaky the Super-Cat. How is Scooby-Doo, a dog who has a passion for chasing felines going to fair against a super-powered Kryptonian kitty? Will he be able to catch her? Does Streaky like Scooby Snacks? Either way, it promises to be a fun-filled ride. 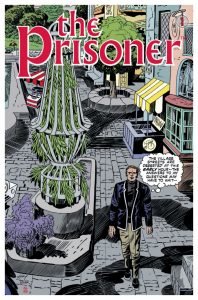 The 1960’s were a great time for espionage style TV shows. From Get Smart to James Bond, the decade was very much the emergence of the spy genre. One of the great and oftentimes unheralded shows from the decade was The Prisoner, a British show about a former government agent known as Number Six who as the name suggests, is imprisoned in a mysterious seaside village isolated from the rest of the world.

The Prisoner only ran for one season and ended with Number Six’s ultimate fate left unrevealed. As a result, this new series has a lot of directions that it can go, and the cliffhanger nature of the comic book medium fits perfectly with the source material. This issue also features a bevvy of great variant comics by top British talent and even one by the late great Jack Kirby. With fellow Brit and top talent, Peter Milligan on board to write the series, The Prisoner is an enticing one, and will no doubt feature a lot of prisoners and numbers to keep track of. 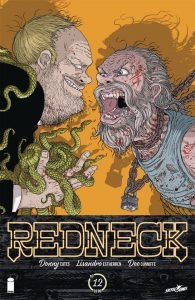 There have been a ton of vampire related stories told in the past 10 years. Blame Twilight if you will, but the fact is that very few of the subsequent vampire stories have managed to do much of anything new or novel. Thankfully, Redneck is very much an exception to this mediocrity as it manages to balance character development and the intricacies of family ties while also providing some gruesome vampire action.

While Redneck took a while to hit its stride it has since become one of the best comics on store shelves. The last issue dropped a major bombshell involving the main character Perry’s true family and the ramifications have already proved to be significant. Writer Donny Cates is one of the top rising talents in comics and between Redneck, God Country and his work at Marvel, he is arguably the best writer working in comics today. 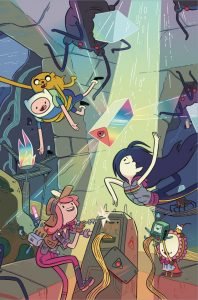 Adventure Time is a quirky series. With its larger than life antics and unique sense of humour, its been a smash hit on TV as well as on comic stands. The current series which launched back in 2012 has featured a number of off the wall adventures featuring Jake, Finn and Princess Bubblegum going through The Land of Ooo. With issue #75 the series is finally at its end, but thankfully it’s an oversized goodbye and one that features a top-notch creative team.

With the rising comic talent team of Ryan North, Christopher Hastings and Mariko Tamaki lending their writing chops to this issue, it’s sure to be good. What’s more is that they all excel at writing Young Adult aimed comics and their other work is more than worth checking out. On the art side, Zachary Sterling has been a perfect fit for this series since he joined in issue #36, bringing a unique blend of energy and enthusiasm to the page.

Liked this article and want to read more like it? Check out Alex Handziuk’s interviews with Archie Writer Ian Flynn and Overwatch Voice Actress Lucy Pohl.