Look up in the sky. It’s bird. It’s a plane. It’s a couple of Super Friends. That is the essence of Supergirl’s first two episodes for Season 2. Supergirl’s fun, often campy, appeal of Season 1 is brought back for its second year. And it’s helped along by the Man of Steel himself.

Superman finally makes a triumphant return to the small screen. Supergirl’s Superman is surprisingly good both as the Last Son of Krypton and his bumbling alter ego, Clark Kent, and it’s perhaps with Clark that this new incarnation of Superman works best. Actor Tyler Hoechlin does a terrific job playing a type of Clark Kent that has been missing from DC’s most recent film versions of the character. While Henry Cavill in Man of Steel and Batman V Superman: Dawn of Justice gives superior performances, there is an element missing and it has to do with the past. If you’re old enough to remember (and I’m happy to admit I am), audiences were treated to the ultimate Superman / Clark Kent in 1978’s Superman the Movie. Hoechlin’s performance on Supergirl is reminiscent to Christopher Reeve’s Clark—a loveable awkward butterfingers who had audiences in his hands. 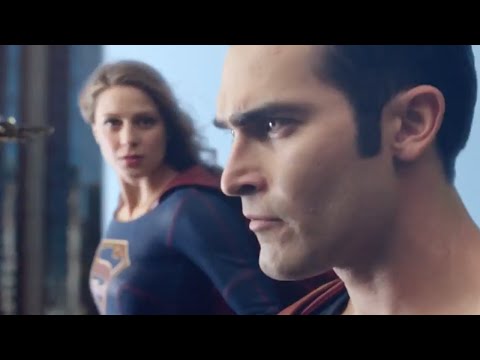 I have to admit, Hoechlin’s performance brought me back to the Superman of an age ago and made me enjoy his performance that much more.

As for the episodes themselves, they are full of action, lively characters and witty banter. But most of all, these were two episodes for middle-aged fans whose inner geeks were awoken with the homages throughout. From Crisis on Infinite Earth to Superman the Movie and even a few sprinklings of Star Wars, the tributes were well crafted and timely. There were just enough to rekindle that nerdy feeling.

In Supergirl’s opening episodes, the series sets up two new villains. The first episode, titled The Adventures of Supergirl, sees Lex Luthor behind bars and his sister coming to the fray, wanting to put a new face to Lex Corp, now called L Corp. She is seemingly on the side of good, as even Clark apologizes for his mistrust of her in the beginning. Odds are, Superman’s initial feelings of her will be dead on. In the second episode, The Last Children of Krypton, Superman has decided to stay a little longer with Supergirl and National City is lucky he did. A new villain has emerged. A Superman villain from comics past, Metallo, wreaks havoc on the Krypton cousins and sets up a larger threat at the episode’s conclusion.

So, how did Supergirl perform in the shadow of her more famous Super Friend? Frankly, quite well. Actress Melissa Benoist is still her perky self. To this reviewer, Supergirl is essentially the female version of The Flash. She’s quirky, a little clumsy and completely adorable—all the attributes Grant Gustin brings to The Flash.  Benoist brings tons of vibrancy to Kara Zor-El and her secret identity. However, her being both a jittery bumbler and now a reporter are too similar to Clark’s character.

Too on the nose DC.

Supergirl Episodes 1 and 2 kicked Season 2 off with a bang. They were more than enough to keep me salivating for next Monday night!

Final Thoughts
Supergirl Episodes 1 and 2 give audiences a real treat. We’re reunited with a Man of Steel reminiscent of the greatest Superman of all – Christopher Reeve.
REVIEW SCORE
8.5
File Under: Comics, Superman