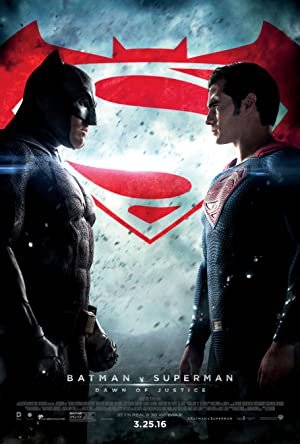 Alright nerds, it’s finally here: the movie that you’ve been doubting with dread for three years (or that you’ve been quietly excited about, but won’t admit to it in mixed company). Batman V. Superman. The one where the Superfriends become Rock Em Sock Em robots. Warner Brothers and Zack Snyder’s attempt to jumpstart an entire DC cinematic universe. A dark, brooding, super serious counterpart to all that fun going on over at Marvel/Disney. You’ve whined, you’ve pined, you’ve dreamed, you’ve had anxiety attacks. But all that’s over now. The movie is here. You can finally feast upon this 2.5 hour epic of superhero depression. And the verdict? It’s fine. Could be worse. Not a disaster and certainly not a great or even particularly good movie. It’s a mess in all the ways the internet predicted it would be before shooting even began. However, Zack Snyder’s greatest strength is creating massive comic book panels come to life. So whenever icons are punching each other on an IMAX scale, there is some fun to be had. There’s a whole lotta sloppiness leading up to and during those big old brawls, but there’s no denying that seeing old Batty and the Boy Scout duke it out with a $250 million budget has its charms. Whoever thought that would happen? Even in a disappointing movie.

You know what you’ve never seen in a movie before? Batman’s origin story. That’s why Zack Snyder is kind enough to open with a long operatic rendition of the most filmed origin of all time so that you have extra time to grab popcorn. From there, we see Bruce Wayne (Ben Affleck) running around the crumbling streets of Metropolis during the smashy-smashy climax of Man Of Steel. He’s not too impressed and begins to wonder whether or not any being on earth should have that kind of power. From there we jump ahead a bit and see a world where Superman (Henry Cavill) is flying around saving people and the government is concerned that all of this saving is unsanctioned. Batman is investigating the flyboy as well. Ditto Lex Luther (Jesse Eisenberg), now a twitchy millennial who likes to give speeches. Some kryptonite has been found, which should help. Plus, Clark Kent (actually Superman…shhhhh!) stars investigating the ‘Batman’ vigilante in the neighbouring Gotham City and he’s not too impressed with the dark knight’s approach. Oh and there’s also a government conspiracy plot, Luthor’s obsession with Zod’s corpse, a mysterious woman (Gal Gadot) wandering around with wondrous powers, Lois Lane investigating various strands of plot exposition, Luthor’s “meta human project” that gives iconic symbols to all future Justice League members, and a bunch of other nonsense.

So, that is far too many plot strands for most movies to juggle, never mind a movie about superheroes punching each other. The first 90 minutes or so of Batman V. Superman is just a relentless stream of sequences desperately trying to jump start at least one plot that that is riveting and it quickly becomes irritating to merely keep up. There’s a chance that at one point this movie was merely about Lex Luthor trying to orchestrate a fight between Superman and Batman that actually made sense and flowed like an action movie should. But that script is long gone. As predicted by millions, Warner Brothers’ mandate to use this single movie to launch an entire universe worth sequels has turned it into an overstuffed mess. Remember all those complaints about how Iron Man 2 felt more like an Avengers pilot than a Iron Man sequel? Well, that feels like a succinct and tight bit of minimalist genre storytelling compared to the clustercuss of set up crammed into Batman V. Superman. It’s endlessly frustrating because a movie with VS. in the title should be as simple and direct as beat em’ ups get. Not this one though. According to Zack Snyder and co. the fastest way to get from A to B is to quickly name check and visit all other letters in the alphabet first. As a piece of storytelling, it’s a total mess.

However, Zack Snyder’s talent as a filmmaker has never been storytelling. It’s always been in massive, imposing visuals that feel like comic book splash panels on steroids with a few cans of protein shake strewn around the sides. There’s no denying that the guy delivers some spectacular eye candy here (particularly in the massive IMAX enhanced sequences). The fisticuffs sequences are massive and satisfying enough that this thing should likely recoup WB’s investment through spectacle alone. Oddly the big BVS main event the movie is titled after is a little small and lackluster, stealing chunks of Frank Millers Dark Knight Returns and mostly showing the 20th century icons crashing through walls and beating each other with bathroom fixtures like Vin Diesel/The Rock. That’s mostly because the climatic battle actually comes next with an awkwardly ugly Doomsday and DC’s holy trinity uniting on the big screen. It would be a lie to say I wasn’t smiling contently when Superman, Batman, and Wonder Woman finally teamed up. It’s strange to live in a world where that happened on such a large scale and Snyder at least makes it feel appropriately epic.

Ben Affleck also makes for a surprisingly solid Batman as well. It’s a role defined by posing and scouring, which he can do just fine. The Bat-fight sequences are probably the best yet in live action, with the character actually moving around like a massive blunt force in a satisfying way (however, his “no guns” rule does not apply and he’s not against killing people by association either, which is weird). A Bat-fleck spin off movie might actually be worth seeing. Gal Gadot’s Wonder Woman might be distractingly shoehorned into the mess of plotlines, but she’s actually quite promising in the role. Sadly, those are the only performances worth signalling out as satisfying. Cavill’s Superman is just as dull as last time and oddly absent for much of the movie even though he’s in the title and this is technically a Man Of Steel sequel. Eisenberg’s twitchy, caffeinated Luthor is an overblown mess of a performance that desperately needed to be pulled back in nearly every way. Amy Adams has so little to do beyond listen to plot and cry when needed that it’s a shame someone so talented was wasted. Ditto Diane Lane, Holly Hunter, and especially Jeremy Irons who spends most of the movie sitting at a desk talking to Batman through a headset. So much of this blockbuster reeks of missed opportunities. It’s likely due to an overstuffed and ever-changing script that short-changed the star cast through editing. Or maybe it’s just due to the fact that Snyder isn’t quite sure what to do with actors when he isn’t smashing them together like life-sized action figures. Who knows?

There are, of course, many, many plot holes, continuity errors, confusing absences, and bastardizations of beloved comic book properties that will irritate the reverent Comic Con crowd. I won’t bother listing all of them because it would take ages and the internet will be doing that for at least the next year nonstop anyways. Batman V. Superman is a mild disappointment and a mess, there’s not doubt about that. However, it will be screamed about as the ‘worst movie ever’ in a variety of blog n’ twitter hissy fits and I feel like that’s unfair (after all, that happened with The Dark Knight Rises, which was better than this). It’s not the worst movie ever. There are even plenty of things to enjoy that Snyder and co. got right. The trouble is that this messy franchise pilot is dragged down by corporately mandated requirements and worst of all it doesn’t live up to the mouth-watering promise of finally showing Batman and Superman fight on the big screen.

It’s possible that no movie could have lived up to the decades worth of school-ground, comic book store, and message board fantasies. But we certainly deserved better than this. However, it’s also worth noting that things could have gone far worse than this and somehow despite all of the pre-release coverage and spoiler-filled trailers, one big secret has been kept from audiences and was actually quite a big risk. Sure, it’s not perfect, but what movie ever could have lived up to these expectations? If you only want the Batman V. Superman movie of your dreams, stay far away; however, if you just want to see them fight and don’t mind having at least as much to complain about and praise once the credits roll, you could do worse. In conclusion, meh…whatever. This movie exists now, I guess. Bring on Civil War.

The first 90 minutes or so of Batman V. Superman is just a relentless stream of sequences desperately trying to jump start at least one plot that that is riveting and it quickly becomes irritating to merely keep up.
REVIEW SCORE
6
File Under: Batman, Ben Affleck, Comics, DC Comics