One of the absolute best aspects of cRPGs (an old school term for computer RPGs, dating back to the old BioWare and Obsidian days) is creating your own party and completely owning it, inside and out. And I don’t mean like, choosing a “face” and making light Telltale type decisions, but fully crafting characters in your own image, in whatever way you see fit. While it doesn’t have the flash and panache of a lot of the aforementioned big-budget developers, Logic Artists is on to something with Expeditions: Viking.

So, in that creation aspect I was talking about, Expeditions: Viking nails it. In addition to gender, you can also choose the skin, eye, and hair colour of your characters, along with just about every facet of your clothing. From there players can allocate points into five different primary stats (strength, endurance, finesse, perception, and sense), which influence eight other secondary stats. Are you getting the sense that this is going to be a numbers game yet?

Expeditions: Viking starts up with the main character’s father dying and leaving his clan without a leader. As is the case with most clans there are many threats looming constantly, and players will need to explore to survive. Enter the very first mission in Denmark, leading up to the main campaign on the shores of England. There are elements of religion involved (like the constant mention of Valhalla and Odin), but it’s not a driving factor insomuch as your character getting lightning powers and glowing eyes as a result.

No, things are more grounded, and Expeditions: Viking lets you know right away that this isn’t high fantasy related. Given the sheer number of games where you’re fighting demons while conquering Japan (including the typically hyper-evil Lord Nubunaga) and so on across the globe, this gritty (but not overly so) feel is welcome. I also appreciate the old school dialogue system, which basically narrates everything happening around you in a Dungeons & Dragons type fashion. It’s old school, but it helps instill the idea that you’re playing a role and not a pre-determined archetype.
In the preview build I’m playing with there haven’t been many major choices, but lots of subtle ones. For instance, really early on a thegn (read: a lord of sorts) speaks ill of your family. You can choose to deal with their transgressions on your own or with a companion, elicit suggestions from your clan, and spare or kill them at the end of the skirmish.

Which leads me to Expeditions: Viking other main event: combat. It’s all turn-based on a hexagonal grid, with a very clean and helpful UI accompanying it. Your entire party is easily identified with appropriate avatars on the bottom of the screen, and their current state (whether they’re available to use or out of actions) is displayed in multiple locations, including below their actual character model. It’s much more informative than a lot of other esoteric strategy RPGs.

And while the combat itself doesn’t really feel new in any way, it gets the job done. You have your standard grid-to-grid melee combat options, as well as ranged attacks and spears, which operate as a midway point between melee and ranged. Lethal and non-lethal options only add to the allure of the ability to role-play. I also really dig that you can move in, attack, and then move out with your remaining actions to let another melee unit slide into position.

There are plenty of special abilities to make standard units like archers more interesting, like crippling effects or party buffs. General movement is also really open, and the entire grid is easily identified with clear borders. Positioning is really important, because moving within earshot of an enemy can allow them to make an “attack of opportunity,” similar to XCOM‘s overwatch function. It’s a lot to take in, but with the aforementioned ace UI, it’s manageable. 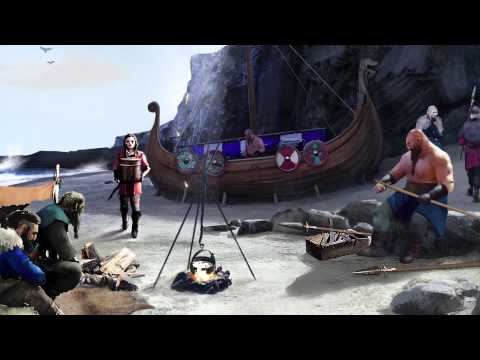 While it might not seem like much looking at screenshots and the like, there’s a fully-fledged RPG lying in wait with Expeditions: Viking that’s surprisingly welcoming to newcomers. If you’re even remotely invested in this historical period and have never checked out a strategy RPG before, this might be a good place to start.