No Controller Needed Only Mind Power 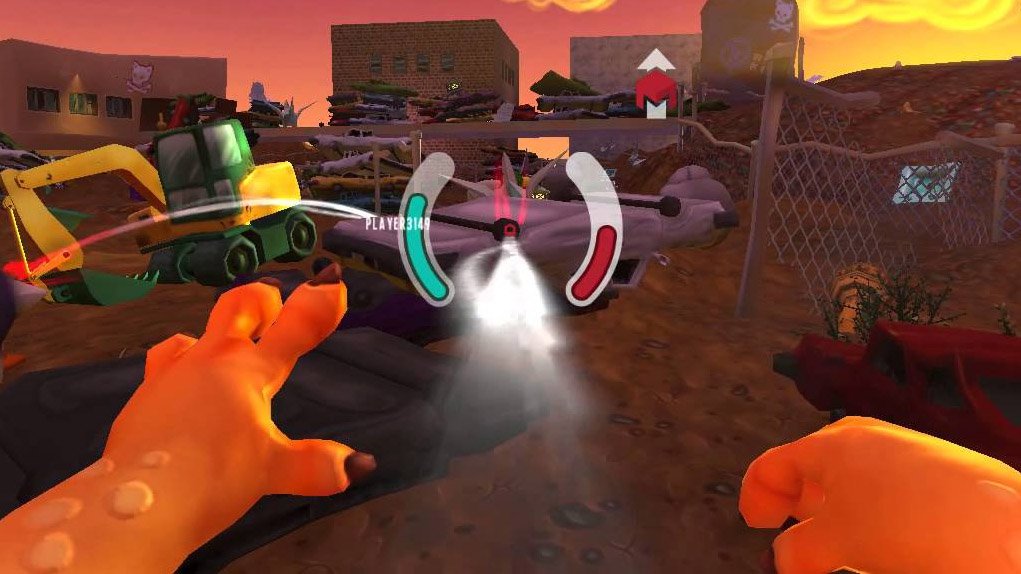 With those new Star Wars teasers coming out, the excitement and goosebumps are also bringing me back to that childish fantasy that so many of us had: Oh, the things I would do if the force was strong in this one!

Game developer Lat Ware is one of those people, as well. He saw Star Wars for the first time when he was six years old and has wanted to be a Jedi ever since. Fortunately, he’s taken steps to help us embrace the Jedi in all of us.

Crooked Tree Studios’ Throw Trucks with your Mind (which Ware created) is a game that hooks the player up to an electroencephalogram (EEG) headset, called the MindWave, and reads the levels of focus and calm in their brainwaves. These levels are what control gameplay. The “arena-based first-person thinker” focuses on multi-player combat. The game is a literal “battle of the wills over the internet,” Ware told CGM from Mountain View, California, in a phone interview.
It sounds like some kind of trick, right? Ware mentions that this mode of thought was one of the biggest hindrances he faced when trying to raise money for development with a Kickstarter campaign in Feb. 2013. After the first few days donations began to flat line, he said.

“I realized that people weren’t believing in the product. It was too far out there. And the only way to get people to actually back the Kickstarter would be to get them to play it.”

Ware then committed to getting as many people to demo Throw Trucks as possible and for the duration of the Kickstarter campaign, attended every event he possibly could that was remotely relevant to his neurogame. He attended three to four events per night, demoing from 30 to 60 people per event. A self-described “severe introvert,” this was exhausting work. Ware continued getting Throw Trucks into as many brains as possible until it finally reached its fundraising goal of $40,000.

“I just curled up into a ball on the floor that day,” he said.

Ware’s inspiration to make a neurogame also came from his history of Attention Deficit Disorder. When he was 13, he had neurofeedback therapy to help mitigate his ADD. This allowed him to learn how to control his brainwaves. But it also helped him come to the realization that he needed to use this technology “to make the ultimate Star Wars game.”

Naturally, Throw Trucks with your Mind’s dependence on the player’s ability to control their own brain waves could have a therapeutic effect. “Could” is emphasized. Ware said that he and the Throw Trucks team are currently working with various universities to investigate the game’s therapeutic potential. It’s possible Throw Trucks might help with attention and anxiety disorders.

“We’re going through the proper channels of validating that before making any claims,” Ware emphasized. “We don’t sell snake oil.”

“That’s actually by design,” said Ware. “We didn’t want to get too far into the potential of neurogaming because of learning curves.”
He hopes that EEG headsets eventually become a standard peripheral device on consoles. The cost for a MindWave headset is about US $80 right now, but about ten years ago cost around $5000. While the cost of this hardware has declined, the market for games like this is still very small. More time will need to pass before some of his ideas for the future can come to fruition.

And he’s sure got them. Ware himself would never want to create a game that rewards any kind of negative reaction or thoughts (anger is one of the reactions the EEG headset can detect), but he did mention the possibility of going “totally dark side” with neurogames.

“If you’re introduced to something and it’s not scaring you, then it won’t use that in the future,” said Ware. “So you could have a tailored horror experience geared toward what exactly is going to (affect) you (most).”

Throw Trucks with Your Mind will be released on Steam this May and can also be purchased through the store on the game’s web site. The six-person team at Crooked Tree Studios are constantly releasing updates and intend to add new game modes, including puzzle mode, in the future.