Hello and welcome once again to Patch Notes C&G Magazine’s bi-weekly column that focuses on post release patches and DLC. This week I’ll be talking about Batman: Arkham City. It’s been quite a few months since Arkham City took the gaming world by storm and so far things have been pretty quite in Gotham’s super-prison, at least until now. Recently Rocksteady, the developers behind the Bat have begun to tease some new content for one of last years biggest and best games. This content will be taking the form of what is being billed as the “Final Chapter” of Arkham City and it stars none other than everyone’s favorite villainous sidekick Miss Harleen Quinzel better know as the Joker’s mischievous right hand Harley Quinn. This new DLC titled Harley Quinn’s Revenge will be released on May 29

is also the same day that Rocksteady and WBIE will be releasing Batman: Arkham City Game of the Year Edition. There’s a lot going on in Arkham so just leave it to me to get you up to speed. 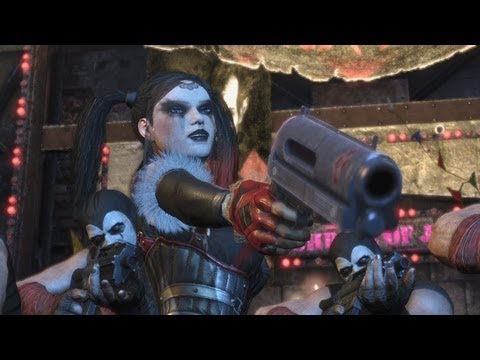 Not many details have been released about Miss Quinn’s revenge but there are some conclusions we can draw from the trailer. First of all, Harley is pissed. No doubt due to the events that unfold at the end of Arkham City’s story. I’ll spare you the details just in case you haven’t played it. Let’s just say that Harley obviously has a grudge against dear old Bats and she’s concocted quite the little scheme to exact her malice. From the trailer we can gather that she has tasked some of her thugs to kidnap a few of Gotham City’s finest in order to entice Batman to return to Arkham City’s Steel Mill where she has a surprise in store for the Dark Knight. The Trailer then goes on to show Robin making his way to Arkham City guided by Oracle who says Batman has been missing for two days. Look’s like it up to the boy wonder to save Batman from Harley’s twisted scheme. That seems to be all we know so far so let the speculation begin.

Robin in the Spotlight.

If you’ve played thorough Arkham City you’ll know that Robin does show up at some point during the main story but isn’t playable during the main game instead he’s relegated to Challenge maps much like Nightwing. I’ve played some of the Nightwing challenge maps and while it was neat to beat on thugs as a character other than Batman what I really wanted to do was explore Arkham City through the eyes of another hero, something that you are only allowed to do as Batman or Catwomen. It is entirely possible  that this DLC will allow for just that or perhaps playing as Robin will only be possible in and around the Steel Mill, which I sure hope is not the case. There may also be some new Riddler puzzles that need solving and possibly some new gadgets, because there’s certainly not enough of either of those. Regardless, I’m really excited about this new piece of DLC which I’m sure will be an excellent addition to an already excellent game.

Finally for those of you who haven’t played Batman: Arkham City yet I have two things. First, where the hell have you been? And second, you’re lucky. On May 29

if you don’t already own Arkham City you can opt to pick up the Game of the Year edition which will feature a myriad of bat-goodies. Rocksteady has announced that the GOTY edition will come with all the DLC already released including the Catwoman day one DLC and subsequent Nightwing and Robin challenge packs. As well as the Batman Skins Pack and of course the all-new Harley Quinn’s Revenge. As an added bonus the GOTY edition also comes with a download code for the Batman: Year One animated feature film. Hell this edition has more content the Riddler has condescending one liners. I wouldn’t be surprised to see more than a few gamers who already own Arkham City pick up a copy of this awesome package. Last but not least, if you’re a hardcore bat-fanatic you can also check out the Batman Arkham: City End Game digital comic that came out earlier this week. It’s supposed to fill in the gaps between the end of Arkham City and Harley Quinn’s Revenge. The first issue is available right now on the DC Comics app and is written by Derek Fridolfs and features art by Jason Shawn Alexander. I tell ya, right now is a great time to be a fan of the world greatest detective.

At night the Riddler still taunts Tim in his dreams.