Why You Should be Excited for Yooka-Laylee 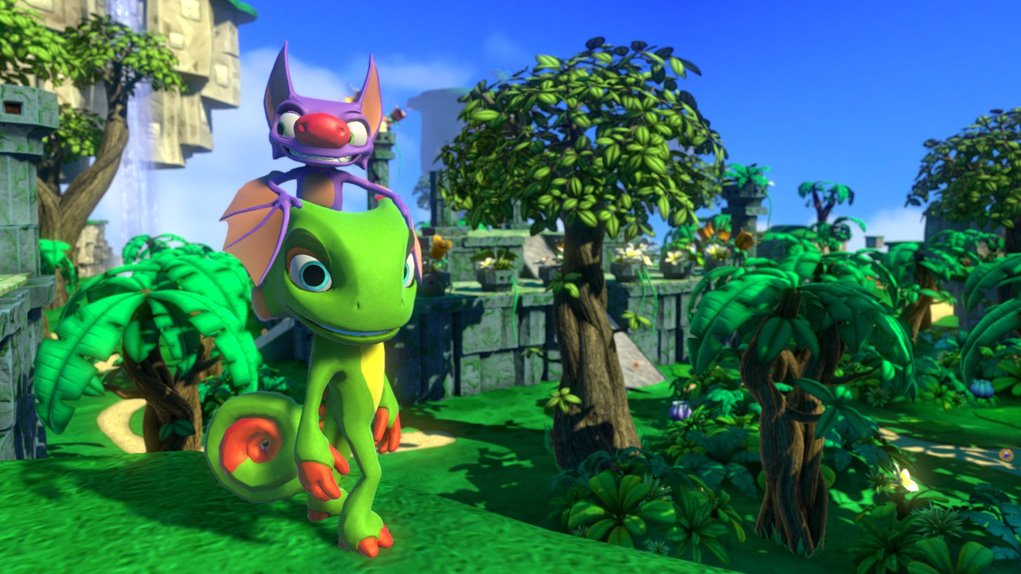 By now, you’ve probably heard about Yooka-Laylee, the spiritual successor of Banjo Kazooie. But if you’re that one person who doesn’t know what I’m talking about, replace Banjo with a lizard and Kazooie with a bat and you have the new game’s premise.  Playtonic Games (a studio comprised mostly of old Rare Ware talent) is developing it, and creators of the Nintendo 64 series are at the helm. Hell, even David Wise (the man behind the Donkey Kong Country soundtrack) is working on the score.  This is a big deal. It isn’t hard to see why the Internet is going bananas for this game.
The first and most obvious reason is the Internet is a cesspool of nostalgia.  Regardless of what it is, after a certain point, everyone looks back on old media pretty fondly. It doesn’t hurt that both Banjo Kazooie games are fantastic.  These are games that pushed the N64 to its limit, while in the process created two characters that proved 3D platformers worked. If Mario 64 didn’t succeed, it would have taken a lot longer for games to go 3D, and it would have taken even longer to prove that the adventure/platformer genre could work too. But the supporting cast of games like Conker’s Bad Fur Day, Banjo Kazooie and to a lesser extent Rayman solidified this type of game as something worth playing.

But for one reason or another, as time wore on, the 3D platformer sort of fell into obscurity. Aside from the main Mario instalments, there really aren’t a lot of games that want you to run jump and collect. Rare tried two times to bring back the series, but they couldn’t capture the magic they once had. With the bear and the bird, the developer just released something mediocre with Banjo Kazooie: Nuts and Bolts. The hub worlds felt empty, the flamboyant characters fell flat and everything just felt manufactured. A lot of that had to do with the loss of talent. The Rare of today is not the Rare of the 90s and the quality of the beloved franchises like Banjo Kazooie, Conker, and Perfect Dark were clearly not up to snuff. The other bit of blame falls on Microsoft. Having a big company breathing down the necks of the developers probably didn’t help things either. There was too much focus on that good old nostalgia pop of seeing a character we loved revamped in HD instead of unique experiences that made the franchises great in the first place.
Which is why there should be excitement for Yooka-Laylee. The talent is there, the idea is eerily similar, but the nostalgia is taking a back seat to the ideas that made their IPs great all those years ago. Yes, there are plans for a 64-bit mode, but that won’t affect the core mechanics, it’s just a nice touch. The idea is to capture what those old games did well and update those ideas to fit in the modern landscape.  And considering the genre has gone mostly ignored, it could be refreshing. Playtonic Games doesn’t have a company backing the game. Fans are paying for this with Kickstarter. They can make the game they want, not manufacture an experience for a few suits.

If this gets funded, which I have no doubt it will, Playtonic has the team and the potential to recreate that feeling of popping in that old Banjo Kazooie cartridge in all those years ago. With no one holding them back except themselves, the team that made us love videogames as children can do it all over again.