Menat is the Next Street Fighter V DLC Character

Street Fighter V‘s DLC has been hit or miss. Some characters have been immediately welcomed, like Akuma, while some needed a warm-up period, like the strange and burly Abigail. Most people would agree that the latest DLC character will have a far shorter wary period, since she isn’t a giant man with tires on his arms. No, this time it’s a fortune teller named Menat, and she’ll be available to download on August 29th. 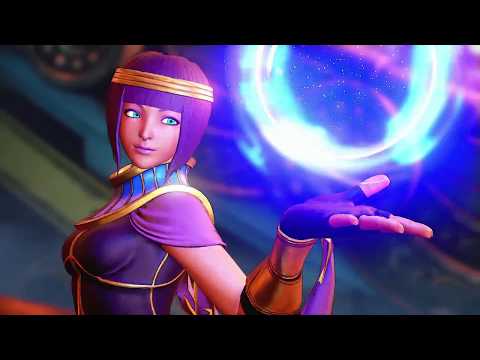 Menat is a completely new character to the Street Fighter universe, unless you count her cameo during Ed’s story mode as a full reveal. Her attacks are comparable to “puppet” characters in other games, especially Venom from Guilty Gear, who could set up pool balls around the stage and strike them with a cue to bounce around. Menat instead uses her crystal ball, placing it behind the enemy and performing attacks that can be hard to block from both sides. In fighting game parlance, this is called a “mixup”, and is essential to breaking through the defenses of the opposing player.

Menat’s inclusion isn’t a surprise to those paying attention, however. A leak that came out a few months ago revealed all of this season’s DLC characters with complete accuracy by a NeoGAF user called Ryce. Ryce has revealed many other Capcom fighter rosters in the past, including Ultimate Marvel vs Capcom 3‘s new characters. According to his claim, the last season 2 character will be Zeku, the martial arts master of Final Fight‘s Guy.

Menat will be available for purchase at the same time as four new Street Fighter 30th Anniversary costumes for Guile, Bison, Ibuki, and Karin, as well as two other costumes for Menat called Story and Battle costumes. Menat can be purchased in the season 2 character bundle for 37.44 CAD, or separately with in-game fight money.