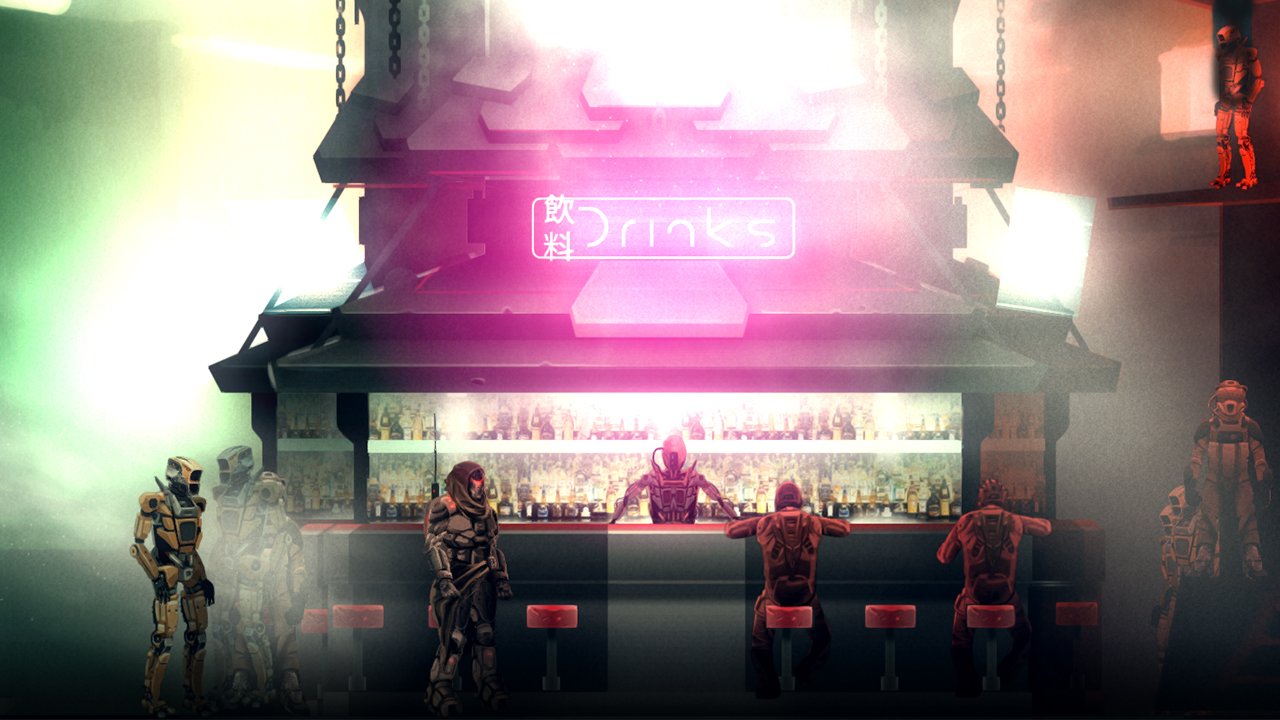 Kova looks to take players to distant worlds; hunting for materials, prey, and ancient technology. It’s not exactly uncharted sci-fi territory to have a mercenary ship break down on a planet filled with powerful lost science, but Kova’s sharp art, involved gunplay, and on-the-fly crafting mechanics hope to add some creativity into the mix.

The gloomy, cold planet where players begin makes for a good starting point for Kova, showing off its use of various planes to create a sense of depth on its distant planets. Sidescrollers often play around with moving backgrounds to create that feeling of depth, but Kova takes that extra step and includes objects in the foreground, having icy hills, snow-covered trees, and shadowy beasts wandering in front of the action.

Yes, those foreground objects and creatures can get in the way during exploration at time, but they make the world feel more lush and full, as if the player is peering through cover to witness action happening a few feet away. It’s a nice effect that gives the first planet a bigger feeling of scope and size that a regular 2D plane and some background objects might not be able to accomplish.

The visuals are quite nice, as well. Title character Kova has a lot of details to her armour, almost to the point of making her look completely robotic, but a cloak is draped over her to give her a human touch. It’s a simple touch, but it makes her character stand out from similar, mechanical-looking heroes from other games. The game’s backgrounds show similar detail, with lush trees drooping with snow or strange, shining obelisks looming nearby.

Still, there’s little time to look around, as Kova’s suit runs out of energy quickly. Jumping, running, or doing anything drains the power from her mechanical body in a hurry, and once the suit is drained, it starts to chew up her health in a hurry. This means players will need to constantly monitor the suit’s health (conveniently placed in the lower left) and make sure they aren’t jumping around willy-nilly as they play.

Recharging is simple, using the game’s crafting system. Players can bust open various rocks and ores on their path, picking up drops of titanium, plutonium, and other things, and then refining those harvested items into suit energy, ammo, or health. Players can also do this by simply holding the d-pad in a given direction for a few seconds, making it easy to turn those collectibles into the right thing in seconds.

This harvesting and refining system is an interesting touch that gives the game’s play some personality, but it is a bit of a nuisance in this early build. Having the player collect health packs and ammo pickups would save some effort, rather than have them collect ores and turn them into something else. Still, it doesn’t make sense to just have laser ammo and health kits lying on uncharted planets, so as far as the story and setting go, it’s a smart decision. It’s also a very small irritation, really, and given that there will likely be more things to craft in the future, it’s not likely to stay annoying.

Collecting ore isn’t all players will be doing as they move deeper into the frozen planet. The forest path soon gives way to a deep cave, one that contains small creatures with jagged teeth that don’t care for Kova’s appearance. This gives players an excuse to use her gun, which is a bit more involved than pointing her in the right direction and spamming the fire button.

In Kova, players can aim the gun all around, taking shots at things in all directions. It makes the action a bit more involved, as the creatures were attacking on an uneven plane, which meant having to make minor adjustments in aim often. The game was generous with its hit boxes, though, making up for some of the learning curve of getting the aim down right.

This more involved form of 2D gunplay made for fun shootouts, even if there weren’t many. Being able to aim, as well as build yourself a health kit on the fly while having to watch your suit’s power levels, could make for some intricate fights. This build didn’t push the player that hard, though, and while enemies took many hits, they weren’t able to fight back when attacked aggressively. More intelligent enemies in later builds will hopefully make for more challenging fights.

Kova is coming together well, offering some striking artwork and interesting use of foreground art to give its planets depth, while also having an involved combat system and some handy crafting tools. It’s still early on in development, but this first glance shows the developers are on-track to possibly make an entertaining sidescrolling galactic adventure.