Another week, another set of challenges in Fortnite and this week is no exception. Players looking for some help finding some rather elusive and more importantly, lucrative gnomes, can refer below for a quick and easy guide to mastering the art of gnome-napping.

Unlike previous instances in which gnomes were available for players to find, this week’s latest refresh has brought with it extra stealthily hidden garden protectors that also happen to be extra hungry. Luckily, hungry gnomes within the world of Fortnite tend to be especailly talkative, spouting, “yummy, yummy, yummy” when players are nearby, making it an easy audio-cue for players to be aware of when hunting.

So, the question is where are we landing? well, by starting with Greasey Grove, players can make their way to the basement of the diner after they land on the roof, the gnome itself will be hiding in one of the corners by a large barrel.

From Greasy Groves, players should check out the taco stand southish of Shifty Shafts, a gnome will be hiding by the huge chair. The hunt continues and the next gnome can be near Lucky Landing, specifically near the south side of the diner, inside the fridge.

Pleasent Park also happens to have its very own resident gnome, players on the prowl can find the little guy inside the gas station, opposite the vending machine. Next up, Retail Row. Retail Row happens to have two gnomes, one of which can be found inside the supermarket’s north end, near the top of the building. The second Retail Row gnome can be found near the South gas station, hidden behind one of the counters.

Risky Reels houses one gnome, players can find it by looking behind the fast food counters of the West side. From here, players should go to Salty Springs, where a gnome can be found resting in the gas station in the corner of the north-east side.

Speaking of Tilted Towers, a gnome can be found near a dumpster right smack dab in the middle of the popular landing zone. Finally, the last gnome for this week can be found in Tomato Town, hiding in a sink within the large tomato building.

To make things easier, a video from popular Youtube user HarryNinetyFour has been attached below to give readers some visual aid in hunting down the Fortnite interlopers. 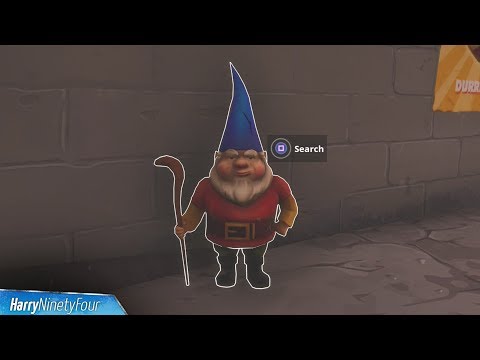