Resident Evil released 20 years ago to the date and changed the way  people think about games by popularizing a whole new genre, Survival Horror.

The pre-rendered halls of the Spencer Estate haunted players as they hunted through narrow corridors looking for the next key or the way out to safety. It’s a franchise that wormed its way into the hearts of millions around the world. It has enjoyed a rich golden era, seen a rebirth and managed to survive during some very trying times; I’m looking at you RE6.

My first experience was the 2002 REmake of the original PS1 entry. I hunkered down in front of my tube TV with the friend that brought it over. We struggled in vain to slay the first zombie with a knife as Chris Redfield, not learning our lesson as we backed up all the way to the kitchen door.

I had never experienced anything like Resident Evil before I popped the disc in my Gamecube all those years ago. That first zombie scene was seared into my young mind and I just couldn’t give up on the game. I finally beat it years later and by then I already had Zero under my belt.

I became obsessed with the franchise over the years, I absorbed every note in the games, and I followed the lore trying to learn as much as possible. While the plots are laughable, there was something about this unabashedly charming series that just sucked me in. It embraced its cheesy storyline and was damn proud of itself. It’s impossible not to crack a smile at some of the more ridiculous moments in the series, such as Wesker getting nailed by a bundle of I-beams. But you can’t help but feel a sudden pang of fear as you hear a Hunter crash a door down as it searches for you.

With Umbrella Corps on the horizon, details about Resident Evil 2’s remake somewhere in the distance (hopefully E3) and RE4, 5 and 6 coming to current generation consoles, there are definitely many reasons to still be excited about this long-running franchise.

In celebration of the 20

anniversary, Capcom will release developer commentaries throughout the year where key members will discuss their time working on and developing key titles. The first one involves Hiroyuki Kobayashi, who worked on Resident Evil since the first title, you can watch the video here, just be sure to click that CC button for the subtitles. 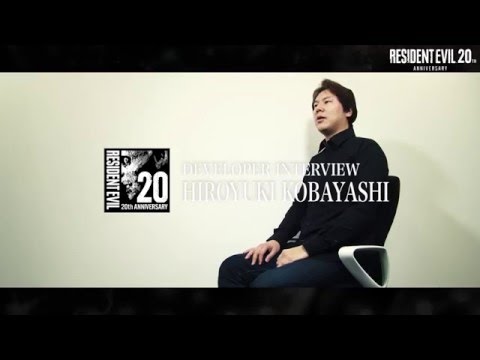 Capcom also promises to roll out some exciting surprises as the year continues so fans can definitely look forward to what’s in store.