The Crysis Trilogy We Deserve and Need 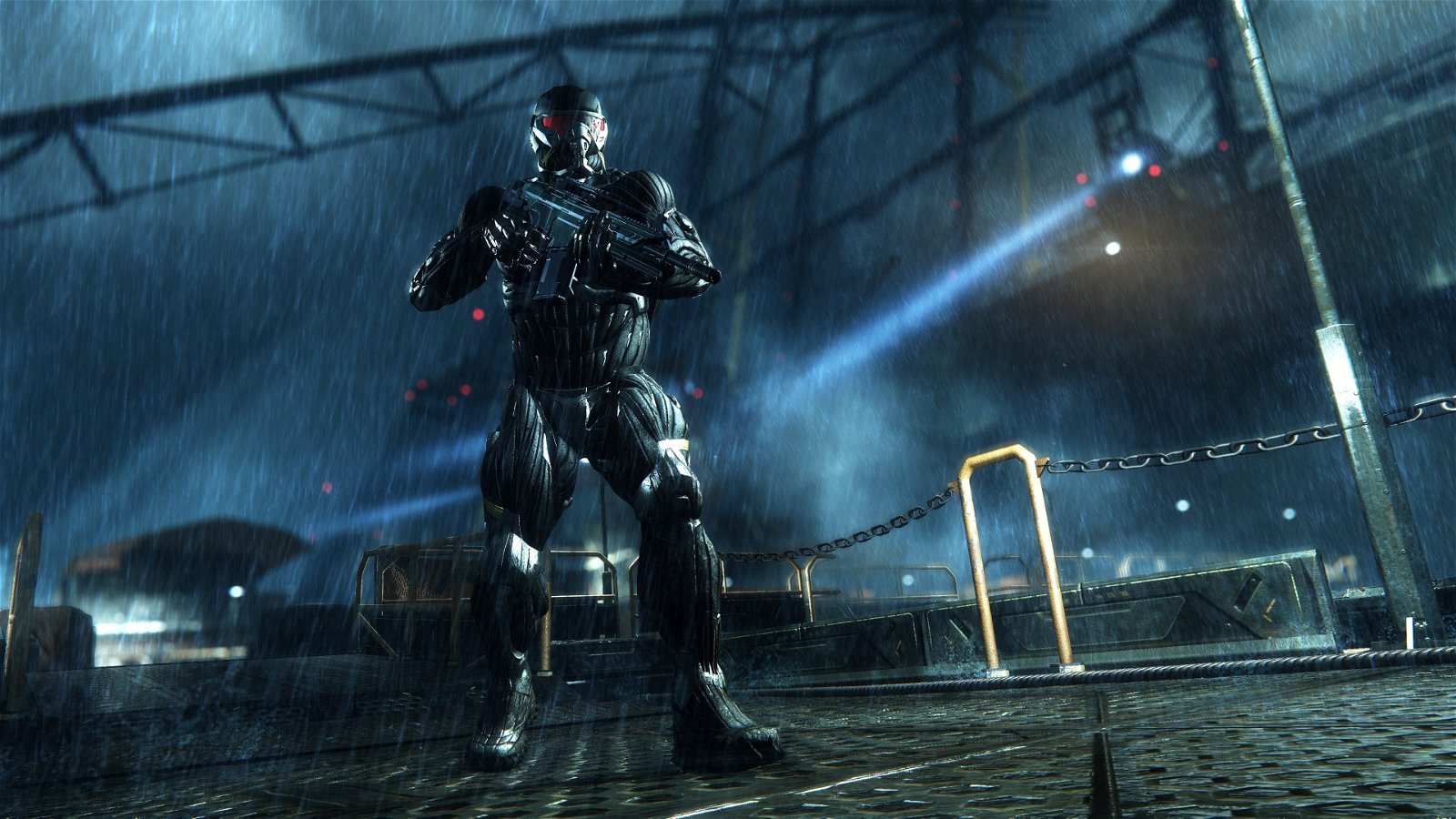 With the 2021 “Fall-pocalypse of Games” now officially upon us, there’s a strong possibility that many gamers have completely forgotten that that one of the most iconic first-person shooter sagas of our time has finally arrived on last and current gen consoles as well as PCs in the revitalized form of Crysis Remastered Trilogy. Shooter fans under the age of twenty are likely shrugging their shoulders as they read this, and some might even be asking themselves “What is Crysis?”

Naturally, I cannot let this stand. You can bet such blissful ignorance largely doesn’t exist on PC, where the quintessential meme “But Can It Run Crysis?” remains part of PC Rig-building culture. But on consoles, where stellar games are regularly drowned out by the annualized release of the next Call of Duty and the bi-annual re-invention of Battlefield, it’s much easier for culturally significant games like Crysis to slip through the cracks.

As a middle-aged, hardcore console gamer, it’s my duty to make sure this series doesn’t go ignored, and if you’re a first-person shooter fan who has yet to play Crysis, I’ve got Six Reasons Why The Release of Crysis Remastered Trilogy on Console Should Matter to You.

Let’s start with the obvious, Crysis Remastered Trilogy is the first time that the complete, mainline trilogy (excluding the 2008 spin-off, Crysis: Warhead) has been available on all current platforms including that of Nintendo (i.e., Switch). In July 2020, the Switch was the first of the 8th Gen consoles to receive the standalone release of Crysis Remastered, which in turn was based on the previous generation’s Xbox 360 and PS3 port of Crysis, rather than the original PC version. The Xbox One and PS4 versions of the Switch remaster followed in September of that same year, and are now playable with additional, next-gen powered enhancements on PlayStation 5 and Xbox Series consoles via backwards compatibility.

With today’s release of Crysis Remastered Trilogy on all current consoles as well as PC, Crysis Remastered is now joined by similarly enhanced ports of Crysis 2 and Crysis 3 to complete the set, and all three games are now available to be bought separately and/or purchased in a bundle, depending on platform. Unlike the first remaster, however, the remastered ports of Crysis 2 and 3 are based on the code of the original 2007 PC version (except the Nintendo Switch versions, which are still based off the “PS360” ports).

Regardless of the source code, however, these newly remastered console versions are still a HUGE step up from what we were given on Xbox 360 and PS3 in terms of visuals and performance, making it almost impossible to go back to the 7th Gen versions once you’ve played them. And to reiterate, you can now play all three remastered games on the same platform, even on Switch.

2) Reclaim all those glorious frames

Circa 2011, the Xbox 360 and PS3 still represented the pinnacle of console gaming, but in the realm of PCs they were effectively the equivalent of extremely low-end gaming rigs at best when running unoptimized software. Several graphical, performance and content sacrifices (including the removal of an entire level) had to be made in order for Crysis to even run on those consoles, and framerate was by far one of the most noticeable compromises when it launched, with both console versions regularly dipping as low as 16fps during heavy action scenes.

In 2013, both Crysis 2—which actually launched on both consoles several months earlier than the original game—and Crysis 3 turned in more impressive visuals from an artistic standpoint, but their resolutions were extremely muddy, and their framerates fared just as poorly as the console edition of the original Crysis, if not worse.

Well, it’s taken a couple of generations to remedy, but Crysis Remastered Trilogy finally democratizes the framerate of the Crysis games on current gen consoles, granting 60fps performance across Xbox Series X|S and PS5. Meanwhile, last gen’s base and enhanced consoles (Xbox One S, Xbox One X, PS4, PS4 Pro and Nintendo Switch) are capped at a locked 30fps, with the one exception of a 60fps Performance Mode for the Xbox One X version of Crysis Remastered. Whether playing at 60fps or 30fps, Crysis Remastered Trilogy’s framerates are far more performant than the dog’s breakfast that the Crysis games were on PS3 and Xbox 360, promising a much smoother, more responsive and enjoyable gameplay experience.

3) This isn’t your father’s mid-life Crysis

Despite Crysis Remastered Trilogy being based off the previously mentioned mix of 7th gen console and original PC version code, this trilogy isn’t a simple, repackaged port. Developer Crytek and support studio Sabre Interactive have painstakingly added improvements and new features to bring these games more in line with the graphical fidelity of today’s games.

This includes global illumination, real-time reflections, ray-tracing (in non-Switch, Crysis Remastered versions only), higher quality textures, enhanced explosion effects and improved depth of field. In many ways, playing Crysis Remastered looks and feels as if it were a brand-new game that was released today, except this time it won’t melt your PC or console’s graphic card.

Each game in the Crysis Trilogy has featured a different protagonist, Nomad, Alcatraz, and Prophet. The real star of the franchise, though, is the Nanosuit that they wear and the superhuman feats it makes them capable of, not only as a force of destruction but also as a silent and deadly hunter.

Even more interesting though is the mysterious connection that the Nanosuit shares with the Ceph, the invading alien force that our heroes must battle against in addition to other human threats, as well as the connection between the three protagonists themselves, which players will soon learn isn’t quite as straightforward as three different dudes donning a futuristic suit of armor for a few hours and kicking alien ass. Let’s just say that the Nanosuit demands…commitment. I implore you to play through the trilogy yourself and find out just how much.

5) Ascension for (almost) everyone

The second last mission in the original PC version of Crysis, titled “Ascension,” is a flight vehicle-based shooting level that was cut from the Xbox and PS3 ports of the game (likely due to hardware limitations at the time). It’s an exciting, action-packed mission in which the player (as Nomad) pilots a heavily-armed MV-24 VTOL to provide fire cover for his fellow Marines as they attempt to evacuate the Lingshan Islands before the alien Ceph overtake them completely.

Crysis Remastered, which as mentioned before was based off the original “PS360” versions of Crysis, initially inherited their lack of this level as well. Thankfully however, the omission was eventually remedied for all console versions (excluding Switch) following a major patch update for the remaster that arrived seven months after Crysis Remastered’s September 2020 launch. This resulted in a better game experience and much improved continuity now that the level has been restored. At long last, gamers can enjoy the complete Crysis experience on console.

6) No Seriously, even your work PC, tablet, smartphone and PS Vita can all run Crysis now

The caveat here is that you still need a network or internet connection plus a capable PC or game console running a copy of Crysis Remastered Trilogy to stream your gameplay from, but yes, Microsoft, Sony and Steam (Valve) all offer free services that enable owners to remotely stream their games from their console or PC to other devices, those services of course being xCloud, PlayStation Remote play and Steam Remote Play, respectively.  So yes, even your beloved PS Vita can run Crysis now, sorta. Do you really need it to? Not really. Should you try it out anyway? ABSOLUTELY.

Anyway, I’ve said my piece, youngsters. Now go out there and make and make catchphrases like “Maximum Armor,” “Cloak Engaged” and “Can it Run Crysis” part of the first-person-shooter lexicon on consoles once again.