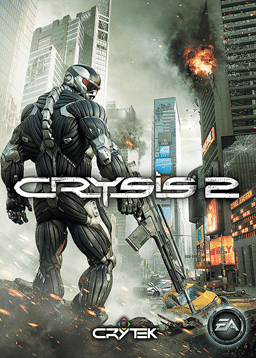 A few months back a friend of mine went on a date.

She described a perfectly pleasant date. They went to a nice resturant, the atmosphere was alright, and there were no embarrassing gaffes on either side. But the real problem soon came out. He was described as “very pretty” but little else. It wasn’t that he was stupid, either. He just had nothing interesting to say. But boy could she just look at him all day.

And it is pretty. Terribly pretty. Let’s get this out of the way: This is a pretty game. Nobody can dispute how well rendered its destruction is. The game takes place in modern day New York, and walking around in the sunlight, there’s a beauty to everything. Watch as the wind whips up some newspapers and throws them around. Observe the way the tree’s limbs gently sway in the wind. Alas, soon you’ll have to start shooting people in the face.

You have to shoot people in the face because you’re a hardened marine sent to New York City to help evacuation efforts after an alien disease/invasion  has made the Big Apple into a war zone. (Though it’s still probably better than it was in the 70s). Soon after a botched beach insertion , you’re given a suit of super armour  and tasked with stopping the invasion , while contending with mercs who are also out to stop you .

The nanosuit super armour conceit gives the game flexibility. The suit allows for superhuman feats of strength and speed, but all these abilities drain its limited battery. Standing still or being otherwise unremarkable recharges the suit. The suit’s primary uses are stealth and armour mode. Stealth mode’s merits are obvious but shouldn’t be undervalued. With the simple press of a trigger, you become invisible to the world, until the battery runs out or you decide to open fire. The game’s AI attacks and swarms your last known location preventing slow drawn out battles. The draining battery enforces a swift, methodical style which fits perfectly with the open stages.

If you’re looking for something a bit more blunt and brutal, there’s armour mode. Play as a tank and brute force your way through the game. Bullets drain the battery instead of health. Health is also recharged by the suit. As long as you’re not getting shot, you’ll heal up.

Both modes are equally enjoyable. The maps are large enough to allow both styles of play, and usually within the same space. Cars and barricades litter the landscape, along with plenty of nooks and cranny. The game allows for cover-based gameplay, but it’s much more engaging to turn the landscape against the enemy, and making the most of your nanosuit. Likewise, the different enemies, both alien and human, can be approached head on or stealthy, and also attack different, encouraging even more variations in play style.

Some small tactical decisions are left up to you, but, for the most part, the game is terribly linear and rigid. Every step of the way, you’re told what to do, even when some of the set pieces demand to be explored. The game’s tactical assessment mode, accessed with the simple press of a button, makes things even clearer, highlighting places of interest. Oh, I can snipe from that window three floors up, eh? Thanks for the tip. If something interesting is happening the game asks you to tap triangle and watch, instead of letting you decide what you should be looking at.

The multiplayer, too, is derivative, stealing the best pages of the Call of Duty playbook. Play a few rounds, get experience, level up, get new abilities. The only new wrinkle is that the suit upgrades as well based on how often its used. The standard deathmatch, capture the flag, domination are here, but on this well trodden ground, the game’s possibilities really come out here. The ebb and flow of the game relies on how well you can balance your suit’s power, and how well you know the spaces. Likewise, jumping high and running fast drain juice. The stealth mode eliminates most of the rewards of camping, and risks turning you into a sitting duck. The game is fast and active. There’s a lot of satisfaction running full speed, sliding under a tractor trailer, jumping over it, and popping off a headshot. It’s not as tightly structured as the rest of the game. By allowing its wide open arenas to be just that, instead of set pieces that usher you from one bland plot point to another, a bit of fun enters into things. We are no longer bound by what the developer wants; we can play.

There’s nothing new here, but you will enjoy the time you put in. The story is what it is. It gets you from point A to point B and emotionally flat lines. I’m hard pressed to care about the events as they happened and even in retrospect, the entire game seems like a seven hour shaggy dog story. The game admits this itself. During cutscenes an intrusive prompt asks you to press X to get back into the game. Cut the filler. Who needs it? Stuff happens, then more stuff happens, the end.

It all stems from the larger issue of the game’s blandness. It takes all these parts from other games and blends them into a fine gruel. The game takes place in New York City, one of the most vibrant and distinct cities in the world and manages to make it a series of torn up roads, bland high rises, and military blockades. It pillages the multiplayer from Call of Duty. Even the score is by Hans Zimmer, the king of generic Big Heroic Music (who also helped score Modern Warfare 2). In theory, this should make it the best game ever, but instead strips the game of any risk, any personality. It just exists.

And what of my friend? A few more dates, but nothing panned out. She had seen everything there was to see.

And it is pretty. Terribly pretty. Let's get this out of the way: This is a pretty game. Nobody can dispute how well rendered its destruction is.
REVIEW SCORE
6
File Under: Crysis, Crytek, PlayStation, Shooter