With the anticipated upcoming release of Jurassic World: Fallen Kingdom, Psyonix is bringing some of the excitement to Rocket League with a new DLC package.

This package will include the Jurassic Jeep® Wrangler Battle-Car, outfitted with some of the most iconic imagery from the movie, available in both blue and orange skins. Some other features are a New T-Rex inspired Goal Explosion, a Hard Hat Topper, some great new Jurassic Park, Jurassic World, and Mr. DNA player banners, and InGen Flags.

You can check out some of the new features in the trailer below: 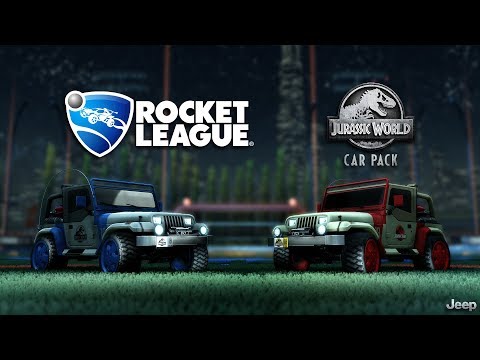 Rocket League is crossover of high action vehicular mayhem and soccer. with a player community of over 45 million players and almost limitless customization. Rocket League has had a history of franchise crossovers with DLC Battle-Cars that include items from iconic movies and toys such as Fast and the Furious, Back To The Future, DC Super Heroes, and Hot Wheels®. Who doesn’t love the idea of going head-to-head against a DeLorean time machine with your Jurassic World: Fallen Kingdom Jeep® Wrangler?

The DLC will be arriving a few days before the release of Jurassic World: Fallen Kingdom in theaters on June 22nd.

At $1.99 USD this package will be everything a Jurassic World Rocket League fan will need to keep the action going.

Liked this article and want to read more like it? Check out Bryan Calhoun’s review of Rocket League for the Nintendo Switch!