After months of teasers, ABC finally revealed the hot official look for Ghost Rider in the fourth season of Marvel’s Agents of S.H.I.E.L.D. The Spirit of Vengeance himself stands before a fiery 1969 Dodge Charger. 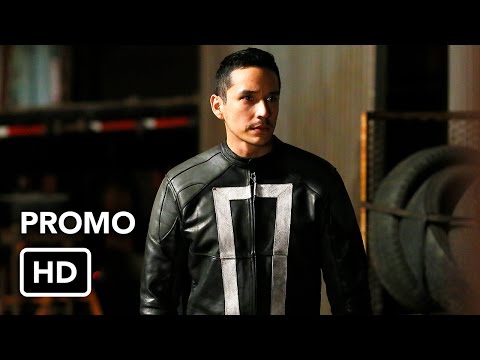 Executive producer Jeff Bell said this new character “opens up a whole different kind of storytelling for us.”

Considering Marvel’s Agents of S.H.I.E.L.D’s new, later timeslot at 10 p.m., we can expect that Ghost Rider’s introduction will cause the show to take a darker tone expected of the vengeance-focused antihero.

Without further ado, here is Robbie Reyes fully enflamed in front of his iconic ride, from Yahoo’s first look.

Played by Gabriel Luna (Matador, True Detective), Robbie Reyes was born from the appropriately named All-New Ghost Rider series released in 2014.  This character is possessed by a Spirit of Vengeance different than the one that plagues the more recognizable rendition Johnny Blaze, portrayed by Nicholas Cage in the 2007 and 2012 movie adaptions of the comics.

In the comic books, Robbie Reyes works as a mechanic in East L.A. to support his mother and developmentally disabled brother. After a street race gone wrong, the Mexican American teen finds himself supposedly possessed by a Spirit of Vengeance. Ghost Rider Reyes is originally only interested in using his new-found demonic powers to win races, but eventually must come to a compromise with his blood-thirsty spirit passenger.

“We decided to go with the Robbie Reyes version of the character because he’s a newer comic, and also it would be interesting to bring in someone with that background into our dynamic of the show … We’re staying true to his circumstance. But as always with any property that we use, we’re taking our liberties with it,” said executive producer Maurissa Tancharoen.

We do know Robbie Reyes’ brother, Gabe, has been cast for Agents of S.H.I.E.L.D, but we’ll have to wait and see how large a role he and his superhero brother play in season four.