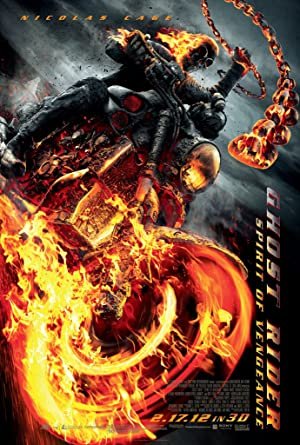 The Crank movies are by far the best and most insane action movies to emerge out of the 2000s. Co-writers/directors Mark Neveldine and Brian Taylor managed to heighten action movie clichés and excesses to an extent that their franchise felt like the action equivalent of Sam Raimi’s Evil Dead series, winking parodies that still delivered everything required from the genre, just in a package that turned them into cartoon comedies.

The concept of marrying that team with Hollywood’s greatest over-actor and the Ghost Rider franchise seemed like a match made in heaven. Sadly, Ghost Rider: Spirit Of Vengeance isn’t quite the gloriously batshit comic book masterpiece it had the potential to be on paper. It’s still a massive improvement on the original film and worth seeing, but unfortunately Neveldine and Taylor were tied down with a pretty conventional script that they were only able to embellish with crazy flourishes rather than command with their uniquely warped vision.

The movie is about…well that’s the problem. It’s a collection of semi-thought out ideas stretched into three acts. Nicolas Cage’s Johnny Blaze is now wondering Eastern Europe for reasons best known to himself. Somehow he ends up running into a hot single mother with a 12-year-old boy who just happens to be the son of Satan. Since Johnny Boy sold his soul a while back, he’s drawn to the kid, but also wants to protect him since Satan is kicking around Eastern Europe (of course he is) trying to track down his boy and kick off that whole Armageddon plan he’s been working on. At the same time Blaze has befriended a French guy who knows some monks capable of curing his flaming skull curse. Yaddayaddayadda, things go wrong and Ghost Rider fights the devil. Why the hell not?

The big problem facing any filmmakers taking on Ghost Rider is that while the character and imagery are iconic, it’s not like this guy is Batman or Spiderman. Those characters infiltrated pop culture to such an extent that their stories essentially became the mythology of the 20th Century. Everyone knows them and are anxious to see them on a big screen. Much like other B-level Marvel stock characters like The Punisher or Blade, Ghost Rider provides a great protagonist for T-shirts and action figures, but no compelling story to tell. So, studios just hire a bunch of hack Hollywood writers to crank out something that resembles other superhero stories well enough that they can be sold to the public. Sadly by design, B-level Marvel characters can only ever get B-movies at best. Spirit Of Vengeance features a pair of directors perfectly suited to the material, so they get the style and tone right even if the story is ultimately little more than window dressing. So, the quality level is about the same as Guillermo Del Toro’s Blade 2 or Punisher: War Zone. Enough things work that it’s an entertaining romp and serves the character well, but this thing will never be confused with The Dark Knight.

Now, if you’re a Crank fan, you’ll be pleased to hear that the Neveldine/Taylor fingerprints are all over this thing. There are bad taste cut away gags involving flaming piss, insane stunt sequences where the cameramen were clearly thrown of the side of a mountain, a punk/heavy metal aesthetic with a relentless soundtrack, and a couple of moments of over-the-top Nicholas Cage insanity ready to be cut into youtube montages. Unfortunately these qualities all generally feel like asides. These guys clearly came into the project late with a release date looming and peppered as much of their style into the existing project as possible, while still being saddled with a lifeless screenplay and wooden lead actress that they didn’t have anything to do with. Yes, it’s great to watch Nic Cage rant while trying to hold Ghost Rider inside, but the scenes where he connects with the young boy feel like they are right out of a particularly crappy TV movie. There’s enough good stuff here to make it worth recommending, but those moments where it turns into Neveldine and Taylor’s Ghost Rider are so strong that you can’t help but wish they’d been allowed to take over the movie.

In the grand scheme of contemporary superhero movies, this sucker has nothing on the X-Men, Batman, or even Spiderman franchises, but it’s still a hell of a lot better than the pitiful Fantastic Four flicks or even the original Ghost Rider. As long as you go in with the low expectations the original film set, you’ll definitely be pleasantly surprised. There are far worse ways to kill 90 minutes. However, there is the potential for a totally off the wall and insane R-rate Ghost Rider movie with Nic Cage reaching levels of insanity he’d only dreamed possible and the Crank directors ensuring that no bad taste booty shot, one-liner, or decapitation is left on the cutting room floor and this isn’t it. Maybe this flick will make enough money that they’ll be invited back with total freedom next time. But somehow I doubt it and this is as good a Ghost Rider movie as we’ll ever get. It’s a bit of a wasted opportunity, but still a perfectly serviceable and entertaining blockbuster. I guess it was silly to expect anything more from a Ghost Rider sequel, but damnit this could have been great. Let’s just hope Neveldine and Taylor became good enough friends with Nic Cage during shooting that he’ll show up as a villain in Crank 3. Now that would be a wild fucking ride.

The concept of marrying that team with Hollywoodâ€™s greatest over-actor and the Ghost Rider franchise seemed like a match made in heaven.
REVIEW SCORE
6
File Under: