As I kneel before an Orc warlord inside his fortress, a drake is dropping firebombs on the war zone outside. Three of my chieftains were killed in battle, and another just recruited before I took over the final checkpoint. This is it, my second down in as many minutes. The warlord swings his weapon, but his attack is cut short by my Orcish comrade knocks him upside the head, killing the brute before he could strike me. The battle is over, I put my controller down and exhale. This was the climax of Middle-earth: Shadow of War, the upcoming title from WB Games and Monolith Productions, and one of the best games on show at E3 2017.

There’s no denying that the title’s predecessor, Middle-earth: Shadow of Mordor, was strong in its own right – I just felt it was missing something. The truth is, all these years later, the best excuse I could come up with was developer Monolith tried to create a big experience cramped into a relatively small world, and some sacrifices were made. In the hour and a half I had with Middle-earth: Shadow of War, however, it seemed anything but small. 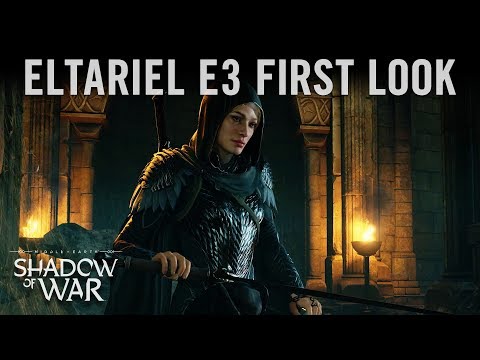 It was obvious from the promotional material that the developers want player to build their own personal story by taking on Orc leaders and building relationships (both friendly and antagonistic) with them. The Nemesis system has been completely updated to be bigger and more robust – something hard to really convey without experiencing it in person. Players recruit Orcish leaders, all of whom have unique personalities, strengths, weaknesses and battle bonuses. Recruiting the proper Orcs with the right abilities to match the leader of the fortress you want to take over. In my case, there was a brute ruler who is weak to explosions and ranged attacks, gets angry at frost, and has berserker abilities.

Before heading into battle, all of these factors were put into consideration. As stated above, player’s Orcish alies have varying battle abilities from bringing in certain beasts to different soldiers on the field. Picking the proper load out is essential for victory, though in terms of personal weaponry, players can change on the fly through the pause menu. Upon taking over a fortress, players can mix around their rankings to have an Orc command the post. Once that Orc is picked, the fortress starts to take shape in his image.

Before doing that though, players have a completely refined combat system to work with. While those who dabbled in Middle-earth: Shadow of Mordor will be able to jump back in with relative ease, but there’s even more to do in the battle department. To start, the fast travel ability has been reworked to allow players to call upon beasts (following a specific upgrade) if they’re too far away from their destination. But combat is where it gets much more interesting. Wraith abilities play a big role in of Middle-earth: Shadow of War, much like the previous title. In the ranged mode, players are able to grab enemies from afar, pull them towards protagonist Talion and down them to kill, drain, or interrogate. The ranged wraith attack also allows players to teleport directly next to an enemy to kill him, which gives way to a fluid motion to take out any players nearby. Along with that, a whole slew of new special combat execution attacks have been added, and a whole new ability to use similar options on ranged weapons.

Another big change is how different the upgrade system is this time around. Throughout the game, players pick up gems. These gems provide different upgrades to different aspects of Talion, much like the runes in the past. The big change is that the more players collect, the more they can merge them together to create more powerful augmentations, giving players even more choice. There are also a ton of new upgrades for melee, defence, stealth and everything in between. At first glance, it’s almost overwhelming, but it mostly reassures the notion that players can experience their own story the way they want.

The way beasts were handled also reaffirms this. The ability to ride beasts was a big draw for the previous title, and from the looks of it, there is a lot more this time around. To start, there is the ability to use and ride Drakes. Before starting a siege, if players have a beast master, they can choose from a plethora of creatures for support. If players choose the Drake they bring with them a fantastically powerful beast, but at a cost. The Drake doesn’t have an allegiance, and while they can do quite a bit of damage, they will hurt you and your troops. While they tend to be fickle, they can be broken if they take enough damage, then tamed. With a flamethrower ability, a lobbying fire bomb, and a physical attack that allows players to pick up enemies on the battle field and drop them from the air. Riding a Drake is a power trip to say the least. I also got to experience an elemental Graug. A base version of this was available in the Shadow of Mordor, but now they can have elements attached. The Graug I rode was was fiery, meaning it had similar attacks to a Drake, though players also get to experience the same brutal power that comes with this creature.

That experience was through a small minigame similar to a “kill frenzy” in the Grand Theft Auto, these types of experiences aren’t vital to the game, but they’re really satisfying and a good way to kill time, if a player chooses.

And that’s best way to describe my time in Middle-earth: Shadow of War – total freedom. Though my time with the game stretched to about an hour and a half, it was clear that Monolith Productions created an even better successor to a solid title. Though it wasn’t the complete finished product, there is a lot to be excited for with this sequel.