Players can choose different sections of the map, each of which have their own unique warlords, and strongholds. Players send their armies to each area to take them over. These strongholds are protected from a variety of defences, so some strategy is required. It appears that characters have a history and back-story, some of which carry grudges against the player for one reason or another.

There is no one set way to take over a fort. Players can choose a more stealth-based approach, or they can take a more straight-forward attack storming the gates with their Orc army. Interestingly enough, there are multiple types of Orcs within the army. Two that were showed off were a larger, brute berserker type, and a more stealth like spy. These characters forge their own story in a way with the newly improved “Nemesis System”. The Orcs in your army can create their own stories or rivalry, camaraderie, friendship and betrayal. Players can bring more Orcs to their army by frightening them then using the ring to control their minds. This is not unlike the Shadow of Mordor mechanic that allowed you to interrogate those who crossed you. 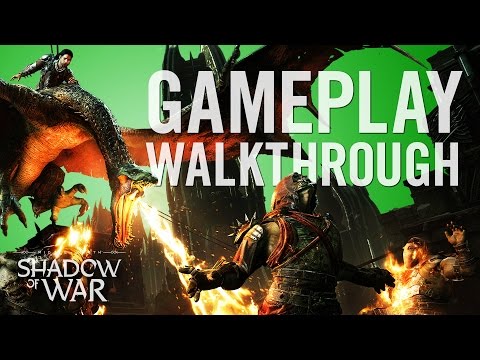 Beasts play a big part in Middle-earth: Shadow of War, mounting the proper animal can allow players to traverse dangerous terrain, like fire-grass. WB also showed off the new Drake in this title. Now players can take control of dragons, and fly in the air while lobbing balls of fire at the enemies below.

The video ends with a battle with the fort’s overlord. These play out like epic boss battles with hoards of enemies attacking while the overlord jumps in to try and land a few shots.

Middle-earth: Shadow of War seems to be a bigger sequel over the previous title, and if this gameplay reveal shows anything, it’s that it’s going to be more intense and gory than ever.

File Under: Shadow of Mordor