The console edition of Minecraft will be receiving a new gliding mini game in a free update releasing tomorrow.

The new mini-game has players equip an Elytra, an in-game piece of equipment that allows for gliding. The game features a “Time Attack Mode” where players can use thermal drafts and speed boosters to their advantage. There is also a “Score Attack Mode” where players earn points by flying through hoops. The mini game’s courses have built-in shortcuts for players to find and exploit in order to refine lap times. The Upcoming racing game supports solo and online play, as well as online leaderboards. The new update also increases lobby sizes and the number of players able to compete at once on consoles from eight to sixteen. 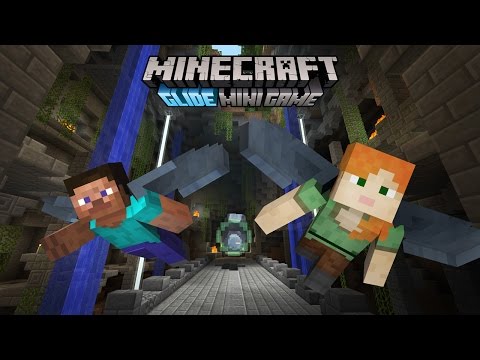 Minecraft’s new “Glide” mini-game will be the third mini game added to the title. The first is “Battle Mode”, placing players in one of seventeen different combat arenas where eight players fight to the death, finding equipment in scattered chests to use to their advantage. There are casual and competitive modes to the game that restrict the use of certain player skins that alter size. The second game is called Tumble. Players aim to knock blocks from under each other while trying to maintain their own footing.  The game comes in different modes, altering the platforms that players stand on.

Minecraft’s console ports have come a long way from their initially limited beginnings. While it’s still behind its PC counterpart, Minecraft console edition receives constant updates, adding content exclusives like the Fallout themed battle maps in February of this year. Mojang Studios already gave confirmation that the new Glide mini game will be receiving DLC packs that add new tracks, some of which will be offered for free. The first DLC pack the studio has hinted about for the new mode will be themed around various beasts, having players fly around monsters such as a giant Kraken.