Secret of Mana will be making a big return early next year with a newly announced remake.

Square Enix revealed that the company is currently developing a 3D remake of the classic SNES title, Secret of Mana. Besides being fully remade in high-definition 3D graphics with a newly arranged soundtrack, the game will now feature voice acting, added events and numerous improvements to the original’s gameplay systems. 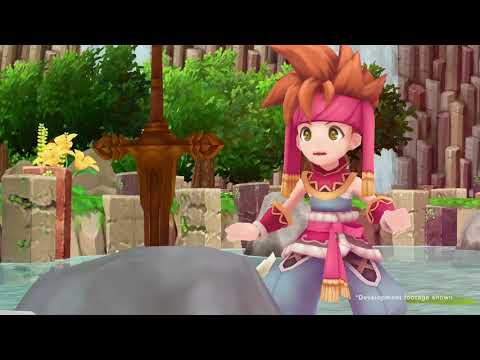 Originally released in 1993, Secret of Mana (known as Seiken Densetsu 2 in Japan) was developed by Square for the SNES. Secret of Mana is an action RPG which follows three heroes as they work together to prevent an empire from taking over the world. Since its release, the game has received universal acclaim for its innovative gameplay and well-done graphics. Square Enix released upgraded ports of Secret of Mana for IOS devices in 2010 and for Android devices in 2014.

Secret of Mana will now be the second entry in the Mana series to receive a 3D remake. The first game in the series, Final Fantasy Mystic Quest, was fully remade by Square Enix just last year. Re-titled Adventures of Mana, the game was fully remade for mobile devices. A PlayStation Vita version was also made, released exclusively in Japan. Plans for this game were made by Mana series producer Masaru Oyamada, who hopes that all of the Mana games will become playable on modern platforms to celebrate the series’ 25th anniversary.

The Secret of Mana remake will launch digitally worldwide on February 15, 2018 for PlayStation 4, PlayStation Vita and PC via Steam. In Japan, the game will receive a physical and digital release for the PlayStation 4 and PlayStation Vita versions. A collector’s edition will also be available in Japan, including a pop-up book, a CD of the remake’s new music tracks, and figures of the three main characters. There has been no mention of a western physical release.