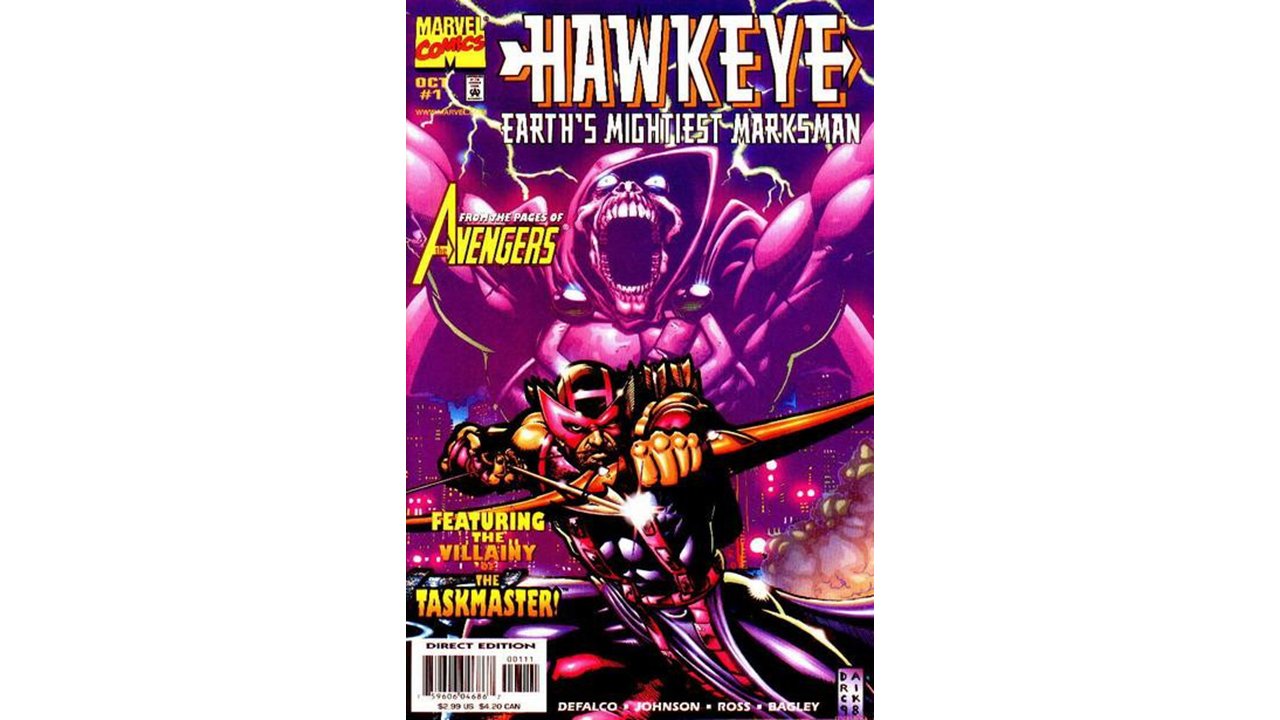 With the release of the Avengers movie just over two months away, Marvel Comics is ramping up their output of Avengers-related merchandise, with various new ongoing series, limited series, trade paperbacks and hardcover collections featuring the team being published.  This hardcover is a good example, as it manages to both follow-up on 2009’s Avengers: Hawkeye Premiere Hardcover, and provide additional exposure for Hawkeye, who’s soon going to be featured in the Avengers movie.  The first Hawkeye collection (which, incidentally, came out earlier this month in softcover for the first time) featured a more happy-go-lucky version of Hawkeye, and stands in stark contrast to how the character is portrayed in this collection.  Included in this hardcover is the Hawkeye four-issue limited series from 1994, a follow-up story originally published in Marvel Comics Presents #159-161, and the Hawkeye: Earth’s Mightiest Marksman one-shot from 1998.  The stories from 1994 tackle a very different version of the character, compared to most of his history, as it focuses on Hawkeye right after he resigned from the Avengers West Coast.  The primary reason given for Hawkeye’s decision to leave the team was that he was mourning the death of his wife, Mockingbird, and the lack of loyalty he felt from his teammates, especially after Mockingbird’s funeral was sparsely attended, by his so-called friends and teammates.

With that being said, the Hawkeye that readers first get a glimpse of in this collection is a dark one, as he has withdrawn completely from contact with civilization, let alone other superheroes, and has instead turned to living a life of subsistence as a hunter/gatherer.  However, his new idyllic lifestyle is suddenly turned upside down when he discovers a hidden base for the revived Secret Empire.  What starts out as a brief skirmish becomes a mini-vendetta, as Hawkeye picks up a sidekick in the form of Rover, a genetically engineered creature more wolf than man that he saves from the clutches of the Secret Empire, and their ruler Viper.  Hawkeye isn’t alone when he realizes who he’s dealing with, however, as he turns to his former teammate James Rhodes, War Machine, for some additional firepower.  He gets a new and improved version of his old sky-cycle (with his recent ride in Avenging Spider-Man #4 looking a LOT like this version of the sky-cycle), as well as a new costume for the ‘90s (which ironically wouldn’t even last two years, as he would soon get yet ANOTHER new costume, which would last for about as long).

The writing at-times can be a bit clunky in the four-issue mini-series, but it’s not much of a surprise given the time period it was written in.  Chuck Dixon does do a fairly good job at putting this story together, and although there are some elements which can be cringe-worthy, particularly some of the dialogue and the use of Rover (not to mention the actual name Rover), Dixon actually does write a moving story centering on Clint Barton.  Clint can be a difficult character to write successfully, and part of that is because he’s changed so much between different writers who have used him in their stories.  He has been the brash Avenger, calling out Captain America constantly, he’s been an overconfident blowhard, a well-tempered leader, a wise-cracking smart-ass who gets away with it because of how talented he is and how good his instincts are; he’s truly been it all.  But in these issues Dixon really pulls back what Hawkeye had been until this point and explores just what’s going on with him, how the loss of Mockingbird has affected him, and why he’s decided to pull away from anyone and anything that could remind him of his late wife.  The artwork in the mini-series is handled by Scott Kolins, and to be honest I really didn’t recognize the artwork as being his, and even after reading the credits, it can be hard to see Kolins’ signature style at work here.  Given the year it was created, it was very early in Kolins’ career, before he found and refined his own personal style, so if you were picking this collection up for his artwork you might be a bit disappointed.  Not because his artwork isn’t good, because it is, very moody and atmospheric, but it also didn’t FEEL like his work.

The second story is nowhere near as strong as the first, with Yomtov, a name I’ve never heard of before, handling the story, as US Agent goes looking for Hawkeye, irritated about how he’s gone off the grid after the dissolution of the Avengers West Coast.  There’s a common trope in superhero comic books regarding the classic structure of a team-up: first, you fight each other, because of a misunderstanding, then you realize your misunderstanding, and team up against a mutual foe.  This story is like a  bad version of that trope, taken to its most ridiculous extremes, for no apparent reason.  US Agent is furious at Hawkeye, but it never quite makes sense just WHY he’s that mad, or why he would even care, and yet he goes after Hawkeye in a real major way, leading to a knock-down, drag-out fight between the two of them.  The anger in the story just doesn’t make sense for either characters, and lacks a true understanding of either character by Yomtov, and the artwork by Jerry DeCaire doesn’t help matters in the least.  DeCaire’s name is yet another that I don’t recognize, and after reading this Hawkeye/US Agent story, I can see why.  The artwork isn’t all that enjoyable, it’s very dark and tries to be moody, but just succeeds in a dreary-looking comic book.  The story ends promising that Hawkeye will soon pay a visit to Force Works, yet sadly none of that is shown here in this collection.

Instead, the collection jumps ahead four years to a one-shot that came out in 1998, during the first year of the newly-launched Avengers book that came out of Heroes Return, which brought the Avengers and Fantastic Four back into the Marvel Universe proper.  It’s easy to get reader’s whiplash from reading this story right after the one preceding it, because it sees a very different Hawkeye from the first two stories in the collection.  Once again Hawkeye is his sarcastic, fun-loving self, taking new Avengers Justice and Firestar under his wing as they take on the super-villain Taskmaster.  Considering how much had happened to the character in the interim, it makes sense why he’s so different, and back to being the classic rendition of his character, but it would have helped the reading experience if a note of some kind had been inserted into the collection to explain what had happened in the interim, as the first two stories were essentially back-to-back chronologically.  This last Hawkeye story serves as a nice read, and goes along well with the recently released Avengers Assemble Volume 1 trade paperback, which covered the first year of that Avengers title, that this issue was set during.  In fact, reading this issue gives further context for why Hawkeye decided to leave the Avengers and join the Thunderbolts so that he could reform the former super-villains, and give them the same opportunity that he got back when he was a super-villain (prior to Avengers #16).  DeFalco does a good job on the story, keeping it fun and light, with a trio of artists pitching in on the one-shot, Jeff Johnson, Dave Ross and Mark Bagley.  Mark Bagley’s work is fantastic, and considering that he was penciling Thunderbolts at the same time goes to show just how talented the man is, that he can multi-task on various different projects at the same time in such an effortless fashion, without the quality diminishing in the least.

Overall, the collection is a bit uneven overall, but if you’re a fan of Hawkeye, it’s a more than worthwhile purchase/read, as it fleshes out the character, and shows a different aspect to the character than has typically been shown throughout his history.