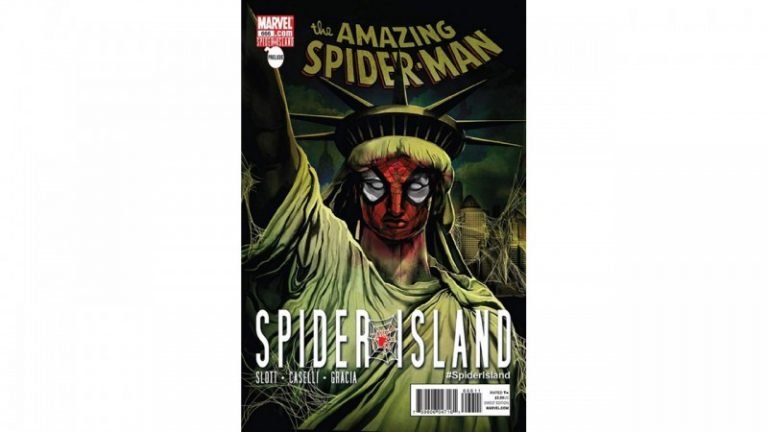 This issue of Amazing Spider-Man acts as the prelude to SPIDER-ISLAND, this year’s major Spider-event, and is definitely a great jumping-on point for readers interested in all the hype and promotional material.Whereas last issue was much more character-focused on Peter Parker and his friendship with Betty Brant, this issue is far more sporadic, jumping around from character to character, so that readers are brought up to date on the current happenings of the supporting cast entering this big event.As a result, the issue lacks some focus, as it jumps around, but thankfully the bite-sized character-pieces are quite well written and enjoyable.

Since Spider-Island will be transforming all of New York City into spider-powered super-beings, it makes sense to have Slott re-acquiant readers with all of the members of Spider-Man’s supporting cast, as they’ll soon have super-powers.We also get glimpses of what the future might bring Peter Parker in the way of Madame Web, and a serious hint at a possible development in the Jackal storyline, as we learn more of who might be pulling his strings, as well as the identities of his helpers.

The artwork by Caselli isn’t the most obvious fit for this book, but he manages to pull it off quite well, giving the book a very unique and standalone look.The visuals sparkle, there’s a great deal of energy in the line work, and the visuals pop off the page.

The end of this issue is what really grabbed me as a reader, as with the Jackal being in a comic, it’s hard to not think of his last appearance in the Spider-books, during the Clone Saga. Given the hints here, plus recent artwork shown at Comicon, it’s hard not to come to the natural conclusion that this issue showed us the return of Ben Reilly to the Marvel Universe. I definitely hope so, and hope that we see him in a more normal physical form soon enough, if it does indeed prove to be him. Recommended!

The end of this issue is what really grabbed me as a reader, as with the Jackal being in a comic, it’s hard to not think of his last appearance in the Spider-books, during the Clone Saga.
REVIEW SCORE
8
File Under: