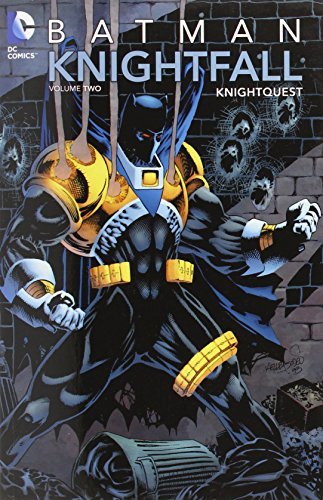 There was a time in a place called the 90’s when a broken Batman passed on his crimefighting identity to a religious zealot named Jean-Paul Valley. In retrospect, it probably wasn’t the caped crusader’s smartest move, but it did make for one of the most significant changes to the Batman mythos. Now, fresh of the publication of Batman Knightfall Omnibus Volume 1, DC Comics has released a second collection and boy is it something!

Right off the bat, it’s important to note that Knightquest is a massive collection. It contains an amalgamation of over 20 issues, spanning 976 pages and isn’t meant to be read in one sitting, which actually works in its favour. The fact is that you would have a hard time reading all of the pages in a row and enjoying it because there is very little change to Jean-Paul’s story arc throughout.

As for the story, the series picks up with a crippled Bruce Wayne travelling the world and trying to find a way to regain his ability to walk.  Meanwhile, in the Batcave, Jean-Paul Valley is fresh off of defeating Bane and is in the process of figuring out how to be Batman. This angle is a very interesting one, especially during the period when this story originally came out, as Knightquest was the first time that someone other than Bruce Wayne had taken up the cape and cowl. If you are entering this collection wanting an in-depth look at Bruce’s journey from broken man back to caped crimefighter, you’re going to be disappointed as this is very much Jean’s book.

Speaking of Jean-Paul, he is very much a man tormented and driven by two masters: his religious zealot past in the order of St. Dumas and his responsibility as the heir to the Batman legacy. He views Batman’s mission as one worth fighting but believes that Batman doesn’t go far enough in dealing with criminals. While this is an interesting concept, it’s mostly handled in an over the top and exposition-laden way; and since this collection features such a plethora of stories, his inner battle tends to get old rather fast. That being said, while Jean-Paul is rather one-note, writers Doug Moench, Chuck Dixon, and Alan Grant manage to make the villains and inhabitants of Gotham City rather memorable.

Throughout the compendium, Jean-Paul faces off against a number of established Batman villains like the Joker and Lady Clayface, as well as some solid new ones, the standout being a serial killer named Abattoir. Abbatoir ends up featuring in a number of issues and Jean-Paul ends up failing to stop him from murdering a number of people before their final confrontation. Also, the way in which Abbatoir’s story arc ends is very much the tipping point that leads into Volume 3 and the eventual return of Bruce Wayne. The art duties are handled by Mike Manley, Graham Nolan, Bret Blevins, Vince Giarrano and while they all provide solid work, Nolan is very much the standout. Nolan manages to inject life into the scripts that he’s provided with background gags and small details that manage to elevate the overall product.

In many ways, Knightquest is very much a book that feels like it was created in the 90’s as inner monologues are everywhere and action is the order of the day every day. While it may not match up with the complexity of some stories that we’ve seen in the past few years, like Saga and Mr. Miracle, there is something oddly endearing about Batman Knightfall, like a warm glass of milk, albeit a pricey one.

Although this is a pricey entry into the franchise, it is a comfortable and nostalgic return to the Batman of the 90s, and an overall enjoyable read.
REVIEW SCORE
7.0
File Under: Comics