Until this review I never read a Guardians of the Galaxy comic. If it weren’t for the awesome movie in the Marvel Cinematic Universe, I may have never cared for them and missed out on some incredible adventures. Guardians of the Galaxy Volume 1: Emperor Quill is a great introduction for any reader to jump into because it feels and reads like it’s in the same universe as the film, albeit with some new additions to the cast that I greatly enjoyed.

The latest threat to the entire galaxy is Hala, one of the last members of the Kree race after Peter Quill’s (Star-Lord’s) father destroyed their home planet. Hala is out for vengeance on Quill’s family and wants to destroy everything he holds dear, including the planet Spartax, where he now resides as king, as well as his home on Earth. With strength on par to Ronan the Accuser, Hala proves to be quite the challenge for our band of heroes. 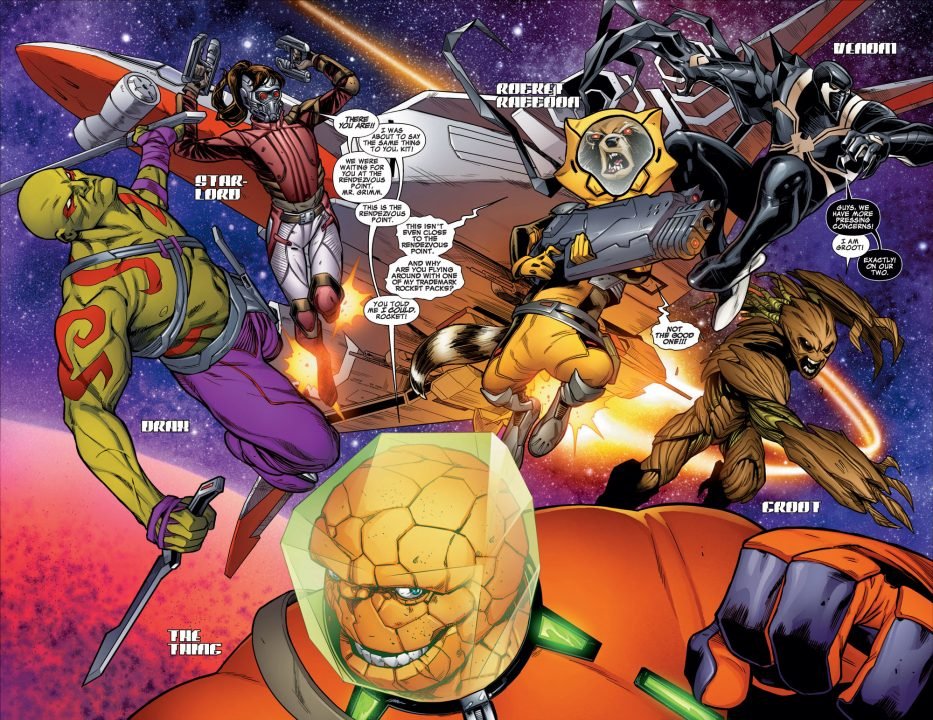 The Guardians themselves are going through a number of changes, with Quill sitting on a throne instead of commanding a ship, the position of Star-Lord has been acquired by his fiancée, Kitty Pryde while Rocket Raccoon proudly fills the leadership role of the team. The new member I’m most excited for is Ben Grimm, The Thing, who finally gets to be the space-loving nut he was always meant to be. After acquiring a piece of Chitauri tech they can’t analyze, the Guardians decide to visit their old Star-Lord to find out if they’ve struck gold or risk being destroyed by a bomb.

The center conflict behind this volume, besides Hala, is Peter’s feigning interest in being Spartax’s king. While he’s happy that he gets to be Spartax’s posterboy and protector, he hates the unexciting life of board meetings and politics. Peter is the type of character to find life exciting when it’s in danger and this is the crux of his inner turmoil. When Hala begins her acts of vengeance, Peter’s charisma and passion finally reappear as he fights alongside the Guardians, but he also begins to show the qualities of a powerful king as he prioritizes the safety of his people during the battle.

After Hala is defeated, the Guardians only take a moments rest before encountering the Destroyer of Destroyers, Yotat. It’s at this exact point that the book’s last quarter begins to feel like filler. Yotat is a simple bit-part villain whose only purpose in the book is to give some spotlight action sequences to the secondary Guardians in the story, Drax and Venom. The fight with Hala concludes perfectly, but in an excuse to add more pages, the story continues on to introduce a weak conflict and create a poor conclusion. Instead of introducing Yotat just as the tension and drama reached its climax, I would’ve greatly preferred if he was brought in at the beginning as a fun misadventure or plot device to get to Spartax, instead of the chitauri tech that never actually gets analyzed.

Volume 1 of Guardians of the Galaxy is a thrilling read. Despite suffering from some poor plot structure and a weak last quarter, Brian Michael Bendis writes the Guardians in a way that feels just like the MCU movie. The humour is on point and I constantly laughed throughout, even during action sequences. For readers looking to get a jump on point in the comics, Guardians of the Galaxy Volume 1: Emperor Quill is definitely a book you should consider.