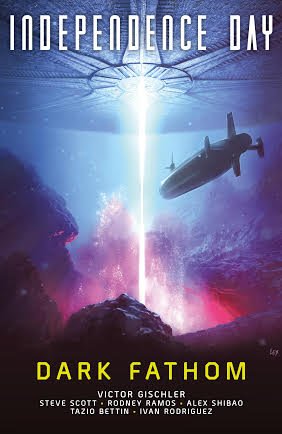 I never thought that one day I’d be able to use the phrase “Independence Day lore.” But here we are, 20 years removed from the original standalone film, about to look a potential trilogy square in the face. On top of that, we have Dark Fathom—a five-issue comic series—that seeks to link the original movie with the sequel, Resurgence.

Kicking off with a recovery mission to gather an alien craft at the bottom of an ocean on July 4, 1996, Dark Fathom starts off with a bang. There are plenty of nostalgic callbacks to be had (the camera control for the team’s submarine looks suspiciously like a PlayStation controller), and the art style has a good mix of dystopian purple and red hues, with calming blues and greens. Soon enough the calm is broken, and a firefight ensues with an alien aboard the sunken craft—then we’re off to the races. Dark Fathom does a decent job of immediately incorporating you back into the world of ID4 (the scene where the alien is communicating through Dr. Brackish Okun came rushing back), and the pacing is spot on. As for the cast, they aren’t wholly interesting right away, but they’re not annoying either, which makes for a smooth read.

We get to see the alien race in their (sort of) natural habitat, which was only given to us as a very short glimpse at the end of Independence Day. They’re nothing short of terrifying, though I can’t help but feel like there’s something missing here as I progressed through Dark Fathom. It’s very cool to see how humans came to acquire the knowledge to understand how the aliens tick, but since we know that most of the impending Earth invasion was stopped by Will Smith and Jeff Goldblum, the global stakes aren’t nearly as high. Also again, I never connected with the characters even after getting through all five issues, especially when many of the lines are merely iterations of “move your ass, soldier.”

Because Dark Fathom focuses only on this one mission and group the entire time, it attempts to make an effort to connect us to them. Unfortunately it just ends up being more of a one-note narrative. A lot of that washes away when more of the ship is explored, and we get more insight page after page, granted. Even though it’s just a tiny skirmish beneath the sea there is a palpable sense of tension and desperation from the group, which will no doubt play out on a wider scale soon enough. Plus, the massive timeline at the end of the trade is a nice touch, providing us with detailed updates of every major advancement from 1996 to 2016.

Independence Day: Resurgence looks like a lot of fun (I really dig the XCOM vibe I’m getting from the trailers, where the Earth is using the aliens’ own technology against them), but you can probably skip Dark Fathom. Then again, if you’re a really big fan of the new film and find yourself watching the original Independence Day all over again and crave more, you could do a whole lot worse.

Independence Day: Resurgence looks like a lot of fun, but you can probably skip Dark Fathom.
REVIEW SCORE
6.5
File Under: Comics