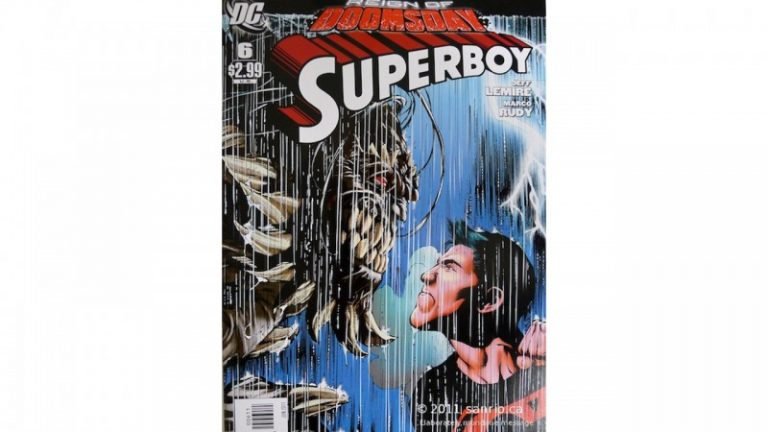 I guess things are a tinge too manic for Connor in historical Smallville. This issue commences with Superboy and Red Robin partaking in a heart-to-heart. Conner contemplating about leaving his adopted hometown in search of a new and less frenzied township, like Detroit. Taking Conner out of Smallville for an issue is nice interruption from the usual high-school drama associated with this series.

While on this clueless yet epiphanic pilgrimage of pioneering, Superboy is waylaid by Doomsday; not a normal Doomsday either. He has somehow procured the ability to assimilate powers. During the challenging fray, Doomsday grows more formidable and tenacious while Superboy critically defeated. The skirmish is rousing, and reminiscent of Superman’s death, but some of the illustrations look hastily muddled.

In the end, Doomsday totes the traumatized and trounced Superboy into space. Obviously, this is a tie-in to Action Comics #900. With Lex’s godlike powers and now Doomsday added to the farrago, the ramifications of Superman’s anticipated return will culminate in a universe altering brawl

I guess things are a tinge too manic for Connor in historical Smallville. This issue commences with Superboy and Red Robin partaking in a heart-to-heart.
REVIEW SCORE
5
File Under: Comics