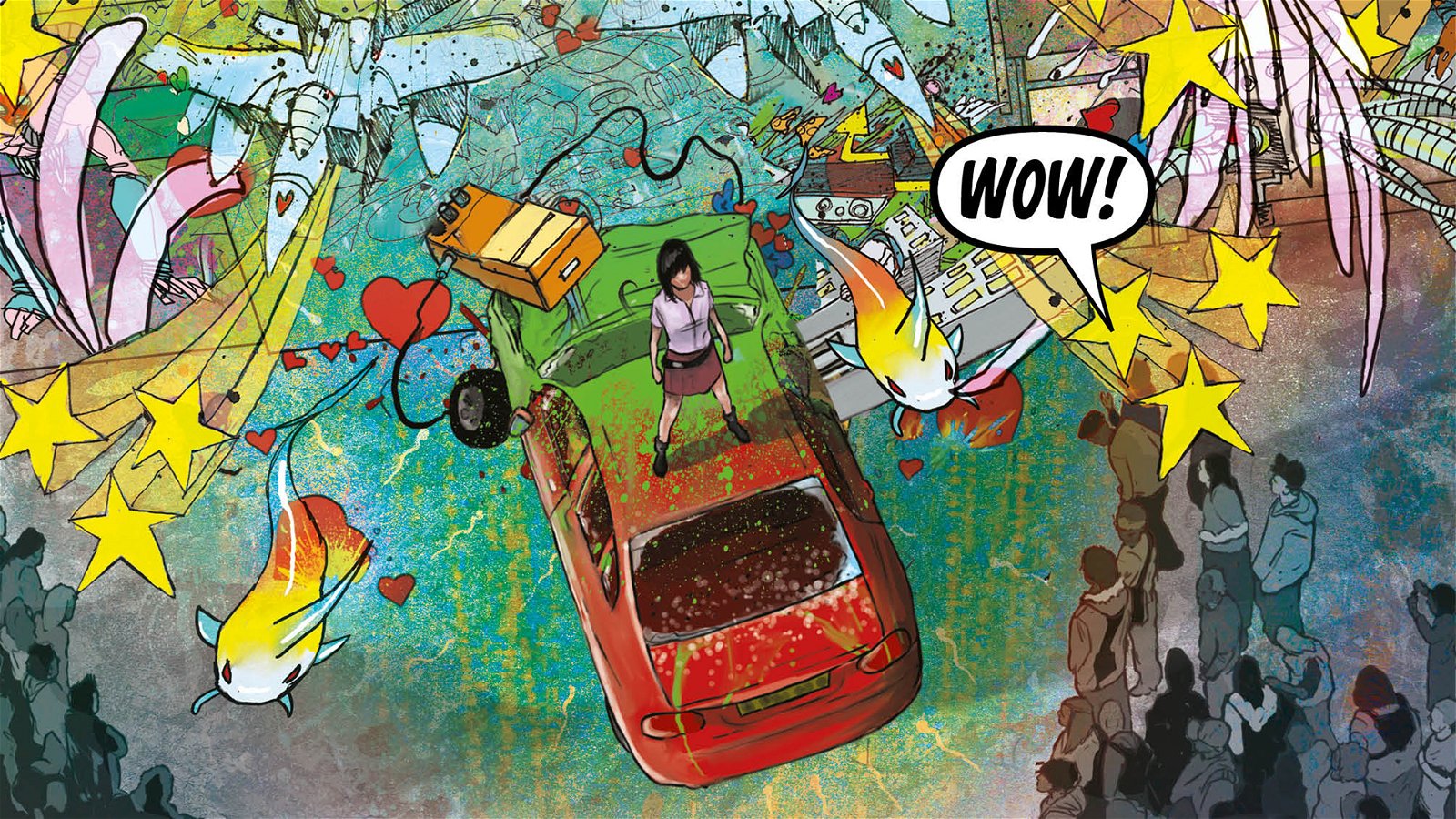 October 2013 saw the release of Death Sentence #1, a new take on the superhero genre from Monty Nero and Mike Dowling. Promoted by comics scribe Mark Millar, the series grew in both sales and popularity, earning critical acclaim over its six-issue run. Now Nero is back with Death Sentence: London, the new ongoing series that continues his story. Working with up-and-coming artist Martin Simmonds, the first collected volume is a violent showcase of creativity and skill from the team.

For those who missed the original miniseries, here are a few of the important points: A new, sexually transmitted virus known as the G+ virus is spreading across the developed world. The virus enhances its host, giving them superhuman abilities and, in some rare instances, full-fledged superpowers. The catch? All those infected have only six months to live. It’s within this new landscape that three separate individuals are granted great power. Monty is given power over people’s minds, Verity can manipulate light, and Weasel can phase through objects. What follows is Monty’s violent takeover of London and the cataclysmic fight to stop his rise to power.

Death Sentence: London picks up directly after the events of the previous series, shifting the focus of the story to some new characters as the world struggles to cope with the disaster in London. The first of these is Jeb, an undercover FBI agent who has infiltrated a terrorist group led by a superpowered individual. Meanwhile, a street rivalry between two superpowered drug dealers heats up in London. These two have manifested powers symbolic of life and death. Roots, with power over plant life, and Retch with the power to kill using a simple touch. Throughout the pages, Verity’s powers continue to grow as she evades government agents intent on capturing or killing her.

The book’s multiple storylines converge as the world governments try and put a stop to the G+ infection; whether by finding a cure or destroying all those infected. The plot lines are intricate, making it almost impossible to describe how they all fit together succinctly, but Nero finds a way to bring all of his characters together in the final pages of the volume in an organic (though a little rushed) way. As Death Sentence: London is a new ongoing series rather than another miniseries, the final pages offer more questions than answers and pave the way for the next story arc.

As with the first series, Nero’s premise is solid and refreshing, painting superheroes in an entirely different light than what’s typical of the medium. The idea of superpowers as a symptom and a precursor to death rather than a gift opens up unique avenues of exploration for the series. Seeing the characters cope with their mortality and how they each choose to spend their final six months gives a greater insight into their characters than even the dialogue can. It should be noted that the dialogue throughout the book is another highlight. Each character delivers solid, believable lines that feel natural even in the context of the supernatural story.

At its core, Death Sentence: London and its predecessor are social satires driven by angry, punk rock-infused sensibilities. There’s an anger present in the writing, embodying multiple struggles of individuals against the state. The book targets everything from police violence to civil protest to organized religion, painting a bleak dystopia while empowering the downtrodden with superhuman gifts. There’s a lot to read into in these pages, but therein also lies the book’s weakness. With so much to say, the final third of the book loses its focus, presenting a muddled conflict that goes off the rails. By broadening the ideas of the first in this sequel series, the writing loses some of its edge. This leads to the final conflict of the book feeling almost meaningless, the ideological fight abandoned for an exciting fight scene. Though the journey through these issues is consistently entertaining, it fumbles with its deeper themes.

One aspect of the book that never breaks its stride is the artwork. Simmonds was involved with some small press projects prior to Death Sentence, including VS Comics’ Eponymous, but this is his first project with really wide distribution. It’s a stunning addition to the artist’s portfolio, and one that deserves attention.

To say that the book is gorgeous misses the real truth of the matter. Yes, Simmonds renders these characters with great attention to detail, capturing the nuances of their expression and giving them a sense of motion. The painted backgrounds, while often plain, frame the characters in moody lights shifting from violent reds to placating blues. But it’s when things get crazy, when the action ramps up and the character’s powers are unleashed, that the art becomes truly impressive.

Verity’s powers over light have evolved, allowing her to essentially create moving paintings in the world around her. When her powers manifest, the panels are filled with vibrant green flashes of light, simple 2D drawings engulfing all of the more detailed characters. When Roots battles Retch, shooting green vines are surrounded by rotting figures, life and death clashing in streets awash with flames, Simmonds confidently guides the numerous characters and their powers through the set pieces. These scenes could easily have been overwhelming to the point of inexplicability, but smart layouts and plotting from both creators keep things clear.

Though the story does overextend itself at times, Death Sentence: London is a worthy successor to the 2014 breakout hit. Fans of the original will find a lot to enjoy here, and newcomers won’t be too overwhelmed by Nero’s dark, fascinating world. If you’re looking for a unique take on superpowers or some genuinely awe-inspiring artwork, this is the book for you.

This first collected volume is a violent showcase of creativity and skill from the creators.